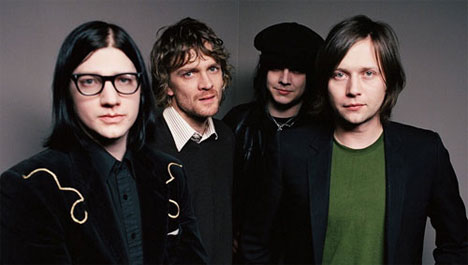 While the promised downloadable content flood for Neversoft’s Guitar Hero III: Legends of Rock was only nice in theory, it looks like they’re off to a good start for the just-released Guitar Hero World Tour.

Today, Activision has confirmed that Jimi Hendrix and The Raconteurs track packs will be made available come November. The Jimi Hendrix pack will feature “If 6 Was 9,” “Little Wing,” and a live version of “Fire” on November 13; The Raconteurs make their videogame debut with “Salute Your Solution,” “Hold Up,” and “Consoler of the Lonely” on November 20.

Guitar Hero World Tour owners, do you plan on putting out additional money for downloadable content, and are these the tracks that will make you open your wallets?

Already confirmed to take center stage as a playable character, Jimi Hendrix, one of the most creative and influential musicians of the 20th century, will return with three additional downloadable master tracks. The blues track “If 6 was 9,” rhythm and blues classic “Little Wing,” and a live version of the iconic Hendrix track “Fire” will all be available as downloadable content for Guitar Hero World Tour on November 13th, 2008.

Making their debut appearance in a videogame, charismatic rockers, The Raconteurs are set to leave their mark with three tracks off their second album Consolers of the Lonely. The trio of “Salute Your Solution,” “Hold Up” and “Consoler of the Lonely” will debut as part of a three song set list on November 20th, 2008 that will allow virtual rockers the chance to experience the killer sounds of The Raconteurs like never before.

The Raconteurs Track Pack and Jimi Hendrix Track Pack will be available on Xbox LIVE(R) Marketplace for Xbox 360(R) video game and entertainment system from Microsoft for 440 Microsoft Points and on the PLAYSTATION(R)Store for the PLAYSTATION(R)3 computer entertainment system for $5.49. In addition, the three tracks from The Raconteurs Track Pack will be released as single downloadable songs for Xbox 360 for 160 Microsoft Points, PLAYSTATION 3 system for $1.99 and Nintendo(R) Wi-Fi Connection for Wii(TM) for 200 Wii Points.

When the house lights go down, a new generation of guitarists, drummers and fearless frontmen will come together and rock with Guitar Hero World Tour. The latest installment in the #1 best-selling video game franchise of 2007, Guitar Hero World Tour transforms music gaming by expanding Guitar Hero’s signature guitar gameplay into a cooperative band experience that combines the most advanced wireless controllers with new revolutionary online* and offline gameplay modes including Band Career and 8-player “Battle of the Bands,” which allows two full bands to compete head-to-head online. The game features a slick newly redesigned guitar controller, drum kit controller and a microphone, as well as an innovative Music Studio music creator that lets players compose, record, edit and share their own rock ‘n’ roll anthems. Music creators are also able to share their recordings with their friends online through GHTunes(SM) where other gamers can download and play an endless supply of unique creations.