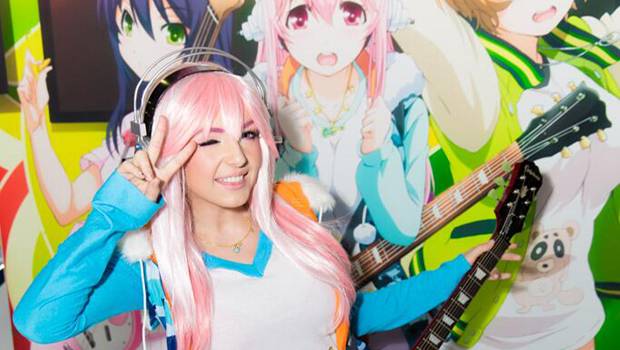 Jessica Nigri first showed up on my radar after she cosplayed Curly Brace from Cave Story. Applying that level of detail and craftsmanship to a relatively obscure character is the sign of a cosplayer who isn’t in it just for the potential fame and fortune. Yet hear we are, years later, and Nigri has become a headliner in her own right. I got to talk to her back when she was touring as Juliet Starling from Lollipop Chainsaw, just as her star was starting to rise. It was downright heartwarming to see how earnestly and humbly she accepted her growing popularity. I’m still kinda ticked at PAX for kicking her out of the show.

Now Nigri’s taking on the role Super Sonico, a fictional idol created by game publisher Nitroplus back in 2006. Sonico was initially just a mascot for a Nitroplus music festival, but since then her star has been on the rise as well, going on to star in multiple games, manga, and anime. Jessica has been cosplaying Sonico for a little while now, but this is the first time that she’s officially voiced the character.

Nigri as Sonico is a perfect fit, as they are both icons for playful exhibitionism, passion for videogames, and self-aware silliness. I wonder if Nigri will be appearing as Sonico at PAX East this year? If so, could a Samus, Sagat, and Sonico crossover be in our future?