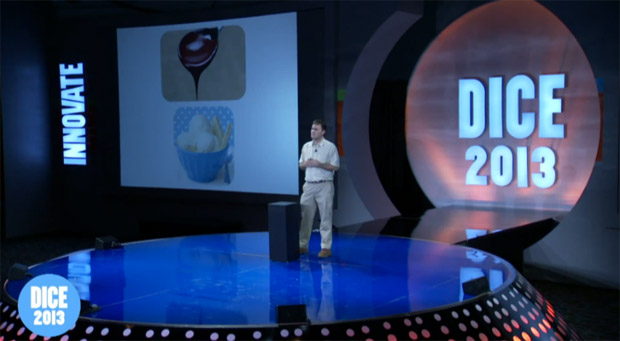 Dale has been at the 2013 D.I.C.E. Summit all week and left express instructions to pass along Schell Games CEO Jesse Schell’s keynote speech to you kind folks. Having now watching it myself, I have to agree — it’s an entertaining watch. He starts by examining some of the claims made three years ago in his popular talk about gamification, eventually covering such topics as psychologists throwing bad parties and being shamed by dead crops on Facebook.

The talk runs down the keys to utopia for game designers: magical interfaces, payment systems that feel fair, artificial intelligence that is more intelligent and less artificial, social gaming that truly connects families and friends, and games that will make players into the people they want to be. “If you can do those things, you’re taking some good steps,” says Schell.

“We’re shifting into an enjoyment-based economy. And nobody knows more about making enjoyment than game developers.” Schell believes that “Fake marketing bullshit just isn’t going to work any more. It used to work, in terms of getting games sold. In the world of free-to-play, it’s not going to work any more. In fact, making a good game isn’t good enough any more. You have to bring people a gateway to the promised land. Nothing less than that is going to work.”