As I was playing Hotel Dusk the other day, I was thinking that Kyle Hyde is a bit of a dick. Not bad enough to actually annoy you, but enough for you to notice he could probably use an enema. It set off a conversation between myself and Aaron Linde about all the characters we’ve met over our illustrious gaming careers that we love to hate. I know everybody has them, so I want to hear about it in the comments. In the meantime, here are the bitches that have garnered our rage. 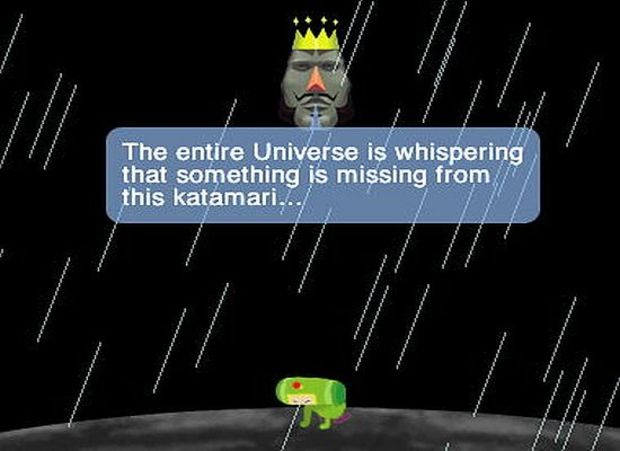 1. King of all Cosmos / Katamari Damacy

My, Earth is really full of things! We have thought about it, and in fact, I think we are a bit of a self important douchebag. What we can’t imagine is, why anyone would ever be offended by our self important tone, our homoerotic rainbow neckbolster, or our large sculpted package prominently displayed for all the world to see. Truly, we mean well. It’s just that nothing pleases us more than flogging our children while we lounge around and eat pie. Don’t hold it against us, really. It’s what we were born to do, you see.

If raccoons were like this in real life, I’d run over all of them with my car. The moment I entered Animal Crossing and therefore into his employ, Nook had my future planned out as if the abolition of slavery had never taken place. Every time I thought I had my debt paid off, there was scheming Tom Nook, ever so politely suggesting that I could have another loan. Nook is a businessman to the end, which in my mind is a good enough reason to set him on fire.

DIE. DIE. DIE. My hatred for this character is actually infinite. Sure, I’ll fight a Russian 5 times my size whose blood is coursing with the power of hard alcohol.  Why not? You’re getting your ass pummeled and laughing uproariously as you lie on the ground in a puddle of your own urine. Don’t even get me started on the laugh. I hear it echoing through my dreams sometimes (usually in correlation with the dream where I’m unexpectedly naked in front of a large group of people). This guy is the stuff that phobias are made of.

I will never understand how a guy with no mouth became one of the most enduring heroes of all time. Emo kids, look no further, because Cloud is your poster boy. Smartass attitude, treats other people like crap, yet somehow you’re supposed to sympathize with him because he had a hard childhood. You know what, guy? Everyone’s life sucks at some point or another. You don’t see us going around thefting other people’s identities to ease our bleeding hearts. Add on top of this that he somehow managed to ignore that Tifa (one of the greatest sets of tits of all time) wanted his junk and he brushed her off like an annoying gnat. Hero, my ass.

In gaming — hell, in general — there’s a rule that the President’s daughter must be weak, useless, and stupid. By Ashley’s example, we can observe the following: Presidential offspring have no sense of danger. They cannot identify a threat as it creeps slowly toward them, and will greet zombie dogs, infected townspeople, and oncoming trucks as they would some greased-up senator at a fancy dinner how-do. It’s a small wonder Ashley could leave her room without getting abducted, stabbed, shot, drowned, and burned alive, thus precluding the events of Resident Evil 4 in their entirety and leaving one Leon Kennedy open for the most thrilling mission in gaming history: installing brand new carpet.

Metal Gear Solid 2 was pretty sweet at first, wasn’t it? You, as Solid Snake, get to run around a tanker causing all kinds of havoc, chokin’ and shootin’ and gettin’ busy with the corpses of Russian soldiers — that is, until Raiden busts onto the scene and ruins it for everybody. Was he plucked from the ranks of Hot Topic middle-management? Maybe culled from the ranks of would-be Lord Byrons at the coffee house just as he was reading the first stanza of ‘My Heart is Black Like Blackberries, But Not Sweet Like Blackberries, Because That’s Not Sad’. No Solid Snake for you, buddy — for the rest of this convoluted, psychedelic trip into the deepest reaches of Kojima’s reptile-brain, you’re partying with Raiden. And guess what? He brought his girlfriend!

Greedy, pudgy little bastard whose quest for money, food, and glory runs parallel to Ness and the gang’s journey to save the world in Earthbound. This asshat’s encroachment upon your once sunny childhood begins when he asks you to accompany him in the middle of the night to find his brother that he abandoned near a pulsating meteor. It only gets worse from there, eventually leading to his position as the right-hand man of evil incarnate. Everybody knew a kid like Pokey growing up, and if you didn’t, chances are you were that kid. You little shit.

This one’s a personal beef, going out to all the homies who bit it at the hands of this tyrannical little bastard. Kid Icarus‘ Grim Reaper wasn’t even all that great at his job. One look at a little kid with a crappy dollar-store bow sends him into hysterics, jumping and flailing and freaking out, prompting him to send his kids in to lay waste to my pithy little form. That’s nice, Grim. Now I’ve gotta plow through an entire litter of Reaplings just to get you off my case. Some reapers actually inspire fear, you know, as part of the gig; you, on the other hand, might consider a career change. I heard the Olive Garden was looking for a new hostess, you pansy.