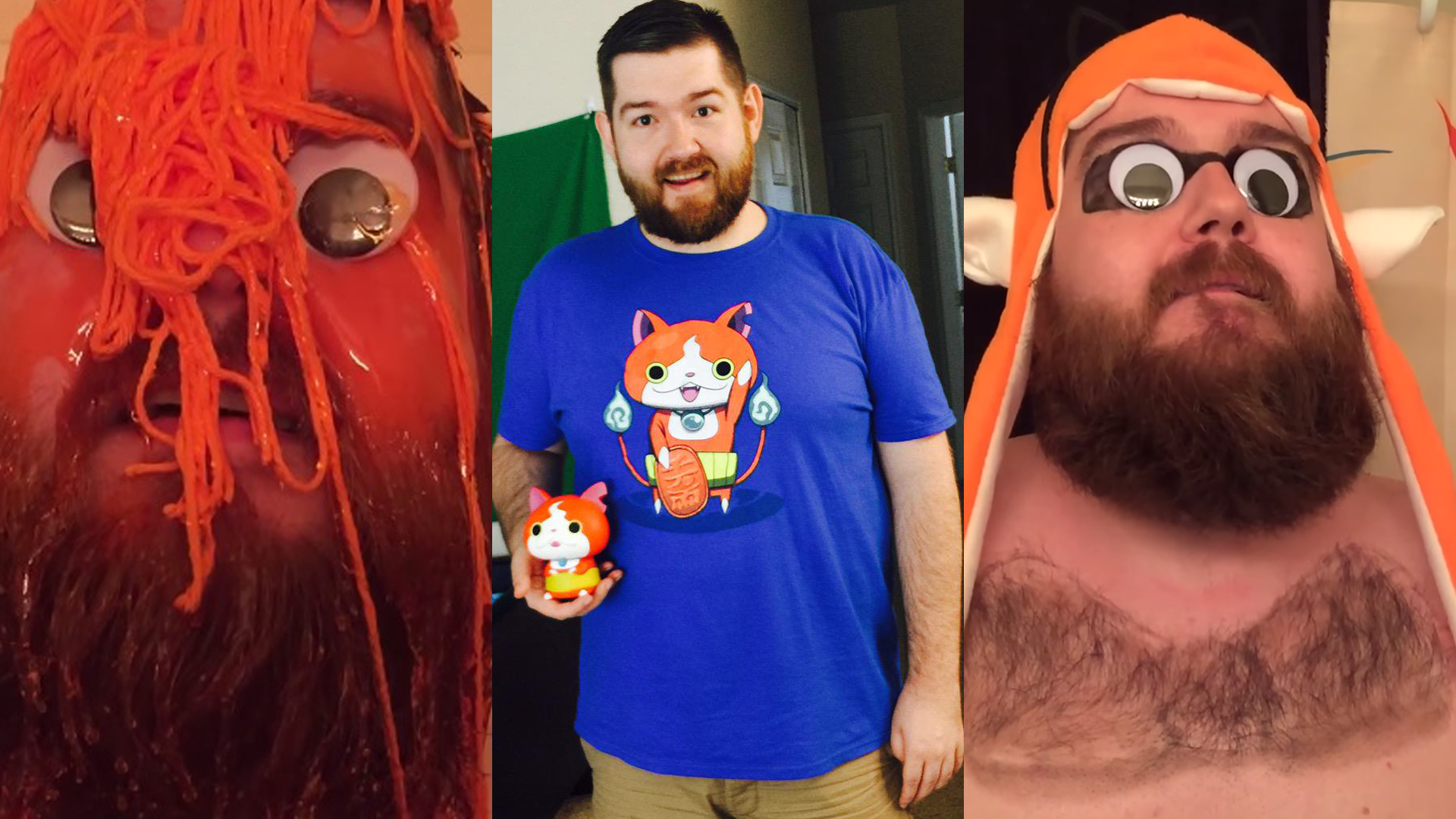 I’ve heard a lot of people say 2015 was one of the best years they can remember, gaming-wise, but I can’t say I agree. AAA titles last year were mostly more of the same, and most indie titles just didn’t click with me. 2015 was the year games launched as a shell with rest of the content held ransom behind ever more expensive season passes (even in one game on my list), microtransactions became increasingly prevalent in full-priced titles, sequels flooded the market, and too many remasters released.

But I’m not here to talk about what I didn’t like or didn’t play. I’m here to show some love to games I enjoyed over the year that I feel deserve recognition. So sit back, unzip, and get ready to be pleased by my list of the dankest games of 2015ish. 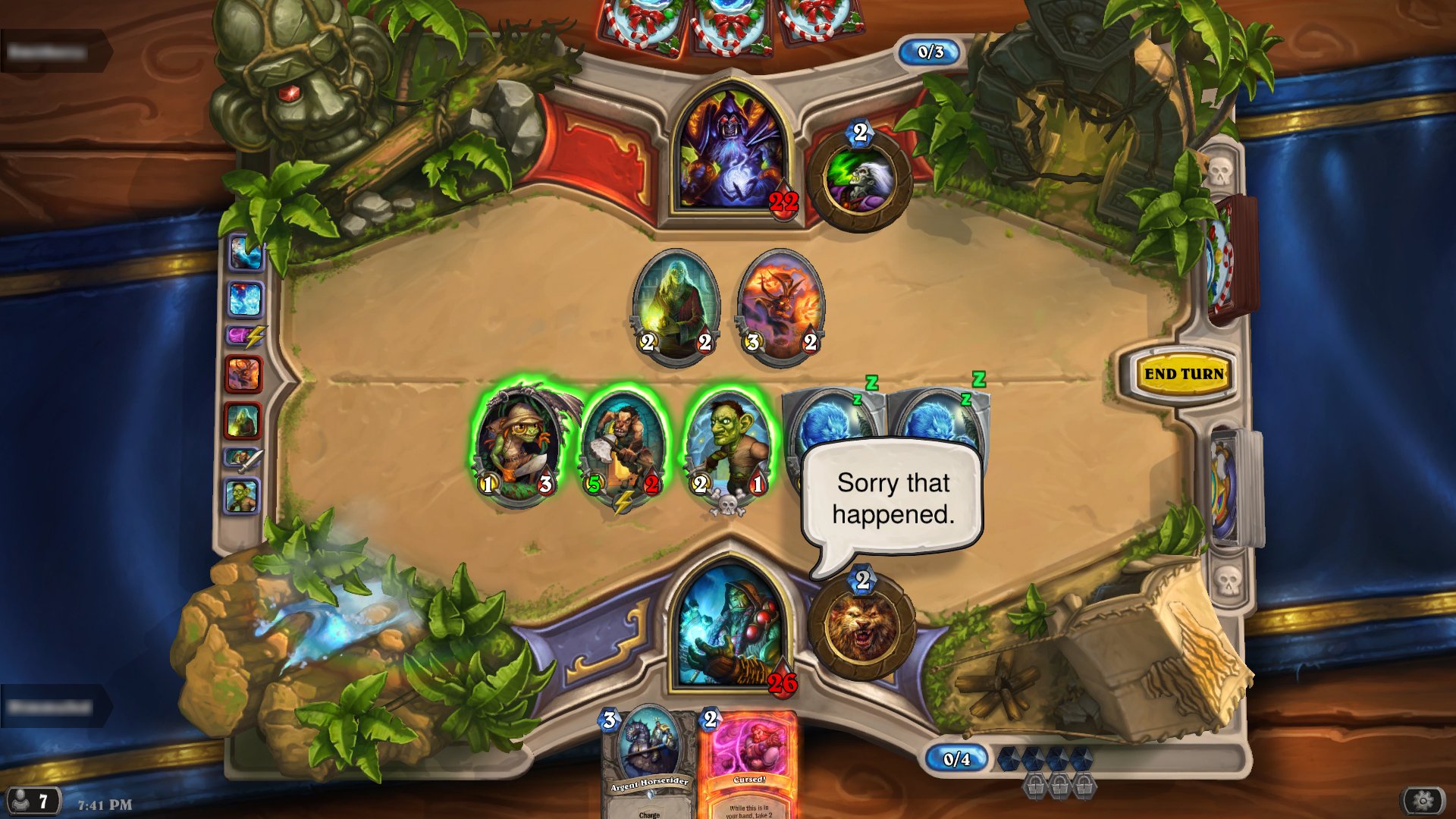 Hearthstone: Heroes of Warcraft is probably my most-played game of 2015 on an “amount of days played” basis, even if it released in 2014. During the past year alone, the game has added two single-player adventures, Blackrock Mountain and League of Explorers, as well as a new expansion called The Grand Tournament, amounting to over 200 cards. The metagame has changed drastically, which kept Hearthstone feeling fresh all through 2015 and is why it deserves a spot as one of my games of the year. Well played.

Her Story can arguably be boiled down to a search engine simulator mixed with FMV, but the narrative presented is so interesting and well acted that it is hard not to love. I purchased it one night during a sale and said to my boyfriend, “I’ve heard a lot of praise for this game. We should play it for a minute.” Over three hours later, I was still playing, engrossed in the murder mystery presented on-screen via interrogation videos.

Finding a new clip to watch and piecing together the mystery is exciting, even if on paper the plot almost seems like something you’d find in a Lifetime movie or soap opera. I can’t stress enough what an amazing story it is and how addictive Her Story becomes once you get started. YouTube videos can’t possibly do this one justice — just buy it and see for yourself without spoiling anything. 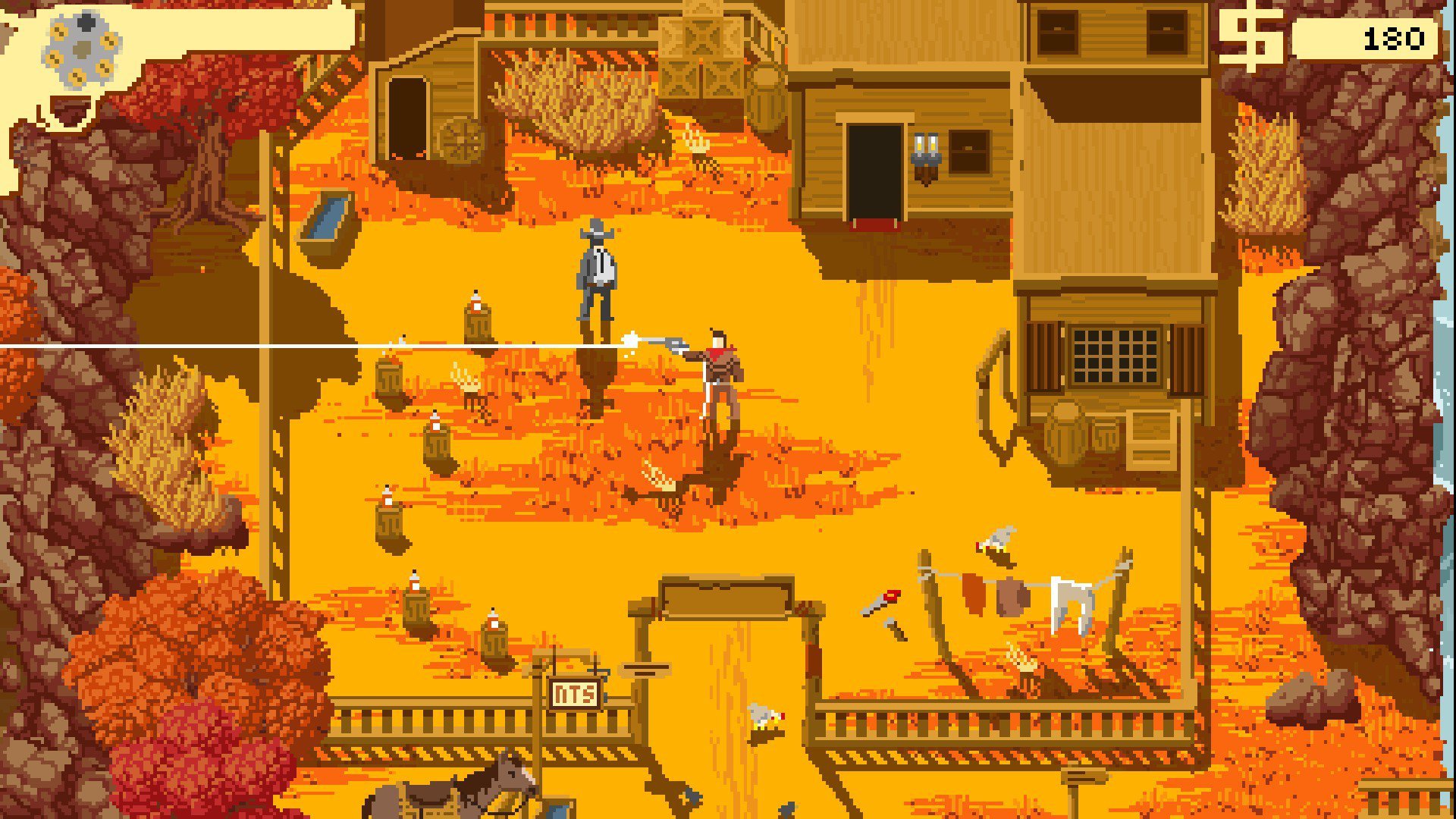 Westerado: Double Barreled is a rootin’ tootin’ heck of a great retro-styled western with a large dose of revenge. Each playthrough is randomly generated, but one thing stays the same: someone you love is brutally murdered, and you’re out for the kind of revenge that only cold steel can provide.

The style, the music, the writing, and the entire presentation are just fantastic, capturing the feel of old-timey spaghetti westerns better than any game I’ve ever played. That said, even if you aren’t a western fan, you can still find enjoyment in the true-to-cowboy-dialect writing. Yeehaw! 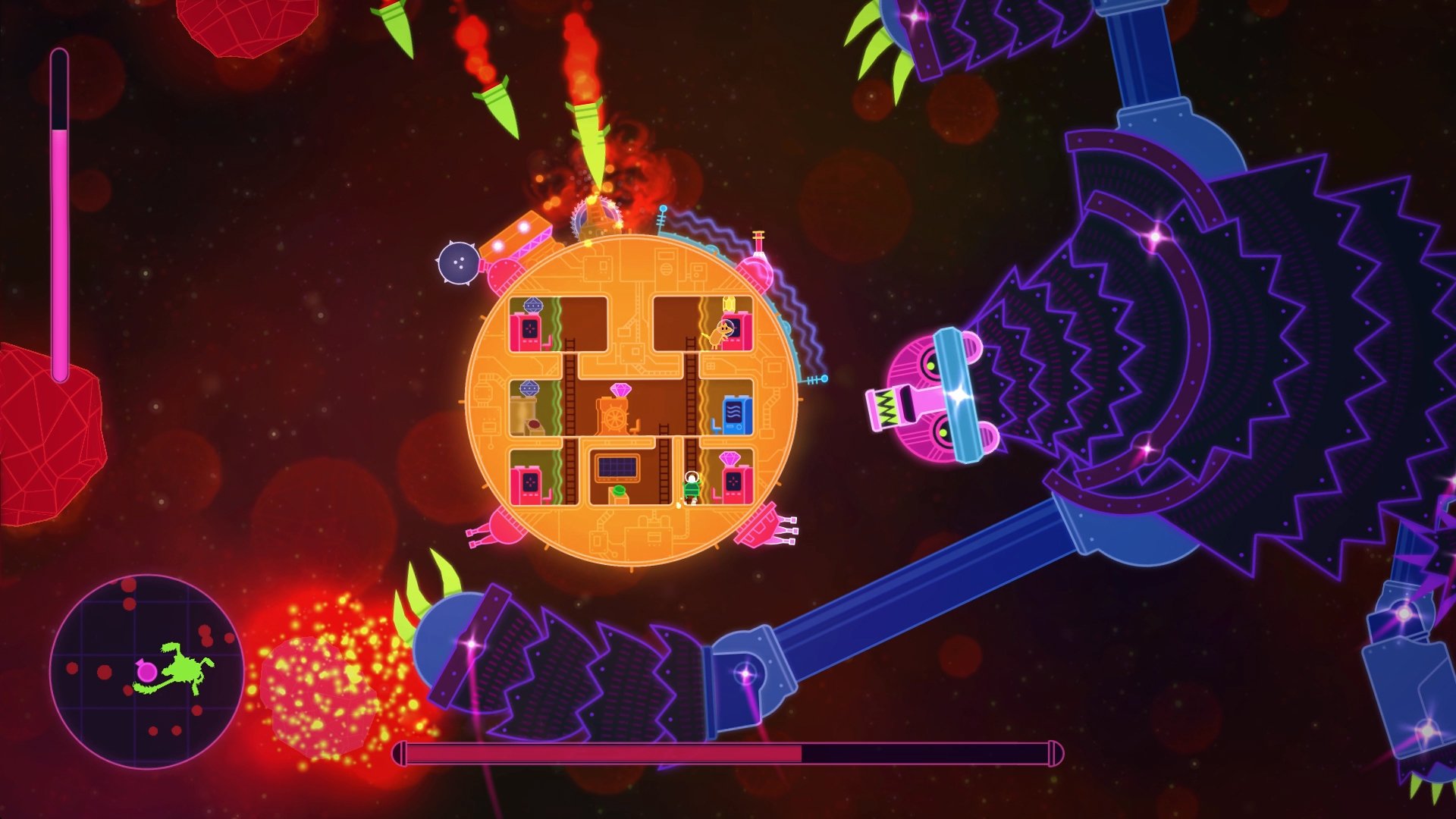 Lovers in a Dangerous Spacetime was meant to be played with a friend or lover, and when doing so, it is damned amazing. You and your partner work together to control a colorful spacecraft searching through space for kidnapped animal buddies. Controlling the ship is done by moving your chosen character around to various stations that handle specific functions including steering, weapons, shields, and so on.

It’s hands down the best co-op experience of the year, and possibly the past few years. Lovers is a must-own if you’ve got a special someone in your life who just wants to spend time with you doing your favorite hobby. I know my boyfriend and I love it.

Did you really think my list wouldn’t have Splatoon? Nintendo’s first shooter turned out to be the most original one in years and everything about the game is on point from the characters to the music, graphics, single-player, multiplayer, and even commercials.

Splatoon launched with what seemed like a small amount of content on paper, but since then Nintendo has continually released new weapons, levels, clothing, modes, and Splatfests to make up for it, and all for the low, low price of free. I just hope the rumored Octoling campaign DLC comes true in 2016! Also, in case you missed it the first time, watch Squid Now 2 here to basically see me naked. 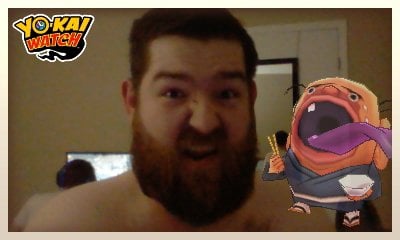 I’m going to be honest here: I haven’t even finished Yo-Kai Watch, but damn do I love it. Just look at this picture of me in my Jibanyan shirt with my Jibanyan piggy bank and try to tell me I don’t love Yo-Kai Watch.

What could be better than a game that combines Pokémon with cute and colorful ghosts who speak English? Not many games in 2015, that is for sure. The character designs alone make this one of my favorites of the year, and I’m sure I’ll love it even more when I get around to finishing it. 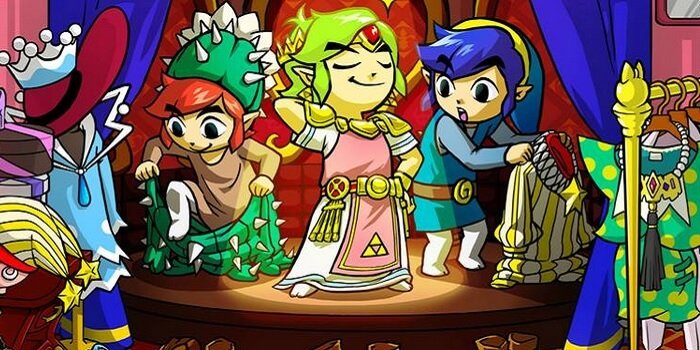 Speaking of games I love but haven’t had the time to finish, The Legend of Zelda: Tri Force Heroes is one of them. Dare I say this is the ‘gayest’ Zelda game that has ever existed, and I love it all the more for it? So many of the characters are just flamboyant and utterly fabulous. Mix that in with a multiplayer version of that familiar Zelda flavor and you’ve got yourself a great game. Perhaps the online is sometimes laggy, and other players aren’t always so good at communicating, but everyone has, at least, two friends to play with, right?

I still laugh every time someone does the cheerleader emote, causing Link to pop up on my screen with pom poms. So cute, so fun, so colorful, and arguably so gay, Tri Force Heroes deserves a spot in your 3DS collection. 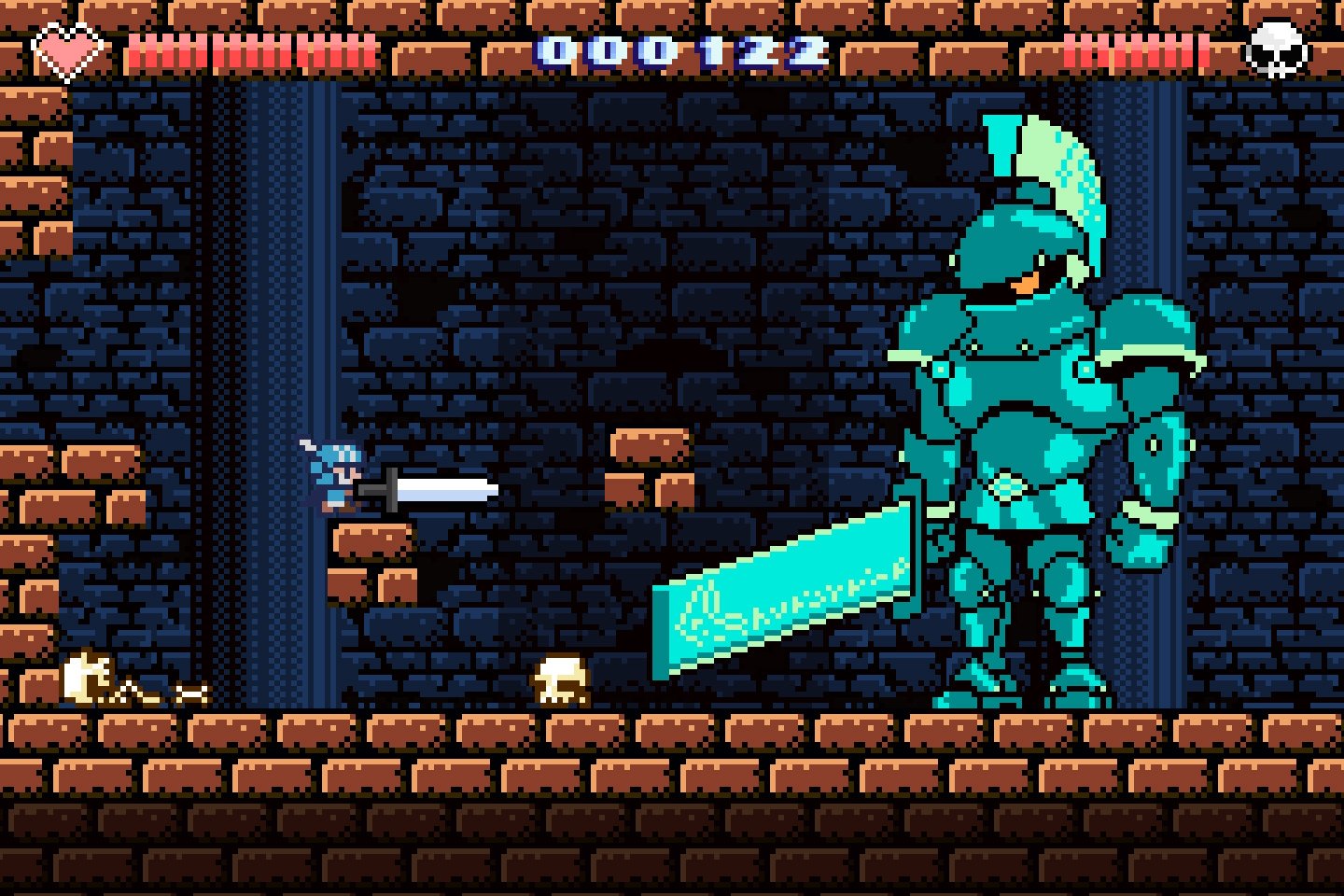 Castle in the Darkness is the one of those games that flew under the radar for most people while being one hell of a game. If Castlevania and Cave Story had a love child, this would be it.

For a game that costs $6, it is packed full of content. It took me around 16 hours just to 100 percent the campaign while unlocking two of the endings, and that is before I touched the other new game plus modes! While you’re slaying hundreds of different enemies and giant bosses in this non-linear affair, you’ll also be humming along to the best chiptune soundtrack I’ve heard in years and easily my favorite game soundtrack of 2015. Don’t believe me? Then give it a listen. What is more impressive is the game was mostly developed (completely developed?) by one person, Matt Kap, and that includes the soundtrack.

Even though it released in February, I’ve found myself thinking back to my time with Castle in the Darkness throughout 2015. It’s easily my favorite single-player game of the year. 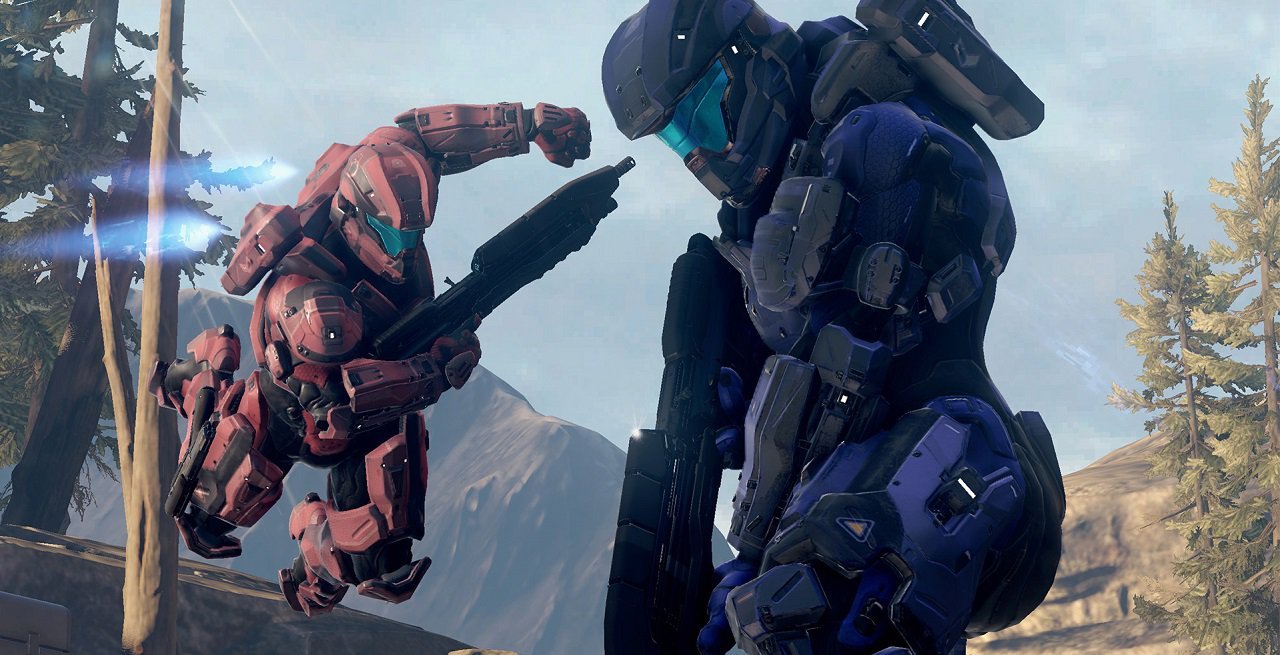 Halo 5: Guardians is my second-most-played game of 2015 and my favorite multiplayer game of the year. Sure, its campaign is easily one of the worst in the series (what were they thinking having you fight the same boss so many times?), but what shines here is the online experience.

343 Industries took the base multiplayer we came to know and love from previous titles and plucked mechanics from other shooters to make the overall best multiplayer experience in the series. Aiming down sights, unlimited sprinting, clamoring up ledges, spartan charging, and ground pounding are all welcome additions. While there are microtransactions available, they only offer up cosmetics and consumables and are quickly unlockable without spending a dime, however tempting that might be. Because of their inclusion, 343 has promised that all future maps and modes will be provided free of charge. Thus far, it has kept its promise by adding multiple maps and modes since launch.

After putting over 72 hours into the multiplayer, I’m happy to report that this is easily one of the most balanced Halo games, and one that will keep me playing for many more hours to come.

That does it for my main games of the year list, but I’d like to toss out some honorable mentions: