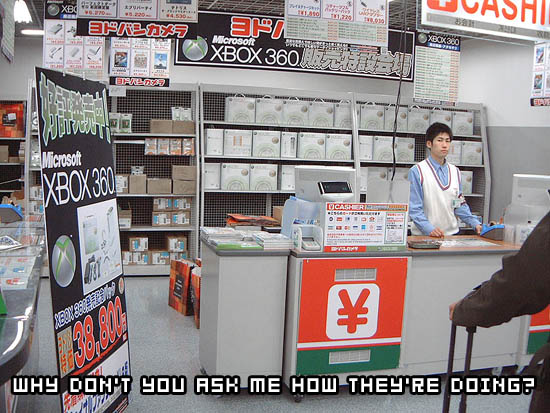 Gamespot’s article Spot On: Japanese devs sound off on 360 hits up game designers and execs on how they think Microsoft and their flagship console are doing in Japan. The lengthy piece digs deep, starting from back when the original Xbox launched in Japan all the way up until now, although it doesn’t really say much about the recent boost that Halo 3 has brought on.

The overall report gives the Xbox 360’s performance in Japan unfavorable marks, citing low Japanese sales numbers and a weak software lineup. Japanese game makers like Soul Calibur IV lead programmer Masaaki Hoshino believes that this software lineup is what needs the most attention. He says, “In order to succeed in Japan, [Microsoft] needs Japan-created content, not just a lot of foreign games that have been localized.” Ace Combat 6: Fires of Liberation director Natsuki Isaki agrees, “People think [foreign games] are difficult and there’s no guidance on how to clear the objectives.”

Hit the jump for more on the Xbox 360 in Japan.

And, as always, things point back to the lack of tried and true Japanese RPGs. Natsuki states, “I personally like games like Tom Clancy’s Rainbow Six Vegas, Gears of War, and Test Drive Unlimited, but I think Japanese players don’t want challenging, stressful, difficult games. Japanese players would rather have role-playing games with a slow tempo, where they are led and shown what to do. So, maybe games like Blue Dragon will start to change things. When more of those kind of games come on to the market, then I think more Japanese players will accept the 360.”

Things seem to be looking up in that respect, with Mistwalker’s Lost Odyssey and Square Enix’s Infinite Undiscovery on the way. Also, more Japan-centric Xbox Live games are in the works, coming from companies like Hudson and Treasure.

Microsoft is down in Japan, but definitely not out. Chubby controllers or not, if they manage bring out the games Japanese gamers want, the Xbox 360 might finally get the attention that North American gamers give it.

Read the full article at Gamespot.