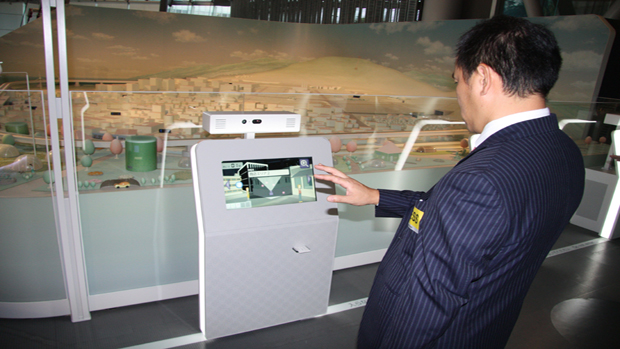 There’s been many things that the Kinect has been made to do that it wasn’t designed to. Some were fun. Some were silly. Some were interesting and have potential. And one would perhaps be called “blasphemous” by some.

The National Museum of Emerging Science and Innovation in Tokyo is a place where scientists can test and demonstrate their projects to their colleagues and the public, learn from the results, and take pride in the scientific advances they pursue. Three days ago, the media got a preview of two new exhibitions, one of which involves the Kinect.

The project is called “The Shape of Life in 2050” and is essentially a simulation of what some Japanese scientists will think life will be like, and allow you to interact with a 120m sq city they created, called “Itookashi City.”

The theory behind the world they created is that the Earth will become more limited, and that humans will try to realise their desires through constant research in scientific techniques, creating new ones, and changing society. All of this then feeds back to humanity wishing for more and starting the cycle again, meanwhile allowing us to view and study culture and society from a different point of view. The technology in the project involves a mixture of touchscreen, augmented reality (AR), and for now fairly basic gestures, all in front of the Kinect.

The demo starts off with you getting an entrance AR card, walking in and take a stroll around town. You then have to ability to become a citizen of the city, and then learn more about the place by interacting with up to 61 different inhabitants and the environment. Things they envisaged that would be in the environment involved items from many categories, including wearable computers and robotwear for clothes; plant factories and taste/smell displays for food; regenerative energy for fuel, a drug delivery system regarding medical treatment, and for traffic — one-man helicopters.

The next step the demo wants you to experience is to choose a piece of technology or science to incorporate into the city. The demo then simulates the effects it causes and ends with you ultimately seeing the consequences of your actions.

For all the stick the Kinect gets for being a gimmicky and pointless product, it’s great to see such interesting things that people are using the Kinect for. But then, I guess it’s supposed to be an exciting device for games and gamers first. Hopefully with more games like this in development, the future looks bright for Kinect.

Unfortunately there’s no convenient video illustrating how this project works. Instead, we’re left with plenty of screenshots, covered in tons of moonspeak. So try to visualise the project in your mind and ask yourselves if you ever thought the Kinect would be used to depict the future.