To Akiba and beyond

In the US, arcades are mostly a relic. On the east coast where I grew up, other than the overpriced Dave & Buster’s (and perhaps DisneyQuest, which is being closed down after 18 years in 2016), it’s really tough to find an arcade.

But in Japan, you don’t even need to really look — they’ll find you. With numerous Sega, Taito, and Don Quijote locations all across Tokyo, locating one is just a matter of time. In an effort to rediscover my roots and a passion I once was able to quell so often, I took a few trips to Akihabara “Electric Town,” and a few other places in Tokyo, to see how the scene is holding up in 2015. 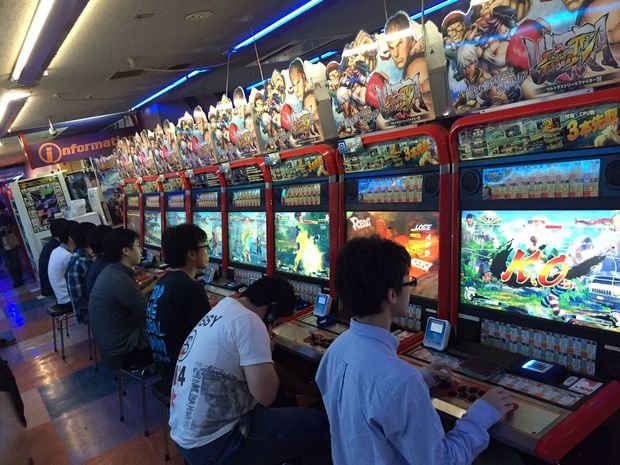 At the suggestion of a few locals, I decided to give the “Try Arcade” and “Hey Arcade” a go (among others), which are two of the biggest arcade locations in Akihabara — though everywhere from Shibuya to Shinjuku has their own arcades. Although I’ve been told that arcade attendance has been hurting somewhat in the past five years due to the rising popularity of consoles and mobile gaming, there’s plenty of Japanese residents frequenting arcades, to the point where you’ll never be wanting for a challenger or playmate.

Of particular note is that the popularity of fighting games has seemingly never dropped. From the old school Street Fighter II Turbo machines all the way up to recent iterations, plenty of fans are lining up to get a chance to play them against a worthy foe. Out of every series there, the two most popular I noticed were Ultra Street Fighter IV and Guilty Gear Xrd Revelator, which had completely full cabinets and lines behind them. In Japan players don’t really “coin up” with putting a credit on the cabinet, so you kind of just wait your turn and try to get in when you can.

But tried and true fighters aren’t the only thing on offer — I was completely taken aback by how much variety each arcade contained in general. They had everything from rooms full of rhythm games, to racers, to UFO catchers, to card games, to units that used touch interfaces or had full-on mouse support. One of my favorite experiences was a huge room full of Gundam cabinets, which allowed players to face off on two teams with Zakus or Gundams respectively, controlling their avatar like a real mobile suit complete with a pod seat, pedals, and two joysticks. Hell, one place I went to had a urinal video game in the bathroom.

Out of everything on offer however, the most poignant sections for me had to be the retro floors. One particular aspect that we aren’t talking about nearly enough in the gaming arena is preservation. Thousands of arcade units every day are slowly withering away, and once they’re gone, they’re gone. Thankfully, publishers tend to reintroduce their older games to a new generation by way of marketplaces like the PSN and eShop, but so many titles have fallen by the wayside, or worse, in landfills.

Japanese arcades do their part in preserving the past, whether it’s by way of taking care of the original cabinets or keeping games alive with other methods like the Nintendo VS. System. I was able to relive some of the first memories I’ve ever had with gaming, and even play something that I’ve always wanted to all my life, but never had the chance to — the original Goonies game, which never came out in the West on a console. Goonies II (which I did own), came out on the NES, oddly enough. Also, playing DoDonPachi and other Cave shooters in their original arcade form was magical.

Pretty much everything you could want is housed in Japanese arcades, so if you happen to make the visit out, I highly recommend checking them out. Whether you’re a hardcore fighting game fan or want to try something new, it’s worth the trip.