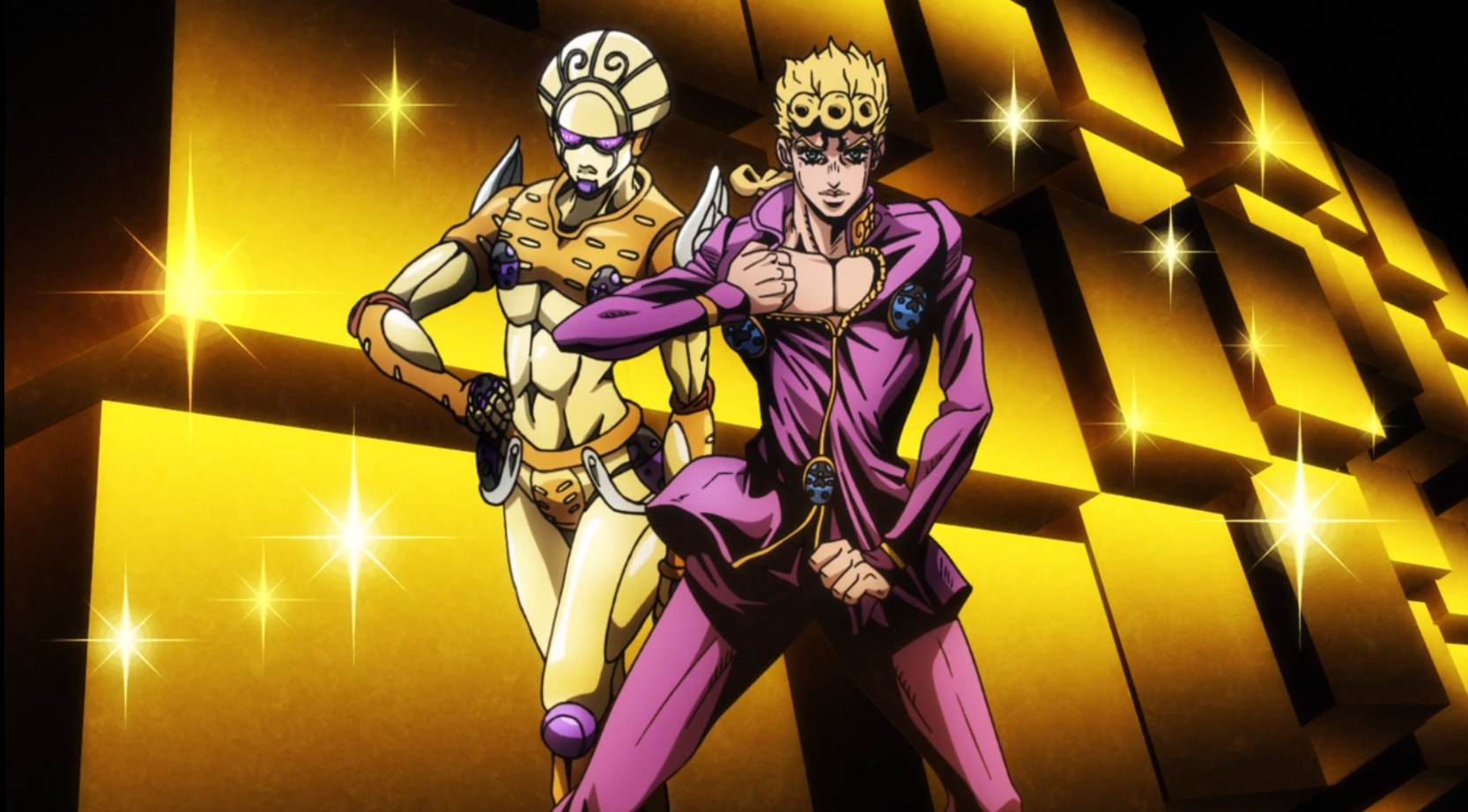 Halloween might have already passed, but for those who practice it, celebrating the dead isn’t over yet! And like the spirits of those passed, Japanator’s Binge Log has risen again from the ashes of summer to talk about – what else – the new Fall 2018 anime season!

But we’re leaning into the frightful spirit of the moment by bringing you the scariest thing of all: Change! As might be gleaned from the title, we’re breaking up our season “preview” into more of a set of impressions of the shows we’re watching. Rather than a wide-ranging roundup of a ton of anime we might not even bother to see the first episode of, the Binge Log will, moving forward, function as more a snapshot of what we think of a show at the time of writing. That means you can expect more relevant, timely, and hopefully frequent installments, unbound by seasonal rhythm, Netflix or Amazon license-hoarding, or common sense and decency!

Today’s subject is the long-awaited debut of JoJo’s Bizarre Adventure Part V: Golden Wind! We’ll be telling you what we think of the show below, but feel free to sound off in the comments, or suggest the next Binge Log subject!

David Studio returns to JoJo’s Bizarre Adventure adaptations with the fifth part of the saga of Stand Power and sexy posing, Golden Wind (also known as Vento Aureo), this time starring Giorno Giovanna (“GioGio” to his friends), an Italian tough looking to rise up in the ranks of Naples’ underworld. 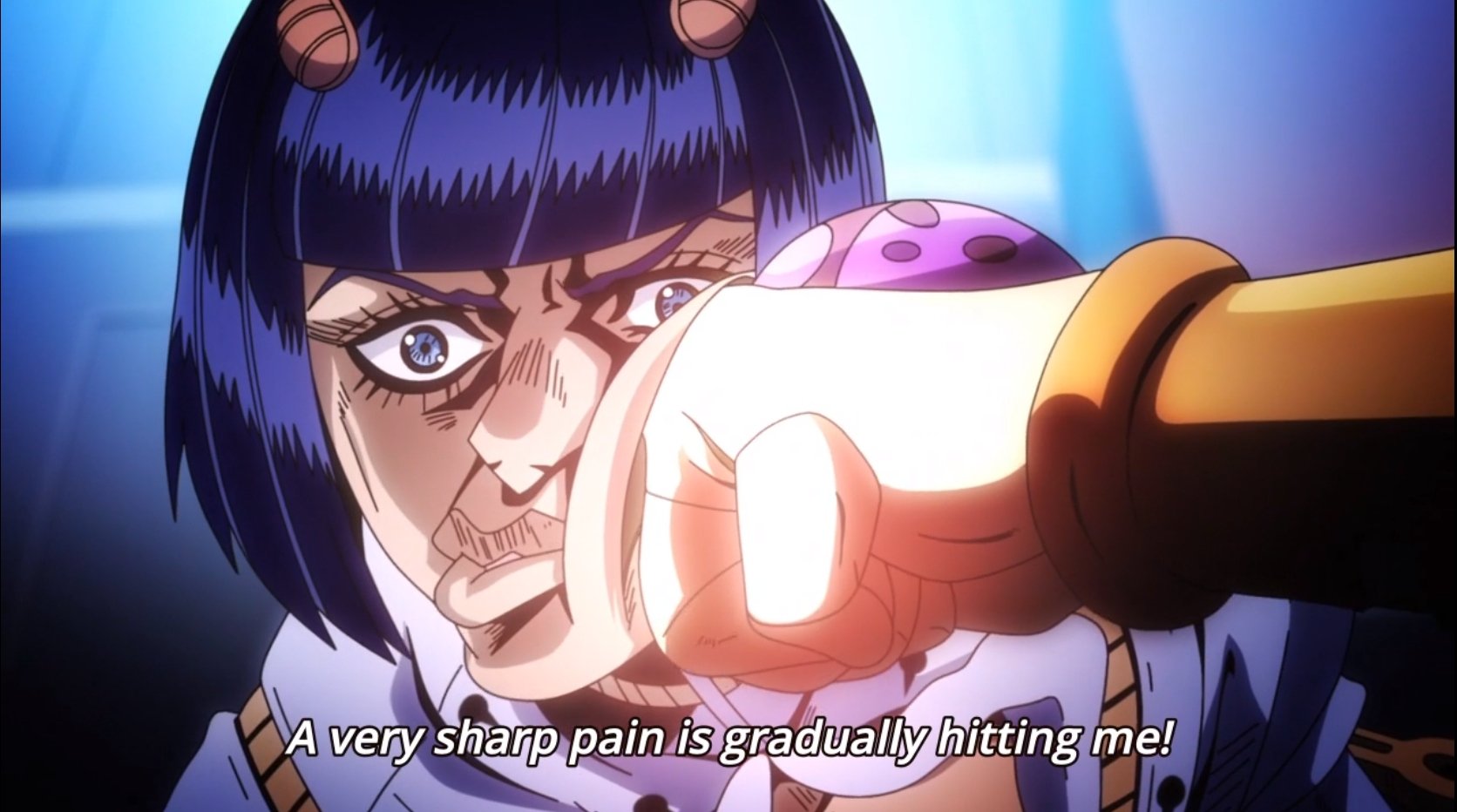 I’ll admit it right now: I haven’t finished watching Part 4 yet. Life and whatnot happened, and I basically ended up checking out of the show relatively early on. As such, any real comparisons between Diamond is Unbreakable  and Golden Wind would be meaningless coming from me. For what it’s worth, though, Golden Wind does start off strong.

The arc’s new JoJo is actually the son of Dio Brando, making him a cousin to Jotaro and Josuke by dint of the weird circumstances of Dio’s return in part 3, and thus an inheritor to his own Stand power, “Gold Experience”, which can give life to inanimate objects and induce weird hallucinations in the already-alive. Gold Experience shows Part 5’s willingness to experiment with increasingly elaborate Stands, continuing Part 4’s trend away from the mundanities of regular ol’ battle. Much as I enjoyed Part 3, the clashes of crazy rules that govern the different Stands makes for a more interesting fight, in my book.

That much is shown in JoJo’s first fight, with a rival gangster named Bruno Bucciaratti, whose Stand, “Sticky Fingers”, can open zipper-like portals in anything it touches. Things get, well, bizarre right quick, with Bruno able to pull gross stunts like teleporting a dead mobster’s fingers right into JoJo’s damn mouth. JoJo holds his own, though, and before long his character and ambition convince Bruno to act as his mediator, introducing him to the gang, “Passione”, and its capo and gatekeeper, Polpo. 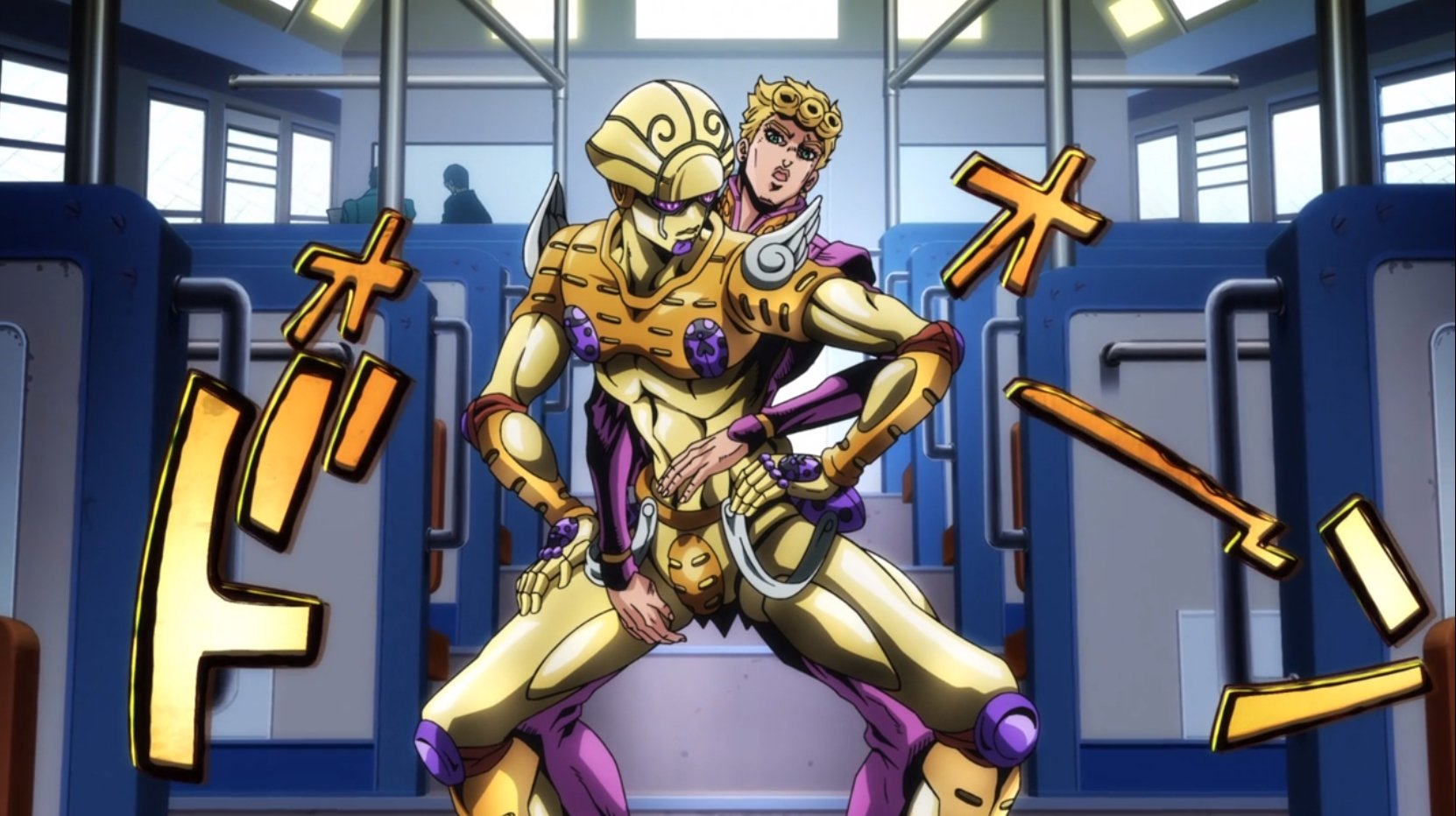 The fight with Polpo’s Stand “Black Sabbath” is also a pretty good one, but its aftermath is what helps set Giorno as Part 5’s JoJo apart from the others. Whereas Jonathan, Joseph, Jotaro, and Josuke might hesitate to kill or otherwise might prefer some more poetic form of justice for their enemies, Giorno, hardened by his early life, is more biblical, managing to use his Stand to, essentially, induce a murder-cum-suicide.

If things keep up this way (I wouldn’t know if they do, as I haven’t read the manga), Golden Wind will be one to watch, even if the Crunchyroll subtitles’ copyright-friendly renaming of Stands and characters feels a bit unnecessary. 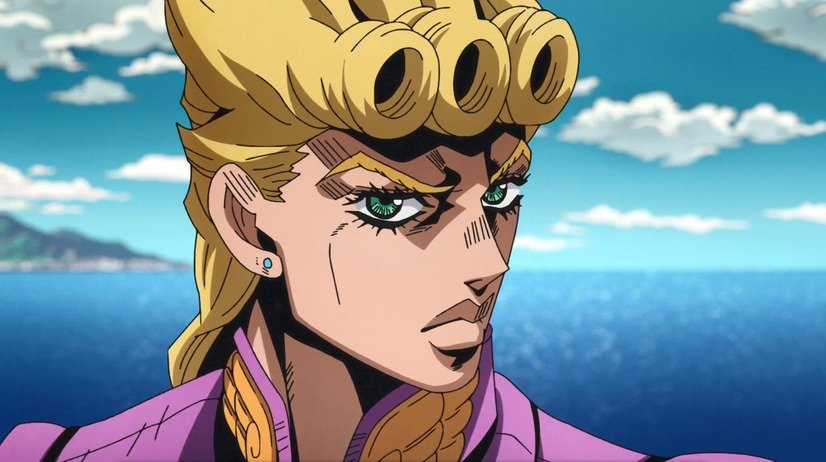 I’ve been looking forward to Golden Wind for a long time due to the fact that it just continues the slippery slope Jojo takes since Diamond is Unbreakable. Surprised at Josuke’s fancy outfit and body type? Well Giorno is even thinner and has a chest window! Did you love the crazy globe trotting antics and the Twin Peaks vibe of Morioh? Let’s go to Italy and deal with the mafia!

It’s been a hot minute since I last watched Diamond Is Unbreakable, so getting back into the groove of these crazy Jojo antics was a lot of fun. There’s never any long moments of charging or inexplicable downtime. When it comes to fight scenes, there’s always either a punch being thrown, or a character quickly narrating what’s bizarre things are happening in their mind. Like the moment after Bruno gets hits by Gold Experience, he quickly goes from “What’s going?” to “You fool! I’m stronger now!” to “Oh no! My senses are faster than my body!” in the span of just a minute. Any lesser battle manga might take a whole episode explain these little intricacies, especially since Jojo is all about weird powers, the rules that govern them, and getting around them.

Diamond Is Unbreakable has also always been about leveraging its bizarre setting to create colorful backgrounds that are weird in context but totally appropriate given the circumstances to show how weird everything was. Maybe Golden Wind won’t have purple trees or green skies except maybe the shocked reaction pieces, but color is still popping considering the main characters are Italian mobsters who loves extravagant suits with crazy colors, operating out of Naples, Italy. And speaking of extravagance, Fighting Gold has made the hubub for fans for the past few days,arguing whether it was good or simply the weakest OP in the series, though I don’t think anyone’s gone quite as far to they hate it. But leave it to Coda to make something that’s still catchy, regardless of how you feel of the song in its entirety. I still find myself shouting out “fighting gold!” whenever that comes up on the song. 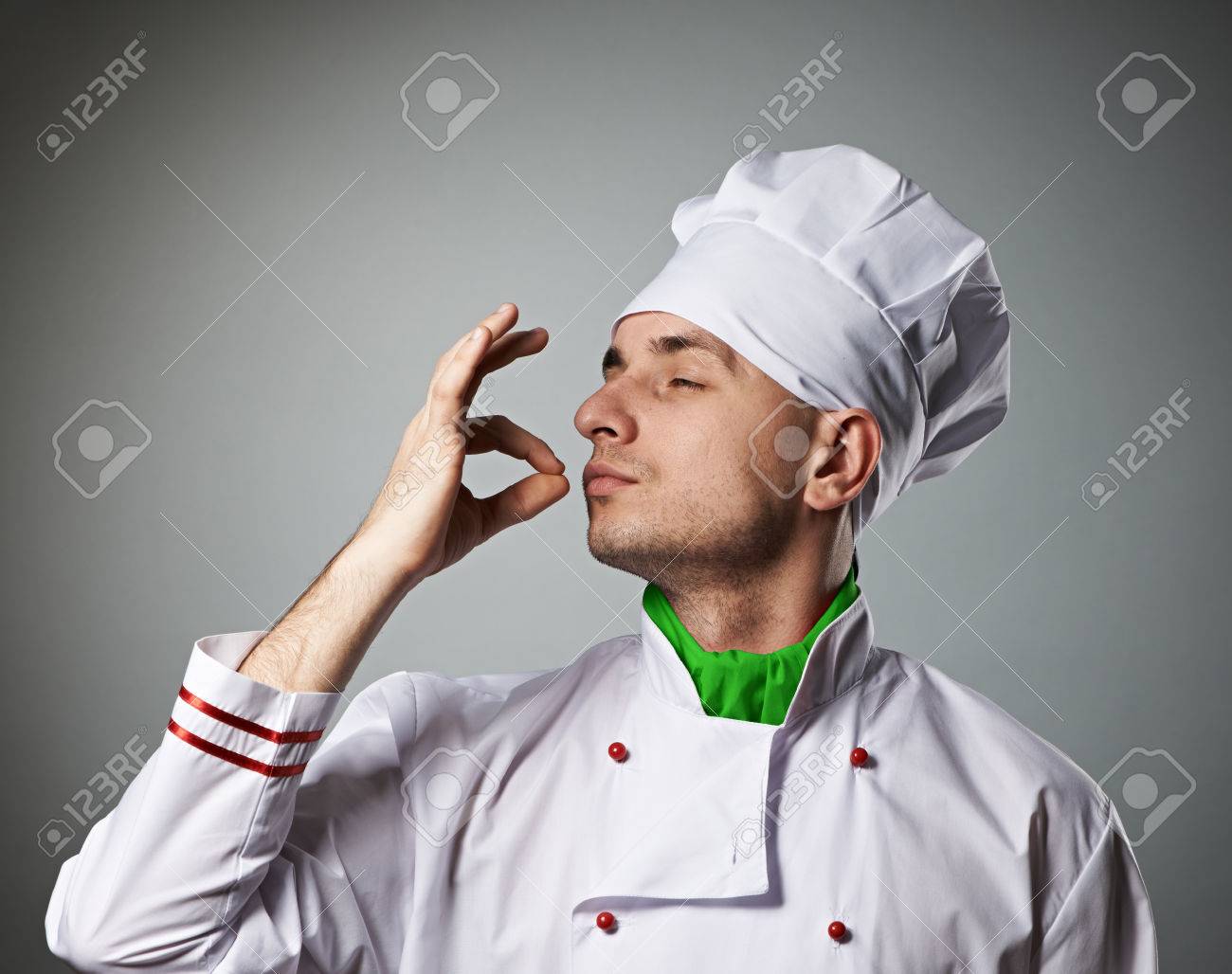 But the ED? It’s as good as it gets compared to “Gangster’s Paradise”.