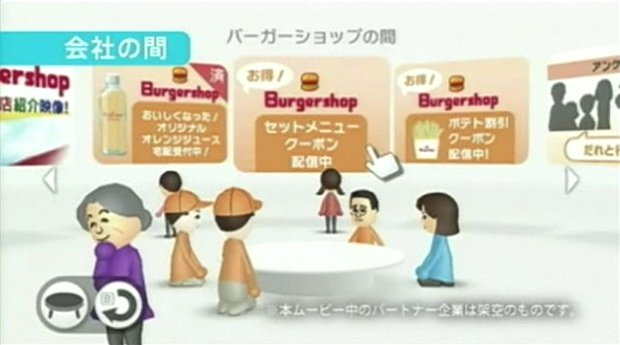 We’ve heard bits and pieces about a Nintendo Wii video service, but we had no idea it would include connectivity for the DSi…and really strange features like video coupons.

On the official Japanese Wii page, you can check out the first details of Wii no Ma, their video service set to launch for the console on May 1st. Free and paid content can be viewed in a new Wii Channel, a in-television television room. How meta. Eight of the on-system Miis can gather at a low table and sit awkwardly as a strange hand floats around their living room as you click on things around the room that represent content and features you can access. Or click the television and get to watching.

In the first video below the jump, you’ll see even more strange stuff. Crazy video clips as examples. An all gray Concierge Mii. Home delivery of a bottle of orange juice. Wait, what?

Connectivity is a feature they’re heavily promoting. Videos can be beamed to other Wii consoles, or even to your shiny new DSi, via the Dokodemo Wii no Ma DSiWare app, set to launch on the same day. Aside from making your video content portable, the videos show an example of being able to download a video coupon to your DSi and redeem it by playing the clip at a fast food joint.