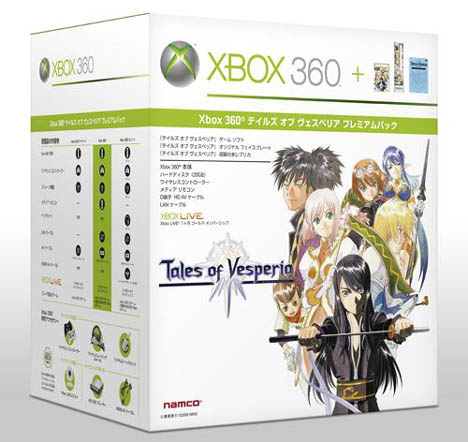 I’ve been that shade of Xbox 360 green with envy for awhile now after seeing the first details on Tales of Vesperia. That’s mostly because I love the Tales series, and my Xbox 360 is needing a bit more RPG lovin’. Now I’m a bit more envious with the announcement of a new Xbox 360 bundle for Vesperia.

Those crazy kids at Kotaku found some details on the new bundle, which was just announced at the Xbox 360 RPG Premiere 2008. This lovely bundle comes with Tales of Vesperia, a Tales faceplate, a copy of the game’s script(?) and a 20GB 360. This hits Japanese shelves on August 20th for 37,800 yen ($353), according to Famitsu. I stole all the screenshots from there and attached them below.

I would like to own this game, in English. Preferably this year, during the summer games drought. Please include the faceplate as a preorder bonus. I don’t need the script, as I’ll actually be playing the game.