Jamestown was a wonderful shoot-em-up back when it first released on PC. With bullets blazing across the surface of a colonial Mars, it paired beautiful sprite art with epic music and cooperative local multiplayer to make something really special.

With the release of Jamestown+ on PlayStation 4, it’s larger than ever. 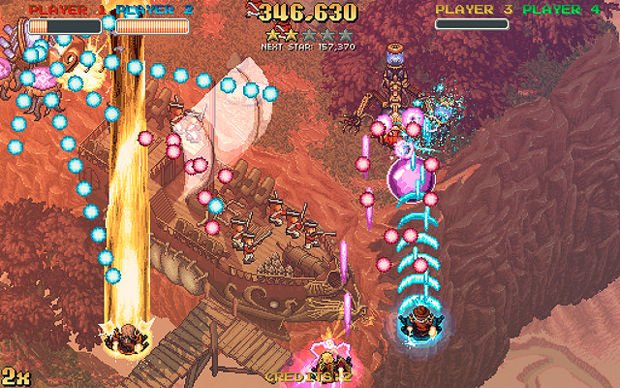 Jamestown+ introduces four new craft to pilot, doubling the number found in the PC release. These ships are not wholly original, with special weapons that resemble those of the base set but function in slightly different ways. Crystal and Charge, for example, both fire a slow-moving projectile across the playfield. Where Charge can fire without fully charging, Crystal projectiles have a longer reload time but can be redirected mid-flight.

The new ships also have access to a variety of basic shot configurations, unlocked from the in-game shop. This allows players to further customize their ships with spread or multidirectional fire to complement their special weapon selection and opens up a lot of options.

Two additional stages have also been added in the new edition, set on the moons of Mars, Deimos and Phobos. These bonus levels tell a side story from the charming rogue John Smith, with Smith escaping a Spanish prison on Deimos and discovering a pirate stronghold guarded by giant enemy crabs on Phobos. They are as well crafted as any original Jamestown stage, populated by unique enemy types and massive bosses, and make fine additions. The new levels also extend the original game’s “Gauntlet Mode” (in which all stages are played back-to-back with limited credits) with a new “Super Gauntlet” mode including Deimos and Phobos in the run.

It’s also worth noting that the Jamestown experience on PS4 is made ever so much better by controller uniformity on the platform. As much fun as Jamestown could be in local co-op play on PC, you had to actually get it set up first, which could be a real pain in the ass between controllers, mice, and keyboard options. With the PS4 release, you just turn on your controller and hold a button to jump in, easy peasy.

If you have yet to experience Jamestown, the new release on PS4 is the way to go, as it gives the most bang for the buck and plays just as well. Even if you’re an old hand at it, the new ships bring a fresh variety to the game and do require some new skills despite their similarity to prior vessels, while the bonus stages offer a fun new challenge.