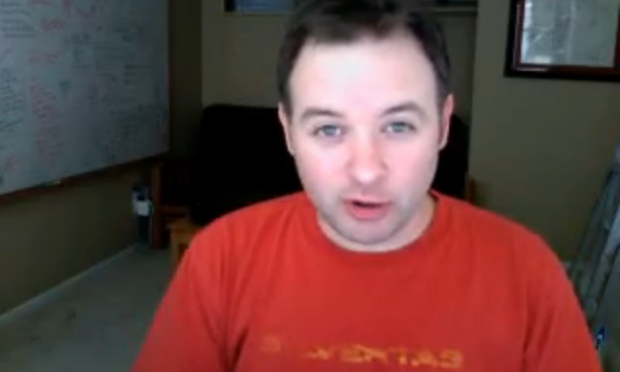 It’s a surprising thing to post a ranting video one morning and then find your inbox flooded with emails (in this case, six emails constitutes a “flood”) a few hours later. It’s even more surprising to find that several of those emails link to a video rebuttal of your aforementioned rant. It is still more surprising when one realizes that the rebuttal in question was made by David Jaffe, the man behind Twisted Metal, God of War, and Calling All Cars!

As an experiment in what our founder calls “realtime interactive Internets,” you can watch David Jaffe’s rebuttal to my most recent Rev Rant after the jump, as well as a text-only rebuttal to his rebuttal. A rebuttal squared.

If you’re interested, hit the jump to watch the director of one of the most profitable Sony franchises in history tell me to shut the f*ck up.

Here is the weird thing about Jaffe’s rant, in relation to mine: we both seem to agree with everything I said. The stuff Jaffe seems to disagree with…well, it’s stuff I don’t recall ranting about.

My argument was, and remains, that games should be more than just mindless fun, that the medium needs to expand in order to be taken seriously, and that those people who want games to just be fun are cowards who are stifling the inherent expressiveness of games as an art form.

Jaffe’s, at least as posited in this video, seems to be that the reason we don’t see these games comes not from some mixture of greed and/or laziness on the part of big publishers, but from the fact that game designers have absolutely no idea how to speak to the human condition through their medium of choice. People should stop preaching for the evolution of games as art, and just start doing it (or, alternately, shut the fuck up about it).

In other words, we’re arguing two completely different things. Still — that’s no reason not to continue the discussion, right?

If the argument is that big companies like Sony simply haven’t seen anything artistically feasible that they’d get behind, then sure — that’s fair. I haven’t been privy to as many design meetings or industry shenanigans as Jaffe is, and I’m more than willing to accept the fact that a lot of people just don’t know how to speak to the human condition through button presses.

But that nobody knows how to do it? That nobody could turn something like Passage into a longer, $60, “real” game?

If five-minute artgames can speak to the human condition through gameplay alone — and I’d argue that they can — then a hefty amount of the theoretical work is already done. Games like Today I Die and Passage prove that interactivity on its basest levels can evoke an emotional or intellectual reaction unlike any found in other, established artforms. If you can get a button press to make players cry in five minutes, you can make it do the same thing over a period of hours — it’s just much, much harder. At which point, “we don’t know how to do it” seems less like irrefutable fact and more like an excuse.

I don’t know how to speak Spanish, for instance, but I’ll never be able to do so if I don’t try and fail to pronounce “sacapuntas” hundreds and hundreds of times. The “shut up about it until you can do it” mantra seems irrelevant at best — is all videogame critique of any sort just supposed to cease until someone makes an unerringly artful game? — and regressive at worst.

Jaffe says nobody knows how to do it correctly. I’d point to, just as a start, games like Braid, Silent Hill 2, Ico, Shadow of the Colossus — hell, even parts of not-great games like Fable II can speak to the human condition. If these games prove that it can be done, even if only occasionally, then what excuses does the industry have as a whole for not pursuing those goals further if not purely pragmatic ones?

As someone who tried to make a big-budget artgame and failed to do so, Jaffe presumes I’m (to briefly quote his Twitter) a poser who bitches without actually doing anything about the state of the industry. Even if I hadn’t made an artgame of questionable quality in an attempt to explore the very things I rant about in this video, however, I’d still take issue with the idea that gamers shouldn’t be asking for more from their media with every breath in their bodies. It’s possible and it’s insanely difficult, but it’s what the medium — and gamers as fans of that medium — ultimately deserve.