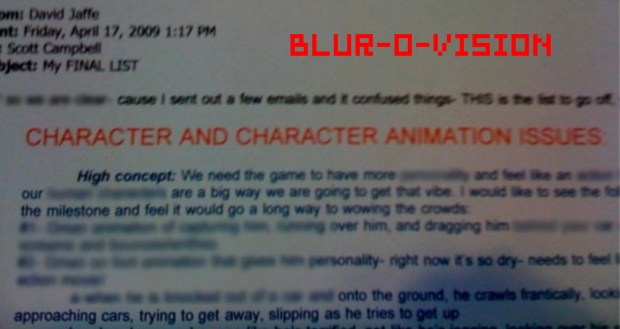 The point of posting clandestine information on the internet with the parts you don’t want people to read is lost on me entirely. When you post something like that, as David Jaffe did on his blog, you’re basically asking for someone to figure out what you’re trying to hide. After an enterprising internet user did some photoshopping and unblurred the words that Jaffe had covered up in an email correspondence he posted on his blog, Jaffe then went ahead and covered the words in red, and then took the whole thing down because he realized it was pointless to put up in the first place and was only asking for trouble.

However, trouble had already found Mr. Jaffe as the world now knows that his next game will have cars… and humans… and they may, you know, go together. The unblurred email revealed Jaffe discussing such things as “dragging him behind your car” and “when he is launched out of a car.” Who is getting launched out of what? Why “human characters” of course, and they need some work because “right now it’s so dry, it needs to feel like an action movie.”

Could this be a sign that the new Twisted Metal is heading our way soon? It’s tough to say. The series has never really human heavy, and making it like an action movie sounds cool, but also doesn’t seem to quite fit with the Twisted Metal universe. What then could it be? According to the email we may be finding out at E3, as it states that an important milestone is coming up.