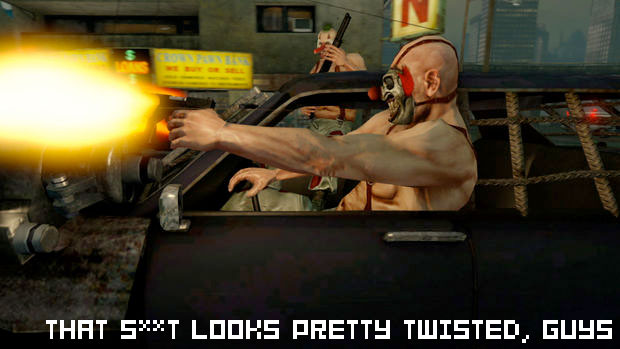 Fans of Twisted Metal: Black might have been put off a bit upon hearing that Eat Sleep Play were aiming for a ‘T’ rating with its upcoming PlayStation 3 Twisted Metal game. The studio’s co-founder David Jaffe later turned to Twitter to explain, saying the reasoning behind it was broadening the audience. He even revealed that Twisted Metal: Black, the only M-rated title in the franchise, was the “best reviewed but worst selling” game in the series.

During a behind-closed-doors demo at E3, Jaffe took a moment to explain what the Teen rating means for the game’s tone.

“The way I’ve been thinking about it, and this comes through especially in the weapons and the stories, it’s kind of like anything that can air at like 8 or 9 o’clock television is okay for us,” he explains. “We’re shooting for an edgy Twilight Zone vibe versus the dark depression that we did in Black. It’s not as light and frothy as [Twisted Metal 2]; that was very cartoon-y and comic book-y. Somewhere in the middle.”

Black featured an incredibly dark tone and vibe, including disturbing (and sometimes gruesome) storylines. But the ‘T’ rating doesn’t mean that Twisted Metal on the PlayStation 3 won’t feature serial killers.