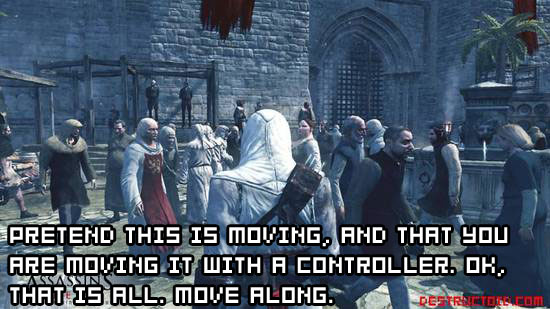 A few of us here at Destructoid have had a chance to play Assassin’s Creed, and our feelings are quite mixed. I can’t speak for anyone else here, but I found the game to be a delightful little experience, with a minimal control scheme that let me perform some slick moves with little effort. It’s too bad you’ll just have to take my word for it.

In an interview with Gametrailers, the game’s producer Jade Raymond was pretty clear: There will be no Assassin’s Creed demo.

“This game is more like a sandbox style game,” Jade tells Gametrailers, “where there’s a lot of things, so it’s not a linear mission where you can say OK, we’re making a demo and we’re giving you this mission.”

“There’s no way to really make a demo,” she says as she digs herself into a hole, “and I think that’s the same reason games like GTA don’t have a demo.”

Ah-hah — we got you! Grand Theft Auto clone-extraordinaire Saint’s Row had a very serviceable demo, Jade! What say you to that, lady? Wait … where are you going? Come back! I was just kidding …