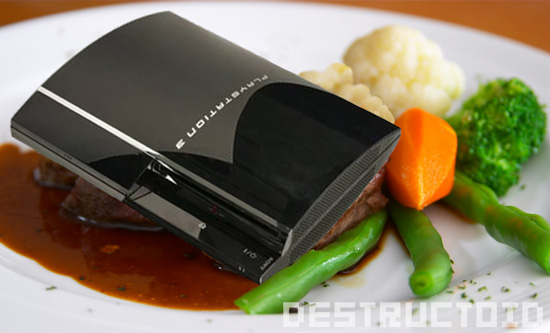 At this year’s E3, Vicious Sid over at Gamepro spoke with Sony’s Jack Tretton about the PS3 and its future. When asked to equate each of the three major consoles to a meal, Tretton had this to say:

“I think the PS3 is the Surf ‘n Turf. You want the lobster and steak and you’re going to give yourself the treat of getting the best thing on the menu. The PS2 is your favorite burger restaurant — you go there for comfort food and it’s just always good and is a good value.”

“[As for the other two consoles], one [Wii] is a lollipop, and I’m too old for lollipops. The other one [Xbox 360] I get sick from once in a while because the cook isn’t always reliable.”

Mr. Tretton seems to forget that gamers are, by and large, a pretty frugal bunch. We’re not exactly the type to jump at the chance to spend huge sums of money on a meal that will be gone in 20 minutes; especially when it’s coming from a chef that’s notorious for screwing around with menu prices and then serving the main course without any salad or breadsticks. Steak and skrimpz are yummy in their own right, but more often than not, there’s nothing like a Blow Pop and a Cheeseburger to quiet a rumbly belly.

[Mad props to Funkmaster Fitches for the tip]