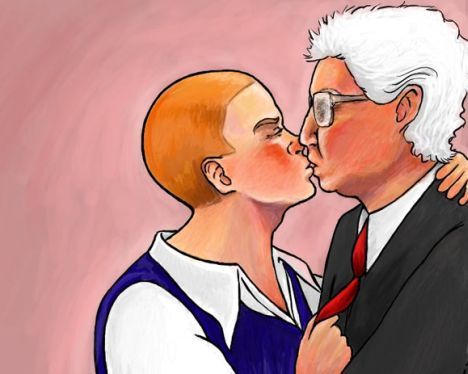 David and Goliath. He-Man and Skeletor. Jack Thompson and Take Two. These famous rivalries have entertained us, thrilled us, and, in the case of the last one, infuriated us to no end.

The infuriating thing about Jack Thompson’s constant lawsuits toward Take Two (producers of Grand Theft Auto and Bully) was that, for all his misplaced rage and failed attempts to block distribution of harmless entertainment, Take Two never fought back. Take Two defended themselves, and remained dignified — as dignified as a company can be, when that company manufactures entertainment where one can pay a hooker for sex and then run her over with a scooter.

Update: Now with Jack’s response to the lawsuit!

Yes, after Jack’s failed attempts to restrict distribution of Bully and his promise to follow suit when Take Two releases Manhunt 2 and GTA IV later in the year, Take Two has decided to file a federal court case against Mr. Thompson. They claim that Thompson has flagrantly abused Florida’s “nuisance” law in his single-minded crusade to ban violent video games. Take Two’s official complaint states that Thompson’s penchant for bringing up threats and lawsuits before retracting and dismissing is irritating: that his lawsuits come at “unpredictable times and under unpredictable circumstances,” in addition to harming retailers who do business with Take Two.

Take Two also complains that Thompson’s lawsuits represent an infringement of their first amendment rights, which may or may not be the very first thing every gamer in the world thought the moment we first heard about Thompson’s war on gaming. Well, maybe the second thing we thought. The first thing was likely something along the lines of, “What a doucheface.”

This is awesome, in so many indescribable ways. Destructoid’s first birthday, Niero’s 29th, and the filing of a lawsuit against Jack Thompson happened within three days of one another? Without a doubt, this has been one of the best single weekends in video game history.

Mxyzptlk was kind enough to provide a link to Jack’s insanely religious response to the lawsuit. It’s worth reading in full, but suffice it to say that he quotes Psalm 35 (which he describes as brilliant, “since God Himself wrote it”) and ends his letter by saying “Praise be to God Almighty.”

I’ll be the first to say that Jack Thompson seems like a somewhat reasonable guy in person, but he sure knows how to be creepy as fuck in print.