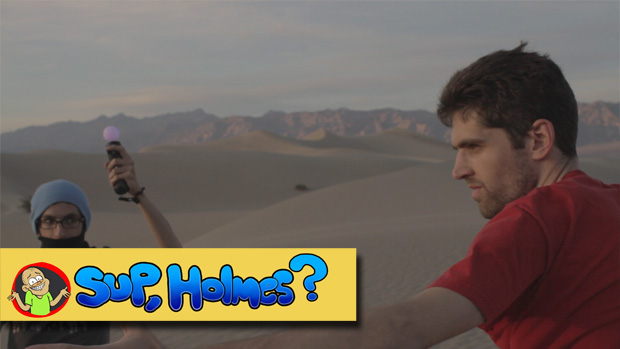 Last week’s Sup Holmes (now on iTunes) was a real instant friendship time. Douglas Wilson is probably the most down-to-earth, PhD-educated videogame developer I’ve met all year. There was no subject he wasn’t willing to roll with, from the history of games (video and otherwise) as an art form, to the consistent failure of most large developers to understand the slapstick appeal of motion-controlled games, to the many, many failed prototypes he put forward in the process of creating Johann Sebastian Joust.

The fact that Sony, Nintendo, or Microsoft have not yet snatched up Mr. Wilson’s considerable talents for an exclusive, multi-player motion controlled experience is mind boggling. Sadly, it seems that the same thinking that keeps developers making misguided Kinect/PS Move/Wii remote games also keeps publishers from backing developers who understand how to make the most of motion controls.

With some luck (and the help of people like you), Mr. Wilson might not need the help of the big names. The Sportsfriends Kickstarter is a little over half way to being funded. With only a few days to go on the project, it’s going to be close. If you don’t pitch in to this thing, you no longer have the right to complain about motion-controlled games feeling uninspired and  unexciting. You’ll only have yourself to blame.