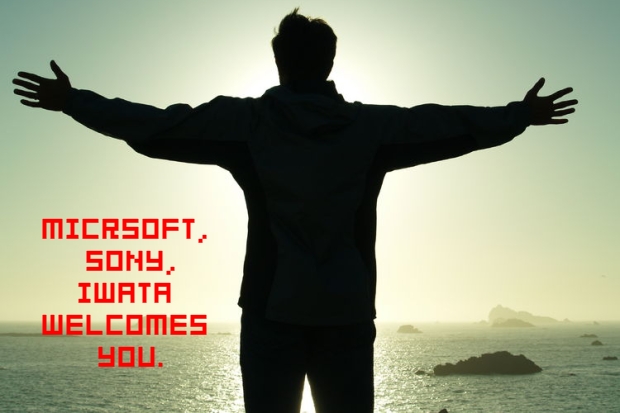 Let me wave my fingers in front of the screen Wayne’s World style and take you back in time. Now that we’re here Nintendo has just launched the Wii and it’s taking off like Superman about to rewind time by switching the direction the earth rotates. OK, wiggley fingers again and we’re back in modern times. There should be motion controls everywhere, right? Microsoft and Sony should have been on that trend like white on rice, but that isn’t the case. In fact both companies have just announced their motion controls now. Anyone surprised it took so long? Iwata is.

While discussing the Wii’s amazing success and general awesomeness, Iwata talked about the competition’s new motion controlling “controllers.” “To tell the truth, I expected them to come up with stuff like this last year. So in my mind they’re later than expected,” said Iwata.

He then paused and opened his arms outstretched, with a grin on his face. “I’d like to say to them, ‘Welcome to the motion-control world!’ We are happy that it is now becoming an industry standard. However, we still have no idea about when their products will be available, or how much they will cost, or what sort of software they will be used

“So, I am not in a position to judge whether they are a threat or not. And they should bear in mind that over the next year Nintendo will not be standing still. We’re always at work on something new. I am actually looking forward to engaging in that sort of competition, because it gives our whole industry the chance to expand the gaming population.”
Sorry, long quote is long, but the entire thing is pretty interesting so it’s all here. Hopefully he is right about the entire industry expanding, and hopefully it expands in every direction not just casual.