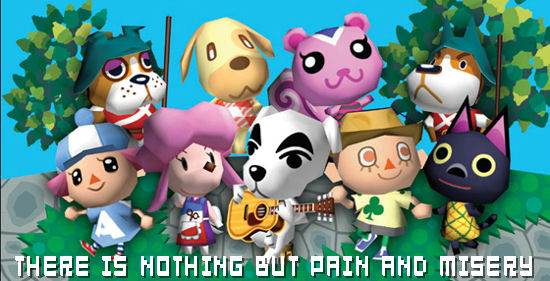 Well if this isn’t a kick in the teeth. The prospect of an Animal Crossing MMO on the Wii sounded absolutely delightful, and offered real potential for Nintendo to make a serious step forward in the online gaming market. Well, we can all pack up our hopes and go home, because Nintendo president Satoru Iwata has put paid to the dream. Now it’s a case of Animal Crossing MM-NO.

“The virtual-world services out there now still aren’t at a place where we’d like to join in,” Iwata claimed, possibly while poisoning a well and curbstomping a puppy.  “And certainly not to the point that we’d want to jump into competition with everybody else. We’d rather focus on doing things that nobody else would do.” Gee, why don’t you go break a kitten’s back legs while you’re at it, killjoy?

Seriously though, this is sad news, but if Nintendo doesn’t want to make a potentially awesome title, then so be it. Iwata would rather make balance boards, as he states that “nobody else wants to develop a videogame where you get on the scale and see how much you weigh.” Yes … that sounds so much better than an Animal Crossing virtual world … it really does. Can’t wait for a “brushing your teeth,” sim, either.

Perhaps we’ll see it one day, but for now, Nintendo’s focus is clear, and it’s not interested in pursuing this venture. Here’s hoping the Wii’s online network can at least support Super Smash Bros. when it arrives, at least. Something worries me about that.