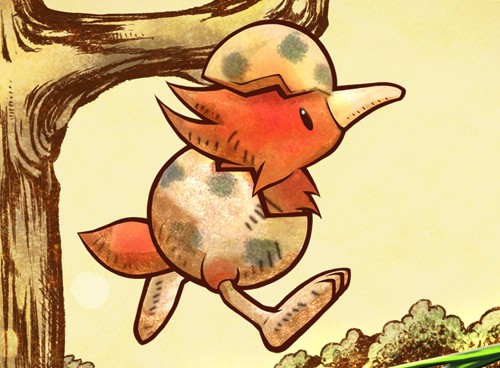 Ivy the Kiwi? is the latest game from ex-Sonic Team head Yuji Naka. The game’s being published by the small-but-scrappy publisher XSEED games, and as such, it can only be found in small numbers at specialty stores like Gamestop. That’s a God damn shame. With a big money add campaign (and a XBLA/PSN release) Ivy the Kiwi? could have made it big. Hopefully, it still will.

The game is so much better than it looks, which is a reoccurring theme with Yuji Naka games. It ranks right up there with Sonic and NiGHTS at providing a deceptively simple hook that if properly utilized, can lead to a massively deep gameplay experience. Just as Sonic’s speed and NiGHTS’s aerial somersaults could be used in crude or complex ways to meet a challenge, Ivy’s vines have a level of versatility that isn’t immediately apparent. Ivy the Kiwi? is one of those games where even if you beat a level, you’ll want to play it over again immediately, to try and beat it better.

Want the game? We’re running a contest for it right now, but you could also pick it up for $20 on the DS, or $30 on the Wii. In Japan, it’s also available on Windows Mobile, and there’s a chance it will come to WiiWare and DSiWare as well. In the immortal words of the smartest doctor ever, “Check it out!”