And a whole lot quicker

Ubisoft finally had all the perils that come with annual franchise installments come crashing down on it last year with Assassin’s Creed Unity. It was the most ambitious Assassin’s Creed title to date — with its insanely nuanced world and impossibly thick crowds — and that may have been its undoing. Stray too far from the formula and that’s when mistakes are bound to happen.

So, while Unity had some of the better assassination missions and world design in series history, it was mostly for naught as everyone focused their attention of technical shortcomings. It’s a reasonable stance to take and Ubisoft seemingly knew it. With Syndicate, it’ll strive to put Assassin’s Creed back in the spotlight, not a litany of bugs and glitches. 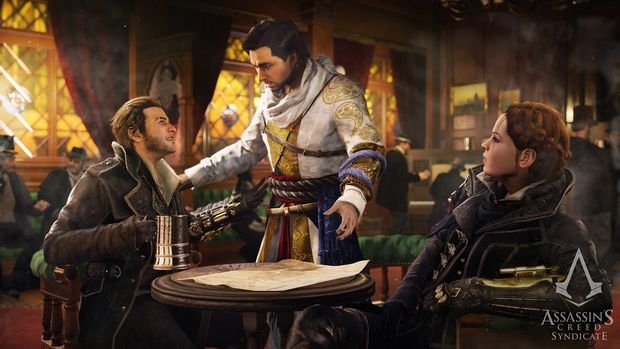 As these things go, our E3 demo was free of any sort of missteps that would hint at a repeat performance. No surprise there; these showings are almost always incredibly polished even though they’re all in “pre-alpha.” What is worth noting is that Ubisoft actually let us have hands-on time this year. In 2014, it was a one-on-one hands-off session while a developer played. That could be a small indicator that the publisher has more faith in this year’s iteration.

I was turned loose in a very small section of London, and I immediately felt a knowing comfort. Assassin’s Creed isn’t going to change that much, after all. Having just walked out of a pub, protagonist Jacob was on the ground and surrounded by three story (or so) buildings. Rooftops are the much preferred method of getting around, so it’s time to start ascending.

This is where Syndicate made its open-world pacing apparent. Rather than climbing the face of every structure, Jacob can shoot a grappling hook that will almost instantaneously transport him to any summit. It may seem like it wouldn’t be all that noteworthy, as several titles have implemented the same feature in recent years. But, it does such a great job of opening up the Assassin’s Creed traversal, it’s impossible to ignore its significance here.

Once on the rooftops, it was simple to shoot ziplines across to even further destinations. It’s no longer necessary to go from roof to ground and back up when trying to cross a city. Now, pathfinding is incredibly simple because it just requires a quick tap of a button to fire across the chasm.

These ziplines serve another purpose too, though. Partway between two points, Jacob can decide that whatever’s underneath him needs a quick blade in the back of the neck. Performing air assassinations while gliding along proves to be quite satisfying, not to mention efficient.

This particular demo tasked me with clearing out a relatively small compound, which was a great opportunity to test out the only new weapon I was shown. Jacob has hallucinogenic darts at his disposal, which make enemies easy to deal with. What’s more, shooting them into a fire gives them an area-of-effect radius instead of only harming one target. I took out three people with one dart and then threw a knife to drop some cargo on the head of a fourth. It was a pretty great way to quickly and creatively dispatch a handful of enemies. 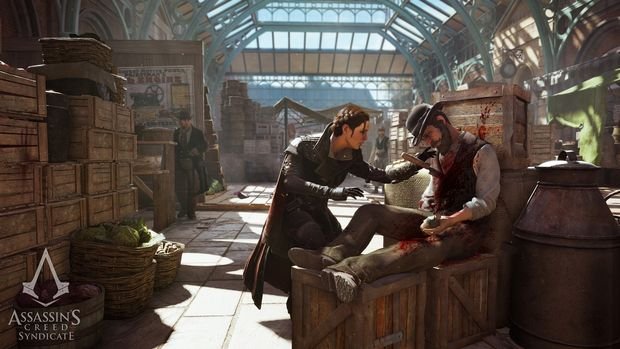 That’s when the faction leader began fleeing, necessitating commandeering someone’s buggy to chase them down. With a terrified horse pulling me around with all the grace you’d expect from a panicked animal, I eventually caught up. This initiated a “gang war” where I fought alongside approximately ten others to kill those on the other side, which concluded the demo.

For the few takeaways I had, I was left with more questions. What role would Evie play opposite of Jacob? Will either be playable under any circumstance, or do they each have scenes dedicated to them? How will gameplay differ between the two? What are Ubisoft’s plans for the modern story? How will the boroughs of London seem unique? I had a lot of inquiries, but the developers were tight-lipped about almost everything, simply stating that oft-repeated line “We’re going to be talking about that later.”

Frustrating as it is, it’s par for the course. Information’s always locked down until the publisher’s ready to reveal. From what we saw, everything about Syndicate is very Assassin’s Creed. That’s not much of a revelatory statement, but it is what it is. The grappling hook — the one thing that isn’t very Assassin’s Creed — was undoubtedly the finest feature. It’s not the type of change that will be at the forefront of someone’s mind when they think about the game, but it’s an improvement that will keep traversal from becoming too much of a slog. That’s a welcome addition if I’ve ever heard of one.