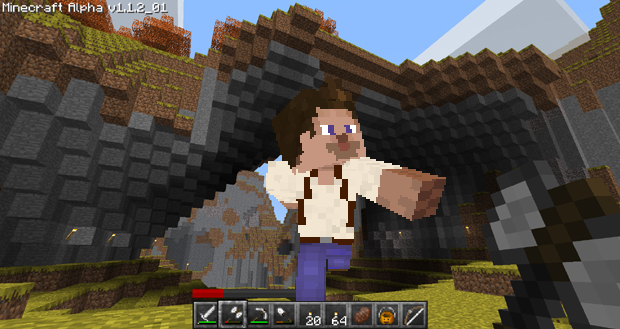 Our own Jim Sterling recently posted an article about how he sometimes feels alienated from the gaming community because he doesn’t appreciate  “classic” games like Shadow of the Colossus. It’s a great piece, but admittedly, a little part of me felt bitter while reading it. “You think it’s hard not liking a PS2 title that sold under a million copies in the United States?’ I whined to myself “What do you think it’s like to be a non-fan of Uncharted, GTA, Mass Effect, Elder Scrolls, and just about every other ‘realistic’, overblown, action-focused, power fantasy game on the market today?”

The thing is, there is a chance I could have liked Uncharted, if it focused less on pretending to be an action movie, and more on taking advantage of the fact that it was a videogame. This whole “try to make every game like a Hollywood movie” thing that Sony has picked up in the PS3 era has been pretty rough for an old Ape Escape/Gitaroo Man/Parappa-days Sony fan like myself. Sadly, it sounds like I almost had a chance of enjoying Uncharted, but according to Naughty Dog, “Sony kept pushing for a more realistic game in all respects. The market had changed a lot by then. The demographic was older and gritty shooters were really dominating. Sony wanted very much to get into that market share, it pushed all of its developers in this direction.”

Now that the Wii, the DS, and the iPhone have been “really dominating” for most of the past five years, I wonder if PS4 games are all going to be “pushed” to look like Wii Sports and Angry Birds? I might be down with that.

Once upon a time, Uncharted was a Tolkien-inspired fantasy romp [Joystiq]