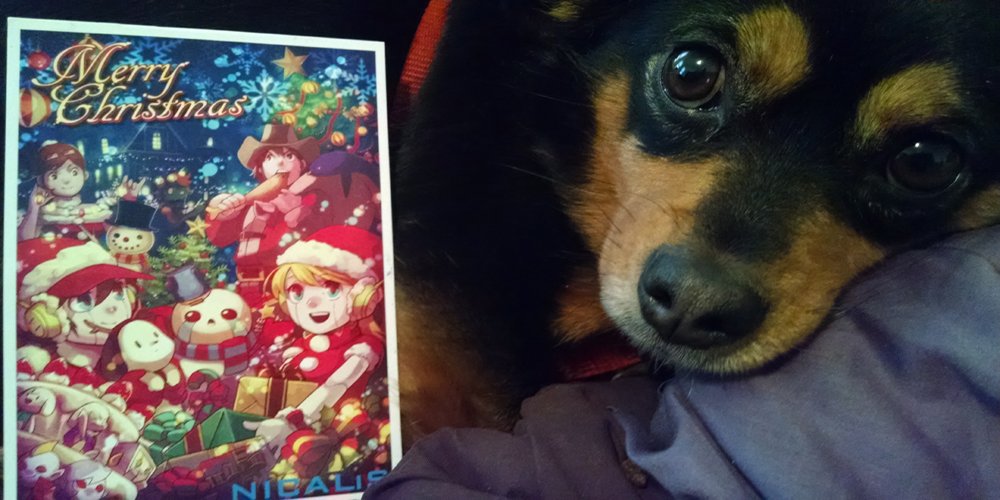 If you squint really hard, you can see a second dog

Nicalis is well known for staging elaborate stunts to keep their fans guessing. The recent Binding of Isaac: Afterbirth ARG, headed up by Edmund McMillen, is just one recent example.

Knowing that the company has the tendency to embed secret messages in even the most innocuous of media has me wondering what their 2016 Christmas card might tell us about their plans for 2017. Right away we see Aban, Tina and a zombie from 1001 Spikes, Quote, Curly, Balrog, and a few other characters from Cave Story, and an Isaac made of snow. There are also some vampire looking people on the bottom left hand corner of the card that I don’t recognize. They could be from a new intellectual property, or it could be that my failure to play through all of Ittle Dew 2 and Creepy Castle has left me ignorant to some of the more recent additions to Nicalis’s ever growing stable of characters.

So what does it all mean? Well we’ve already heard Tyrone from Nicalis greatly hinted at Switch ports for Isaac: Afterbirth + and 1001 Spikes, so that leaves us to guess about what could be going on with Cave Story. There was a hint of Cave Story 2 forever ago, and some fancy renders of Cave Story favorites have been popping up on Twitter in the past few months, but it’s hard to predict where it’s all headed.

If Nicalis is working on an animated adaptation, sequel, further enhanced version of Daisuke Amaya‘s classic action platformer, what you want out of it? New 2D graphics? 3D graphics? PS4 port? Switch exclusivity? I know Nicalis will read into all your comments, so feel free to be as direct or as cryptic as you see fit.