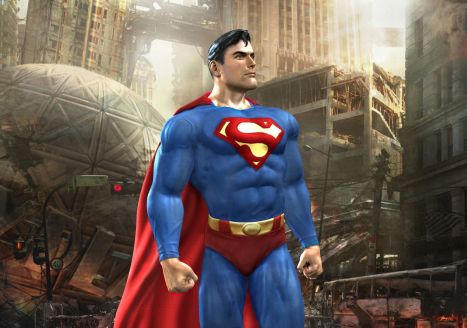 Wow, what a total surprise. One of DC’s most iconic characters is going to be in Mortal Kombat vs DC. Who ever would have guessed this would have happened. I am totally shocked and amazed that the legendary Superman is in this game.

Okay, enough sarcasm for one night. As you can see by these new images from the official MK vs DC Web site, Superman is ripped and ready to kick some Outworld ass. The image shows Superman in a very devastated Metropolis with the Daily Planet building destroyed in the background.

We also have a new concept shot of what looks to be a stage from the Mortal Kombat dimension. The place looks pretty much like Hell with lava and skulls all over the place. No clue as to who the two fighters are in the middle of the image.

So what do you all think of the Man of Steel here? And please, save your comments about how Superman should be able to kill everyone with just a punch and what not. It’s obvious that all the fighters have some form of Kryptonite on them that makes Superman weak. Or hell, I don’t know, maybe the sun has turned red. I know we’re going to hear some dumbass excuse eventually about this.

[Update: Looking through the Wikipedia bio of Superman, it’s said that his powers can be disrupted by magical/mystical attacks. That would work for me as an excuse as to why Superman isn’t as strong as usual.]