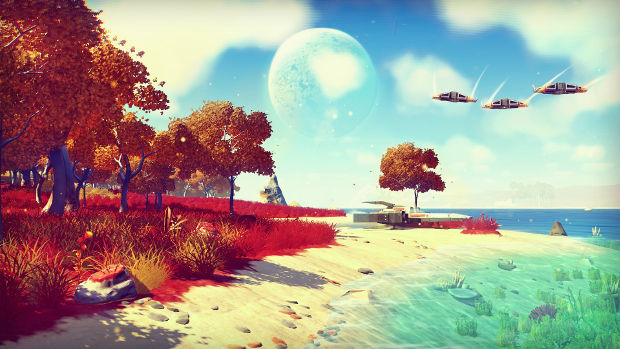 An FU to the ‘guy in the comments’

At a gamescom presentation today, Sean Murray from Hello Games wanted to give his comeback to a “guy in the comments” that goes against his claim that the universe of upcoming game No Man’s Sky is infinite. The comments guy insists that nothing on a computer is infinite. Murray says that he hates this guy. But he’s right.

The universe in No Man’s Sky is not infinite. It’s just very, very large. The universe is generated from a seed number — a 32-bit number. This seed (it’s actually the phone number of Hello Games’ Dave Ream) is the start, and the planets of the universe are generated from that seed in a chain reaction. At 2 to the power of 32, that gives the world a few billion planets to explore. Murray says that if you explored a planet every second of the day, you might see repetition after between 4,000 and 5,000 years. In other words, if you were playing since Roman times, you might see repetition right about now.

Just in case No Man’s Sky became a wild success, Hello Games took the seed number up to a 64-bit number. That’s 10 to the power of 19 — a huge number. Now, with this, Murray says that if you explore a planet every second, it would take you 4 or 5 billion years to see repetition in the universe. “We will all be dead; our sun will not work,” Murray joked.

“Effectively, fuck you, guy in the comments.” Murray said. “Prove us wrong.”