The Division’s only been out for about two weeks, and somebody’s already maxed out both their level and Dark Zone rank. 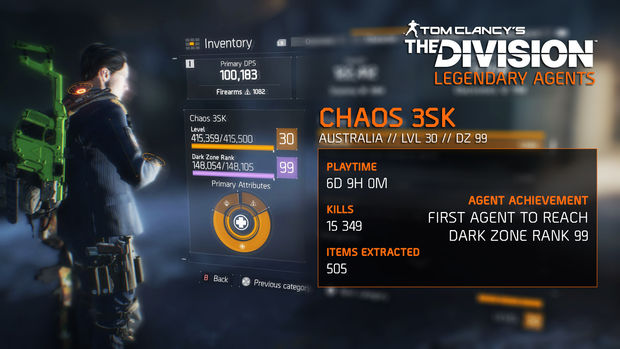 An Australian player by the name of Chaos 3SK clocked 153 hours of game time (that’s six days and nine hours) to be the first player to have level 30 agent with a Dark Zone rank of 99. That means in the 11 days after launch it took for Chaos 3SK hit the cap, they played, on average, 13 hours of The Division per day. Blimey, I’m still only level 13…

Okay, let’s get serious for a second. People are free to spend their spare time however the hell they like, but please be careful when binging on a game for long periods like this. We’ve all heard the stories of people collapsing and dying in cybercafes after playing non-stop for eighty hours, so make sure take whatever precautions you can so that doesn’t happen to you.

Anyway, looks like I’ve got some major catching up to do on The Division.