Here are the basics, and it’s pretty straight forward: During any time, a second player can be invited to join a game in progress. Each player will control the game’s main protagonist, Chuck Greene, and any kind of continuity or logic gets thrown out the window in lieu of pure fun. The story doesn’t change, as the missions and game layout will remain identical whether you’re playing alone or with a friend. But make no mistake about it — killing zombies and saving survivors with a buddy is a hell of a lot more fun (and safer) when you do it with a friend.

Hit the jump for more details. 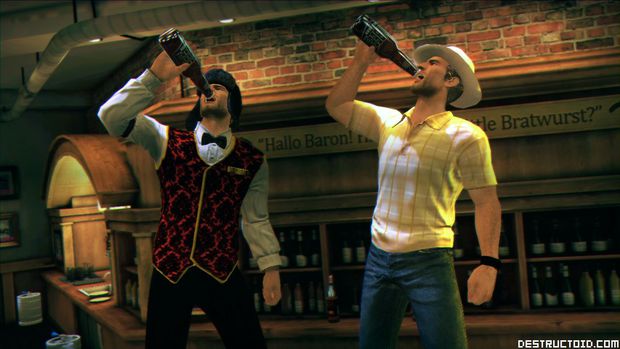 The name of the game here with Dead Rising 2 co-op has less to do with making any sense from a narrative standpoint, and more to do with all of the crazy sh*t you could only do with a second Chuck Greene at your side. According to Blue Castle, all kinds of new gameplay emerges when two players are thrown into the Dead Rising 2 sandbox, and this was very easily proven during a short hands-off demo, and later when I got my hands on the controller.

An example had one Chuck using a fire extinguisher to freeze zombies; once frozen, a second player could drop kick or hit the frozen ghoul with a bat to shatter it to pieces. In another example, we saw some strategy as one player collected items and weapons, while another spent time fighting off the hordes.

It also seemed as if Blue Castle had added many game moments and interactive environmental objects that simply screamed co-op. While playing the game alone, I struggled to fight off two homicidal twin Vegas showgirls; with a second player having my back, sending them to their grave was not only easier, but a lot more enjoyable. A giant interactive video poker machine in the middle of a casino was nearly unusable alone — I kept getting hassled by flesh-hungry zombies while trying to win big. With a second player, I was able to focus on my gambling addiction without the worries of a creature gnawing on my face. 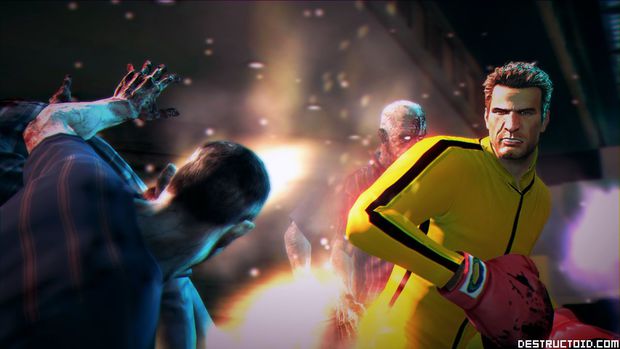 From what I could tell, the cooperative mode was not really limited in any real way. Yes, the entire game can be played with a second player who can drop in and drop out at any time, with the host “owning” the game. This means that whoever starts the game will be the owner of the save file and the story; the second player can participate and advance, but once he or she leaves, their earnings will only be in the form of in-game money and any PP (experience) points earned.

Players aren’t tethered to one another within areas, with one caveat — certain story elements (like those beyond doors) cannot be triggered unless both players are within a certain distance. Before the aforementioned Vegas showgirl battle could begin, I had to wait patiently for my partner to get bored using a vacuum/saw blade combo elsewhere in the casino before I could move forward. As you can imagine, that could take awhile. Because honestly, when does anyone really get bored using a vacuum/saw blade combo?

Cooperative play was the big Dead Rising 2 reveal at Captivate, but producer Keiji Inafune says there are “more scoops” yet to be revealed. Unfortunately, he tells us, “press restrictions” are keeping him from spilling the beans. Damn you, “press restrictions” — how about a date with my vacuum/saw blade combo?