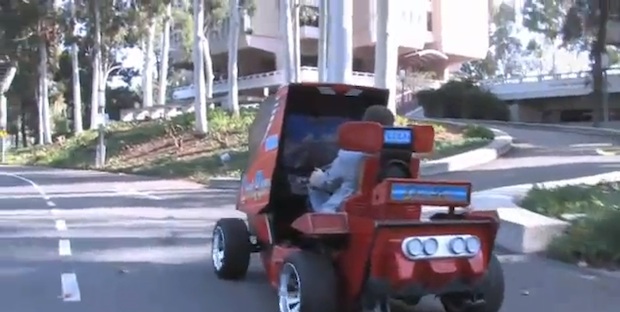 This is a driving videogame. I mean, the game cabinet itself moves. University of California at Irvine’s OutRun Project is ultimately looking to create gaming therapy systems for quadriplegics, but somehow along the way they’ve blended a golf cart and an OutRun cabinet and have created a driving game that you can actually drive.

With this contraption you’re not actually playing the original Sega racer OutRun, but it looks at lot like you are. The cart features two video cameras that scan the environment in front of the car, while custom software analyzes what they see. That software then displays the road on screen, but rendered in the graphics of the game. Gizmag says that the software can’t actually see things like other cars yet, so you wouldn’t want to hit the real road with this thing.

The creator also proposing an iPhone augmented reality app that would let users see the world around them as if it were in the OutRun world. I’d love that.