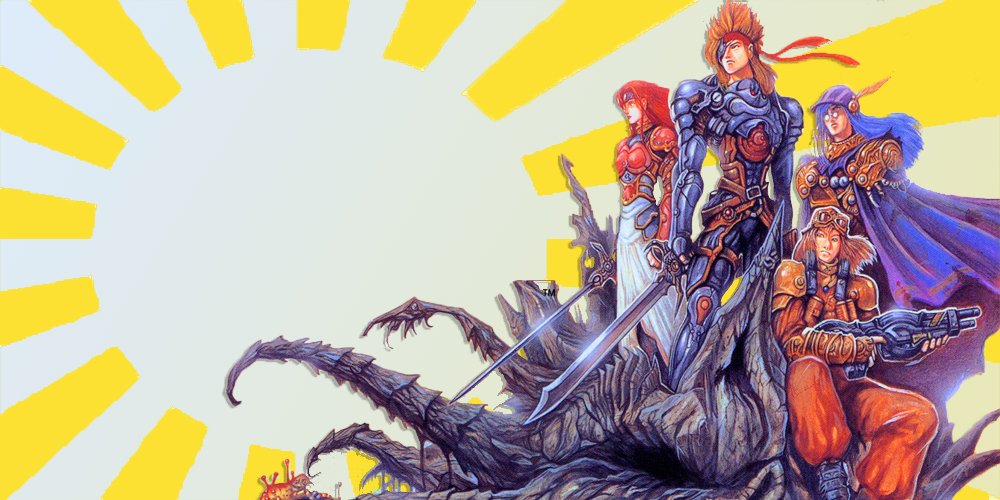 Squaresoft was second only to Nintendo in the 16-bit era when it came to influence and a strong track record. From the genre-defining Secret of Mana to the crowd-pleaser Chrono Trigger, Square had a knack for telling a great fantasy story, wrapping it around the best visuals the Super Nintendo could put out, and making it accessible to an audience outside Japan. There isn’t a weak link in the company’s Super Nintendo catalog — but, then again, we got less than half the games it published in Japan.

Treasure of the Rudras may not be as significant a loss as some anticipated sequels (Secret of Mana 2, Final Fantasy V) or an entire trilogy (Romancing SaGa), but it’s an interesting game to examine. Made by what can only be considered Square’s B-team (or was it C?), Rudras was the last game Square developed for the SNES. Rudras is Square’s most eccentric developers trying to make a traditional RPG, resulting in one of the studio’s most innovative but flawed games.

With 100+ employees and millions being funneled into its next-gen Final Fantasy, Square needed something to give fans while they waited for the reason to buy a PlayStation. Treasure of the Rudras brought together key members of the Final Fantasy Mystic Quest and Romancing SaGa teams to make another RPG that borrowed heavily from the Final Fantasy template but not without mixing things up.

For a developer that often gets lambasted for making games too linear, Rudras is pretty open and experimental in its approach to combat and story. Upon starting a new game, you’ll be told a fairly generic background tale about how the world is destroyed and recreated by the gods every 4,000 years. It’s happened to the reptiles, giants, merfolk, danans, and now it’s going to happen to the human race in 15 days. Oh man, that’s us!

Here’s where things get interesting: You get to pick which of the three main narratives you want to start first. Each story follows a different character with a different party on a separate part of the world. Sion is a young soldier who wants to prove his strength to his father, a king. Riza is a priestess who leaves home to find her mother and determine her destiny. Surlent, whose story is the most interesting of the three, is the disciple of a prophet and seeks artifacts that will save the world.

Regardless of who you pick at the beginning, you’ll be able to change to another character’s story whenever you load your game. To be clear, these are not recycled; these are three completely unique campaigns wrapped up into one game (and a final unlockable chapter that I won’t spoil here). You can choose to play one at a time, but part of what makes Rudras so special is the player’s ability to constantly jump from one plot line to the next. Since the game is divided into 15 chapters (for 15 days), I found myself changing after three-to-five days with one character.

When you play this way, the game feels a lot like the HBO series Game of Thrones. The distant city one character talks about is the starting kingdom of another character. You’ll see locations and enemies in a new context, as you learn from a new perspective on the other side of the map. Things can get really warped when the stories are out of sync and yet you see travelers from another story in your periphery, essentially breaking the game’s own timeline. The stories themselves aren’t very good, but the way they compliment each other and the freedom given to the player makes up for this.

If the approach to storytelling sounds overwhelming, you may have more than a slight problem with combat. There is a Wizard of Earthsea vibe in the Rudras’ fiction and art direction, but this is especially true in the magic which focuses on words. Linguistics geeks will eat up Rudras‘ Mantra system which replaces spells learned and bought in town with words, prefixes, and suffixes that you gather from people, enemies, and chests.

At any time, the player can inscribe new spells to their repertoire by writing them down. You can cheat and copy powerful spells from a guide online or you can write down random words and hope to get lucky. If you play the game as intended, you’ll thoroughly explore towns to learn new words to use. Here’s an example of how the system works. Perhaps you start with the healing spell “Lef”.  If you add a “na” at the end to get “Lefna” you acquire a healing spell that targets all members. Now you can take that suffix and apply it other spells with mixed results. Soon, you’ll decode a made-up language and feel like a word wizard.

Here’s the problem with this system: It’s too easy to miss something important. Rudras is already a horribly balanced RPG, one ripe with weak enemy mobs and overpowered bosses. You’ll constantly worry that you missed a word or combination. Even at the start of the game, it’s essential that you have powerful spells at your disposal. A lot of times, the only way to get these spells is by talking to people in town (and, even then, you may need to talk to them multiple times). This takes away a lot of enjoyment from the system. The game would have been much better if it were consistent with how players received these words. I would prefer if word elements were given for leveling up, leaving it to the player to figure out the combinations — but still giving players the confidence that they already have all that they need to get the job done.

After the audio/visual tour-de-force of Final Fantasy VI, Chrono Trigger, and Super Mario RPG, it’s hard not to have high expectations for a SquareSoft game that followed them and essentially served as the developer’s farewell to the system. Expect your expectations to be crushed, because Rudras is a budget game that few notable Square employees touched. The music and graphics are a significant step back. There are elements of Final Fantasy VI and Seiken Densetsu 3 in the mix, but the lack of detail and recycled assets make Rudras sound and look like second rate Square. That’s not to say it’s bad, though. Some of the music — done by Mystic Quest’s Ryuji Sasai — is great and the visuals will make 16-bit gamers nostalgic. Just don’t expect it to be on par with late-Square. Think Final Fantasy V instead, and you won’t be so far off.

A lot of Western gamers romanticize Square’s SNES years and mourn all the games that never came out West. I have only touched the tip of the iceberg with Treasure of the Rudras, but it hasn’t exactly made me excited to play the rest of Square’s Japan-only SNES output. Rudras is game with interesting systems, but it lacks the polish, balance, and strong art direction that defined Square’s early years. If you are open-minded and ready for a challenge, Rudras may be exactly the Square game you wanted but never got. Or, it may be the Square game you never knew Square were capable of putting out — and I don’t mean this in a complementary way.

Did you worship Square during the 16-bit years?

Have you played any Square imports?

Do non-traditional magic systems turn you away or attract you to RPGs?