Games based on films have a perceived stigma that indicates they are, more often than not, an utter waste of time. The games made under the Back to the Future license are partly to blame. Most likely, your favorite memories with the franchise have something to do with the films or Universal Studios ride — far away from the abysmal Nintendo platformers by Beam Software and the Commodore 64 adventure game.

Telltale has done much to change this perception with its recent adventure series, but maybe they wouldn’t have had so much stacked against them if Toshiba-EMI had released Super Back to the Future II outside of Japan. Instead, it’s become an import novelty and a curiosity to fans of the franchise. It might not be a great game, but, in comparison to the grade-A crap ones that reached the West under the film’s title, it’s damn-near miraculously good. 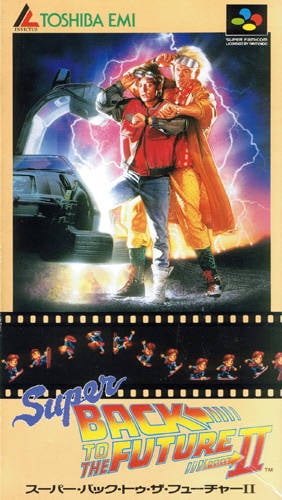 One quick glance at the game and it’s apparent that it was made with an audience in mind, and it’s not a Western one. Love it or hate it: Marty McFly, Doc, and Biff have been anime-ized. Marty and Doc are adorable, stocky caricatures of themselves, while Biff is a hulking beast fit to be the boss (again and again). Pair this unlikely character design with a catchy soundtrack, and game design reminiscent of Sonic the Hedgehog, and you get Super Back to the Future II — a decent, if not good, movie-licensed game.

There are a lot of memorable scenes in Back to the Future II, but among the most iconic is when Marty escapes Griff’s wrath via a hoverboard. After watching him dodge between cars and float across a fountain, my eight-year-old self couldn’t wait until the year 2015 when I’d be able to ride one. Turns out I was waiting for nothing but at least I can do it virtually, now, within a game from … 1993.

In SBttF2, Marty never gets off the hoverboard as long as you are controlling him. At the end of each stage, he has an animation where he gets off and spins it, but that’s it. Despite all the game’s flaws and odd level design, it’s hard to ever hate it due to the inarguable greatness of the hoverboard. Instead of Marty running around in his red baseball cap and down-filled jacket vest throwing yo-yos at goons like a chump, he pummels them with his hoverboard and bounces on their heads like a trampoline. 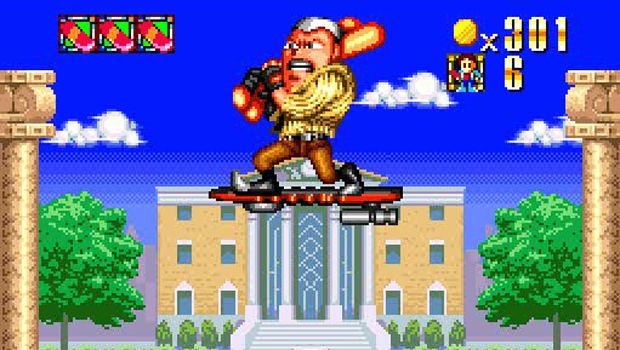 With a spin attack, the ability to jump, and a button for gaining speed, you must navigate the labyrinthine levels of increasing difficulty and defeat the stupid-easy bosses. Strangely, the game doesn’t always feel like it was designed with the hoverboard in mind. The hoveboard gives you speed  — maybe not hedgehog-speed, but still — so it makes no sense that the camera is zoomed in so close.

You can’t see what is in front of you and will have to repeatedly stop as the screen scrolls. It feels almost like a Game Boy game dealing with the limitations of its resolution but this is Super Nintendo, dammit! You don’t need to be zoomed-in so close! You are making a game for screens much bigger than a Game Boy!

I would feel safe in going max speed on the hoverboard, only after dying so many times on a stage that I began to inadvertently memorize the enemy placement. Otherwise, I felt like I was playing Jetpack Joyride, where any second I can and will run into an instant-death trap.

Occasionally, the maps will take advantage of the hoverboard and give you some ramps to jump off but not often enough. There are also bonuses you can reach by aimlessly jumping off an edge at max speed, hoping there is an extra life on the other side instead of a wall of spikes. Pro-tip: it usually is a wall of spikes. 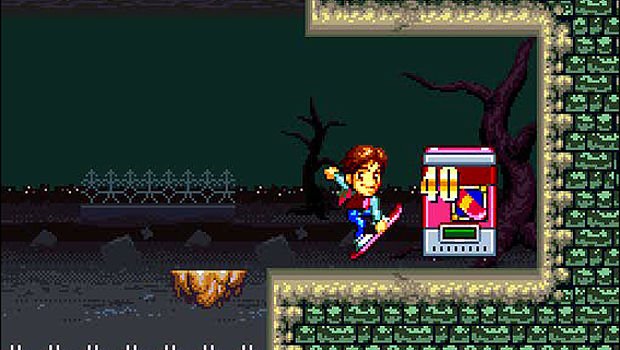 Collecting coins/rings/whatever in games usually amounts to nothing more than a higher score and who plays platformers for hi-scores anyway?

By storing power-ups, health and 1UPs in vending machines of varying prices, SBttF2 cleverly solves this problem by giving the player an incentive to collect coins. Instead of ignoring alternative paths, you’ll find yourself searching every corner of a map if only to increase the likelihood of survival. There is nothing more gratifying then getting halfway through a stage on one heart and finding a vending machine to give you one more. And, there is nothing worse than not having the money for it.

Why don’t you make like a tree and get out of here?

Perhaps, I haven’t sold you on Super Back to the Future II. Well, that’s okay because it honestly isn’t a lost gem worth seeking out. It’s an average platformer that is brief and nostalgic enough to check out, if you find it cheap. The main reason I chose to highlight the game for this week’s entry is for the collector and curious import gamer.  The odd nature of the project is worth a discussion alone.

Sure we’ve seen Crash Bandicoot and other Western gaming mascots become “Japanimated” but it’s different to see it happen to a popular Western film. It’s kind of unsettling, like imagining a world where all my favorite American films growing up were average Japanese platformers. I don’t want to live in that world. Besides, those Jurassic Park games weren’t so bad, right?

Do Japanese takes on American properties freak you out?

Who would win in a fight Pepsiman or anime-eyes Marty McFly?

Would you give up your game collection for a hoverboard? Who am I kidding, of course you would!