Magical Pop’n is the reason I do this series. I mean this figuratively and literally. It’s the rare, coveted import that lives up to the hype, if not the ridiculously high eBay listing price. Make no mistake: If the game had made it to the West in the mid-’90s, Magical Pop’n would frequently be mentioned as one of the best action-platformers of its era.

Through the information well of the Internet and magic of emulation, we can now discover for ourselves this gem. You don’t have a good excuse not to. Now sit down and put that controller in your hand and get ready for 16-bit platforming bliss. 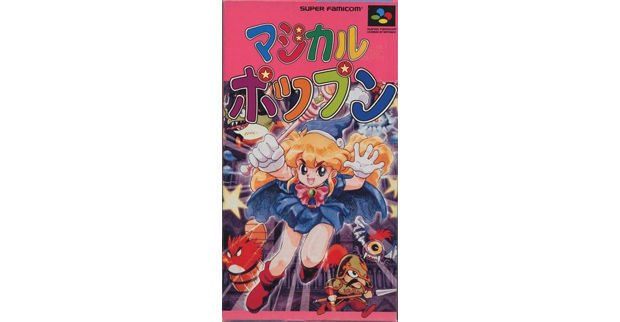 The biggest question that rings in my head when playing a game as polished, unique, and downright fun as Magical Pop’n is “Why did it never make it to the States?” Call it pure speculation, but I’ll call it sensible reasoning: My feeling is that a game starring a female lead was about as popular with game publishers as the Super Nintendo in 1996. However, it’s these two things that partly make the game such a charming, good time. 16-bit fetishists will eat up the colorful landscapes of Magical Pop’n and the dwarfed princess is the perfect tour guide through it all.

If Super Metroid were an arcade game, it’d resemble Magical Pop’n. Like Metroid, you’ll frequently find yourself blocked from a certain path in each of the game’s six stages. The only way through the path is by finding a new ability and applying it to the obstacle. You’ll also encounter enemies and bosses with weaknesses that beg the player to use the recently acquired ability. The game doesn’t limit your options in a boss fight like Zelda, however.

You don’t have a map and aren’t likely get lost, but the game has multiple paths, hidden areas, and even hearts you can collect that will permanently increase your health. If you like the progression system of Metroid but want less backtracking, Magical Pop’n may appeal to you.

Continuing on the Metroid comparison, you’ll find yourself constantly rolling back to previous abilities you unlocked throughout the game. Not only is it quick and easy to change your ability, but each of the six spells is unique and serves a purpose.

These abilities range from the starting laser projectile to a Bionic Commando-like grappling hook. As you visit the sky palaces, woodlands, and other levels, you’ll acquire fire, ice, bombs, and even a Sonic-esque spin attack. Each ability costs a certain amount of stars, which you’ll collect throughout levels. You can hold up to 99 and will rarely run low. Each ability has a secondary attack that costs 10 stars that will make bosses easier but the following areas harder if you have exhausted your resources.

In addition to providing the game with some nice visuals, these abilities alter the way your approach the environment and bosses. Since the weapons are diverse, you’ll find there are multiple ways to defeat enemies. It gives the game depth and replayability.

I absolutely adore the way Magical Pop’n looks. It has that bright, chunky anime look that Magical Taruruuto-Kun and Kid Dracula share. The backgrounds lack detail, but there is plenty of character in enemy and player animations. The bosses are especially memorable with some really quirky damage reactions and attacks.

To some, Magical Pop’n may look like a PC Engine game, but I love it for that. The colorful anime-inspired look is something that you didn’t often see on the Super Famicom. Magical Pop’n makes me wonder why.

Right next to Super Mario World and Super Castlevania IV, Magical Pop’n is the best-feeling platformer on the system. What’s even more impressive is that it’s faster and more fluid than both.

The princess has a lot of moves at her disposal, from a slide to a Zelda II-esque downward strike. Going from one to the other and moving around is always smooth. SNES games are typically slower than Genesis games because of the CPU, but Magical Pop’n somehow manages to be as fast and fluid as Sega’s best.

In the teen boy-dominated market of the ‘90s, few kids wanted to play as a cute princess with a wand. Give the game a chance, though — you may find the main character endearing. Along with some great animation and character detail, developer Polestar was very progressive in designing her.

In addition to hiring popular anime artist Takami Akai to do the box art, Polestar got softcore pornstar-turned-Japanese-idol (oh, Japan) Ai Iijima to do the voice work. Unlike other SNES games, the groans and brief audio clips sound pretty good and never got on my nerves. The princess is so fully realized in the 16-bit world that I could easily see her making the transition to an anime series or manga. Unfortunately, this would be the last time we saw the character.

Pop it and lock it

There are a couple Japan-only platformers that been put on a pedestal by import seekers over the years. This season of It Came From Japan will cover a couple of them, but I’ll be shocked if any of them impress me more than Magical Pop’n. The game isn’t very long or mind-blowingly unique, but it stands up with some of the best games of the Super Nintendo. Great boss fights, reasonable difficulty curve, fun abilities, and fluid controls; the game really has it all. This is the reason I love to write these articles. Every now and then, I stumble upon a game that could have defined my childhood if I had played it in the ‘90s. This is one of those times.

Were you strongly averse to playing characters of the opposite gender as a kid?

Did you ever read about Magical Pop’n in the international sections of old gaming magazines?

What’s up with evil penguins in Japanese games?