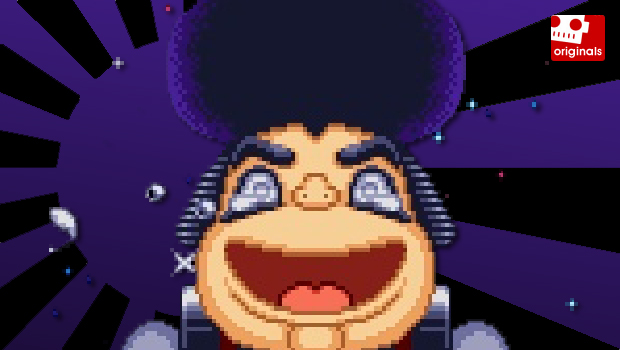 When you think of Japanese gaming, you think of Konami’s Ganbare Goemon series. At least, you should. Outside of a few series entries, most notably two stellar sequels for the Nintendo 64, Goemon never had much presences in the West. Most of us were introduced to the purple spiked-hair ninja through the early Super Nintendo title The Legend of the Mystical Ninja (1992 in North America).

As exciting as that game’s world and co-op were for the time, Konami continued to build upon its template until it arrived at the fourth Super Famicom title, Ganbare Goemon Kirakira Douchuu: Boku ga Dancer ni Natta Wake (“The Glittering Journey: The Reason I Became a Dancer”). Best title ever?

Goemon 4 pushed the SFC hardware in order to deliver one of the system’s weirdest, most ambitious, and difficult platfomers. 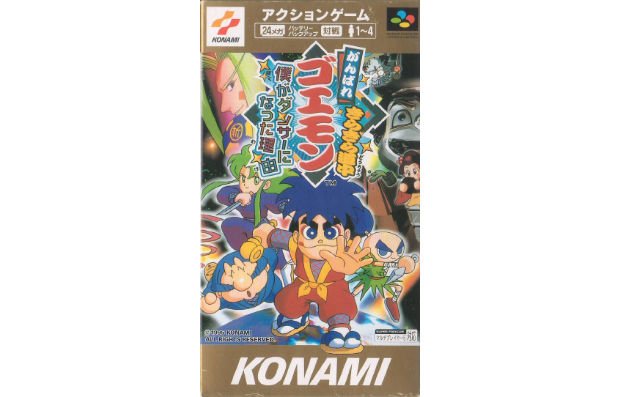 Fan translation: No, but this FAQ and these videos help
For fans of: The Legend of Mystical Ninja, Castlevania, Strider

I don’t think there is a series more Japanese than Ganbare Goemon. What other game takes place in feudal Japan while also throwing in every anime and “Japan you so crazy” trope you can imagine? You have mechs, horny old men, ninjas, and more. On top of that, past entries have directly poked fun at Westerners and Catholics. It’s a series that knows its audience, which only makes it seem more original and bold to the eyes of an outsider. Considering Nintendo took out a fart joke in the first SNES Goemon game, it shouldn’t be a surprise that Konami didn’t bother to bring over its sequels.

Much like Sonic the Hedgehog‘s later entries, Goemon‘s sequels expanded on the original’s format with a larger cast of playable characters and an expanded world. Goemon 2 offered a straight-forward platformer with more characters, Goemon 3 presented large Zelda-like world exploration, and Goemon 4 ties all the previous games’ ideas together for one last 16-bit outing. As a result, the game is brimming with brilliant ideas, mechanics, and colorful environments. In one stage, you are using Goemon’s chain-pipe to swing across platforms (a la Castlevania), while in the next, you are climbing up walls and slicing enemies with Sasuke, a robot ninja who feels like a direct tribute to Strider.

It’s hard to make sense of the absolute madness that is the world of Goemon, but … Goemon 4 seems to be about Goemon and his crew’s journey to save a remote planet from the threat of Harakiri Seppukumaru (typical anime douchebag) and his followers (weird marshmallow looking bosses). At the behest of Impact, Goemon’s giant mech friend who randomly kicks Goemon’s house over at the beginning, you are sent to four planets in disorder thanks to evil jerkface final boss guy’s suppression. Each member of Goemon’s crew — Goemon, Ebisumaru, Sasuke, Yae — land on a planet they must secure before regrouping for the final planet and boss fight. As a result, you’ll have four very different worlds and playable characters that make for a more memorable adventure than past Goemon games.

The basic structure of Goemon 4 is similar to the first two SFC entries. Half of the game is spent beating side-scrolling stages and the other half is spent exploring towns. In towns, you can buy health boosts, talk to people, and unlock upgrades needed to progress. These sections may frustrate Western players, since there are puzzles and dialogue sequences that require knowledge of Japanese. This game is best played with a FAQ by your side at all times, since there are many sections you’ll get stuck in otherwise.

The towns don’t add much to the overall game and get in they way of the action. Perhaps I’d look at them more favorably if I knew what the hell everyone was saying, but they still feel like busy work. There is nothing fun about checking every house for one person or memorizing routes. On the other hand, the towns help establish the world of Goemon and make the adventure feel much more grand. I just wish there weren’t so many of these pit stops.

Even the platforming stages are far from normal . Most of the time, you are just jumping and fighting your way to the right side of the screen — you end the stage by striking a rotating tanuki that gives you money or poo — but you’ll often come across many surprise obstacles. In one stage, you are falling down a pit of spikes and enemies, while in another, you are fighting upon a car falling from the sky. I can’t think of another SNES title with as many unpredictable diversions as Goemon 4. From surfing against a tidal wave to jet skiing across a mountain,  these stages will keep you playing just so you can see what comes next.

As a result of this ambitious design, the platforming is lackluster. Each character controls differently, but I found both Goemon and Ebisumaru too sluggish for the game’s stages. One stage, “Batters’ Cave,” includes one of the most maddening platforming sequences to grace any 16-bit game. Part of the frustration is the camera that is so close to the the hero that you often can’t see what’s ahead of you. These platforming sections sometimes become a guessing game or memorized obstacle course.

I often considered giving up on the game during some of the stages. The reason I didn’t is because I wanted to see each world’s insane boss fight. While the game does have some more traditional bosses by way of mini-bosses, the final bosses are glorified mini-games. For example, Yae’s final boss is beaten by winning at a Puyo Puyo-esque puzzle game. In another, you play a timing-based game that wouldn’t feel out of place in WarioWare. Not all of them are fun — in fact, every one of them is frustratingly difficult — but they are amusing, nonetheless.

Goemon 4 is more of a spectacle than a great game. Sometimes the platforming feels okay, but it often is best thought of as filler. Goemon 4 lacks the large world of Goemon 3 or the detailed towns of Mystical Ninja, but it’s a fun journey filled with weird left turns and wacky visuals. Add to that a classic Konami soundtrack, and you have a recipe for a memorable 16-bit adventure. Just be aware that this is one of the hardest games you’ll ever play. You can use save states. I won’t judge.ï»¿

What games have you played in the Goemon series?

What is your favorite Goemon game?

Why do you suspect Konami never brought most of these games over?