It’s still the first week of October, so it’s not quite time yet for the really horrific stuff. No, these are the days for Dark Souls, features about wizards, and late, drunken nights of cheesy, B-horror movie viewing. Now is an ideal time for a look back at a little gem that never came to the States called Boku Dracula-kun.

Konami’s adorable Castlevania spin-off is a charming, well-designed platformer that lets players take the role of a preteen vampire. Although small and offensively cute, Kid Dracula (Dracula-kun) could easily put the hurt on Spike McFang. Despite being the distant spawn of the grim, unforgivingly difficult Castlevania series, Dracula-kun is a lighthearted and brief Konami classic that is highly recommended to anyone looking for an early-October Halloween game or Nintendo platformer. 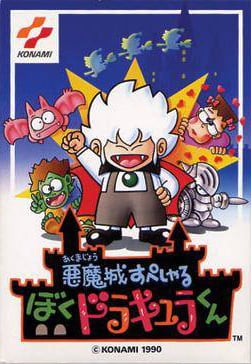 Dracula-kun is not part of the Castlevania canon, but you can think of its protagonist as a pre-teen Alucard, son of Alucard, or Alucard’s brother if it makes you feel better. The elements that this platformer shares with Konami’s signature Nintendo series are few and far between. For the most part, Dracula-kun is its own thing, but it borrows plenty from Mega Man, Contra, and other platformers of the time.

The story of Drcaula-kun is fairly ridiculous. If the opening scene is any indication, Kid Dracula (the name given to him in America for this game’s Game Boy remake/sequel) wakes up from a 10,000-year sleep to hear the Grim Reaper whine about some dinosaur who is causing havoc. So Kid Dracula sets off across the world to put devil dinosaur-thing Galamoth to rest. I’m not really sure this is the story — I played in Japanese, so let me know if got it wrong. Either way, I’m pretty sure there is no good explanation for visiting an amusement park or beating up Spider-Man clones in New York.

Instead of using a whip or robotic arm, Kid Dracula spits out fireballs. The controls feel great — you can even shoot up or jump and fire downward. Like Mega Man, holding down the fire button will charge your shot, and you’ll acquire new abilities after defeating each boss to augment your charge shot. Unlike Mega Man, the bosses don’t use these weapons against you and rarely have a reason for having them anyway. These charge shots range from snowballs that will freeze your enemies to the ability to transform into a bat (used for certain platforming sections).

Although you can switch between the powers with the select button, the game would have played a lot better with the Super Nintendo’s shoulder buttons. You can pause the game and switch weapons during desperate moments, but it still feels awkward. To make matters worse, you need to wait for your projectiles to clear the screen before you can properly switch to a new charge power. This never caused me much trouble, however, since I mainly stuck to one weapon throughout the game. 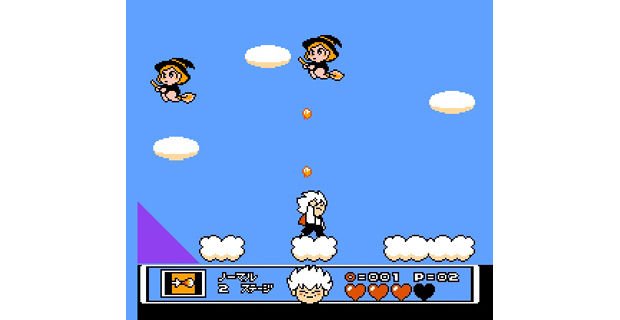 Dracula-kun isn’t a cakewalk, but making use of the homing missile weapon that you get from defeating the first boss certainly helps make it easier. Not only does the ability deal a great amount of damage, it also has a wide spread that rarely misses. Since there is no limit on charge shots, you can spam it on bosses without much difficulty. I was able to defeat some bosses without suffering a single hit, but you’ll have a much tougher time on the last stage which limits your arsenal’s impact.

The bosses in Dracula-kun are as random, colorful, and impressive as the game’s stages. Overall, the game is one of the best-looking in the Famicom’s entire catalog — few developers knew the hardware as well as Konami by 1990. Boku Dracula-kun opens with a very traditional Castlevania-inspired stage that even borrows assets from the series, but even if you don’t recognize the clock gears in the background or the swinging pendulum, you’ll certainly feel at home as you climb the ominous steps to the boss fight. 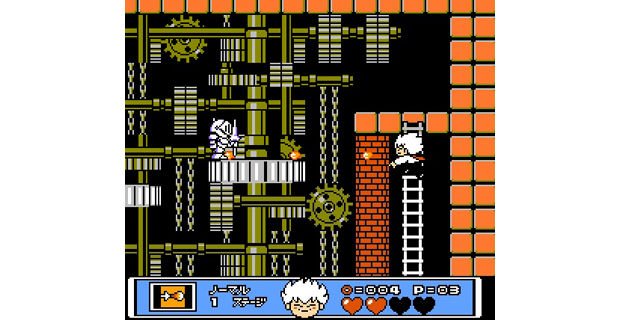 Since YOU are (Kid) Dracula, you can’t have a proper fight against another vampire. Kid Dracula wouldn’t stand for that, so who does Konami send in for Kid Dracula to fight instead? A KKK leader wearing white sheets with an embroidered swastika, of course!

Although it’s unsettling and surreal to see a swastika in a kid’s game, I’m not sure if it qualifies as being offensive. After all, you are defeating a Klansman! In the U.S. version of the Game Boy remake, Konami removed the swastika and unveiled the figure to be an old wizard, once defeated. That’s lame, part of why we aren’t talking about that game — not yet, anyway.

Although nothing can possibly top that opening boss fight, the following ones are more visually and mechanically interesting. Other highlights include a blue dragon that loops across the sky in crazy patterns, a tall robot that you have to fight upside-down, and a hard-as-balls final boss that will make most players cry, assuming you can get past the maddening mini-boss before him.

Each level is gorgeous and completely different than the one before it, along with unique enemy types that fit the theme. Once you depart the Klansman’s castle, you’ll fight cacti in Egypt, robots in space, and Spider-Man and Jason Voorhees clones in New York City. The game even has an homage to the airship levels of Super Mario Bros. 3! 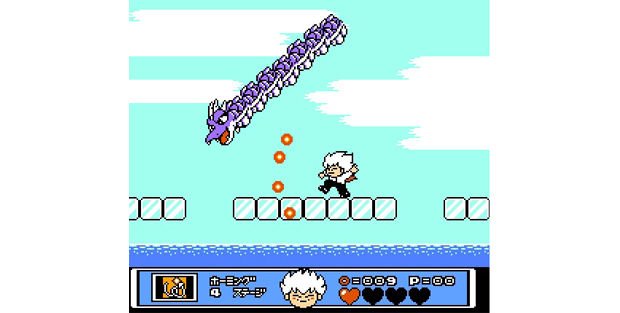 Even better, the boss of the NYC stage is the Statue of Liberty! Instead of taking you on in a direct fight, she puts you on a quiz show and asks you questions about America. This wouldn’t be so difficult had I not been playing it all in Japanese! To be fair, she also asks for the name of Konami’s, which I wouldn’t have gotten right in English, anyway.

Boku Dracula-kun is full of little moments like these that stay with you long after the game is complete. We talk a lot about “set piece moments” in games today, but they were rare during the NES/SNES years. Nonetheless, I can think of a couple classic ones in this game! 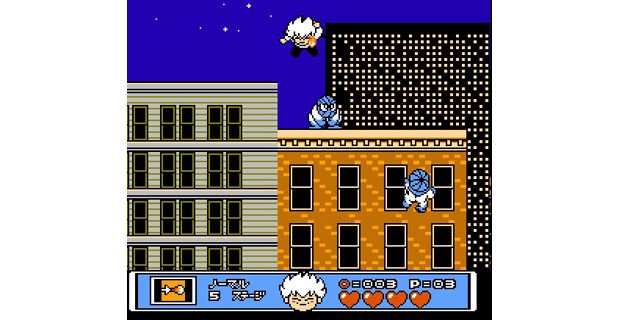 My favorite moment is a toss-up between the roller coaster and subway train rides. The roller coaster is expected, since the stage takes place in an amusement park. However, the ride itself is crazier than a shit-house rat. You are constantly in fear of losing your ground and flying across the screen, yet it never happens. As you are going through loops, you still need to battle enemies coming at you from all sides. It’s extremely hectic, but it wouldn’t be as much fun if it wasn’t.

The subway train, which precedes the quiz show “boss fight” in the NYC stage, is another key moment. It’s the classic “run on top of a moving vehicle while ducking underneath tunnel ceilings”-scenario we’ve seen in plenty of games over the years, but I struggle to think of one that predates Boku Dracula-kun. Even if one exists, it doesn’t take away the surprise of it being there or the fact that it’s one awesomely intense platforming segment.

I don’t feel bad about spoiling these two moments as the game is full of them. Before every boss, the game will throw some crazy stuff at you that will make you fret for your life, yet it’s always designed well-enough to keep you from falling into cheap deaths. Sadly, the same can’t be said for some of the platforming segments.

Boku Dracula-kun may not be a faithful adaptation of the Castlevania series, but it does share some annoying quirks. Like Castlevania, you’ll be stunned and fall back a couple steps when damaged. Thankfully, there aren’t many enemies that come right at you, but you’ll sometimes step back into a chasm and yell at the screen. The same can be said of some tricky sections that remind you of the wide gap between Mario and every other Nintendo platformer  — Dracula-kun is no exception. 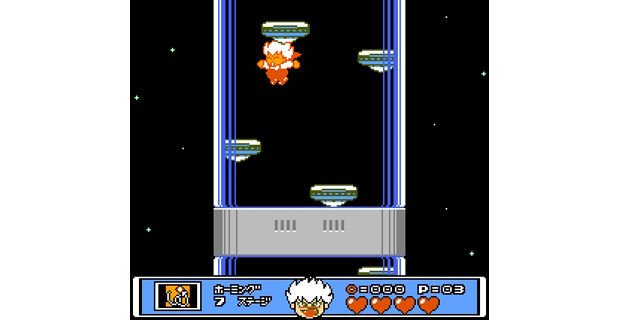 These are minor gripes for what is otherwise a near-flawless Nintendo platformer, which is surprising considering it’s the first one of its type that Konami made. Even similar Konami games that followed, such as Tiny Toon Adventures, didn’t live up to Boku‘s personality, level design, and soundtrack (did I mention how good it is?). The game’s aesthetic straddles a unique niche between horror and childrens anime. In fact, Namco’s Splatterhouse: Wanpaku Graffiti — another quirky Japanese title that never reached the States — is the only game that is remotely similar.

To be fair, Dracula-kun did reach the U.S., but not in the form some of us would like. The Game Boy remake Kid Dracula, released in 1993, took away certain levels, weapons, and enemies, and inserted new ones in their place. That game has a more coherent story, but it lacks the charm of the original. It’s also a much shorter, easier game. It’s not bad, but I wouldn’t recommend it over the first one.

There are few older franchises that haven’t been remade for current gen platforms in some way and even fewer that I’d really care to see make the transition. Kid Dracula/Dracula-kun is the exception. The game’s colorful world, likable protagonist, and unique design make it a welcome candidate for a 2.5D remake for current gen systems.

There aren’t many games that speak to the fun of a horror-themed world without the guts and gore. I love films like Monster House and The Goonies, and I struggle to see why there aren’t games of the same ilk. Well, Dracula-kun is just such a game, one well worth seeking out for fans of platforming and/or lighthearted horror.

Would you like to see a new Kid Dracula? Why or why not?

What are your favorite “lighthearted horror” games, like Dracula-kun and Wanpaku Graffiti?

Are you still recovering from the 500+ comment shitstorm that accompanied my last review?

[Those who defile my home shall feel my wrath!]