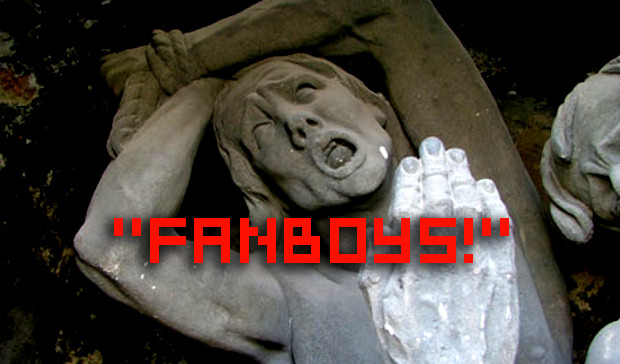 Earlier this week, I was having a conversation with ScrewAttack‘s Destin L about the gaming press, most notably about how so many videogames lately are getting incredibly high review scores, with nearly every major release apparently able to do no wrong — even though gamers themselves later come out to say such games weren’t even all that good.

As we theorized why this could be, I came upon the possible conclusion that positive press was being motivated by fear, and the more I think about it, the more likely it seems. As I scan the gamer community and find what seems to be a rabid and possibly deranged army of quasi-human attack dogs, it’s difficult to not draw a correlation between rampant fanboys going off the rails and a gaming press that doesn’t want to step out of line and say bad things about a game.

This article isn’t an accusation, and I don’t intend to point fingers at anybody. We are merely posing a question here. Is the gaming press scared of its readers?

We published an article yesterday that pointed out a number of game design tricks that developers use to falsely extend the length of their games. It was of course, merely an honest and personal opinion, but it seems that many among the gaming community don’t actually want honesty in their games coverage. They would rather only ever read the words of someone completely marching in step with their way of thinking. Thus it was that Mega Man 9 was criticized for something, without being written off as complete garbage, and a number of people flipped their lids.

It’s not just that they disagreed. Oh no, that would be too tame for them. Unlike those who responded to the article with respectful disagreement, a number of readers simply could not help themselves piling on the personal insults. Now, I’ve been doing this job for almost three years and I’ve been called every name under the sun. The constant stream of gay jokes and fat jokes and remarks about my ability as a writer is something I’ve had to get used to. That seems to be the wage of having a personal opinion and daring to share it.

That said, it really does get to you sometimes, and it wouldn’t surprise me if some writers see the pure vitriol and venom that gets poured all over their peers and decide that they don’t want any part of it. I get this feeling that a number of games media outlets see this kind of bullshit happening and will do anything to appease the wrath of a fanbase that, to be honest, is made up of a significant number of petulant and spoiled brats who seem to think that trying to be as personal and hurtful as possible is just punishment for someone not reacting to a game they like with complete adoration.

One of my favorite examples, of course, is Killzone 2, which has unfortunately become inextricably linked with insane and childish fanboyism. The notorious Totalvideogames.com review of the game gave it an 8/10, and it was followed by a 40-page-plus comment thread of some of the most insulting and disgusting bile I’ve ever been ashamed to read on the Internet. Who seriously goes into this business to be shat upon like that? I can hardly find it a stretch to imagine that people are writing just to give the people what they want, rather than what they think.

When I wrote my own Killzone 2 review and gave it a 9.5, it was suggested by some that I’d done so to avoid a shitstorm, very much like I’m theorizing here. I can’t convince you that I did not, and I also can’t blame anybody for thinking that was the case, especially as I’d had people before the review practically attempting to bully me into giving it a high score.

A number of games seem “protected” by their fans these days, and they will go out of their way to not just defend a game, but tear to shreds anybody who dares threaten the aura of perfection that they have surrounded their favorite game with. You can’t point out the myriad flaws in Fallout 3 without Bethesda fans going on the warpath. Woe betide any who dares to suggest that Halo 3 isn’t all that great. Let’s not forget those who spoke out about Sonic Unleashed … oh. Well maybe they got away with it.

I still remember the 8.0 Grand Theft Auto IV review we did, the one that someone said “flew in the face of popular opinion.” How DARE we do such a thing? How dare we turn the world on its head by having the gall to suggest that a great game should get a great score, and not a perfect one? Is it any wonder that the title received almost unanimous critical acclaim, with those kinds of reactions waiting in the wings for a less-than-perfect score? Again, many of the game’s reviewers may indeed have felt that it was the greatest game ever made, and a new Ocarina of Time for our generation. I am merely wondering aloud if the potential backlash from readers might have had anything to do with it.

I think the best commenters are the ones that impugn the writer’s “journalistic integrity” at the same time they are basically demanding to be lied to. I’m not sure if they’re aware of the blatant hypocrisy that comes with demanding integrity alongside insincere pandering, but it’s hilarious to see nonetheless. Then there are the ones that sidestep your writing and just go for you as a person. Apparently, the way you write gives people a deep insight into your personal life, and they’ll rake it up just because they disagree with you and can’t handle it. In many ways, these fanboys are acting like fucking terrorists … except somehow with even more sexual repression.

Who wants to deal with whining children on a daily basis? I don’t, even though most days I unfortunately seem to. However, in a business that is based on pageviews and readers coming back for more, I dare say a number of outlets will say or do anything in order to stop their fans from going elsewhere. I’ve had a number of readers tell me they would “quit the site” over a particular review, taking their business elsewhere like a stuck-up bitch who didn’t like their waiter in a restaurant. America especially has a “make the customer feel like royalty, even if they’re stupid trash” policy, and I think that can easily carry over into games media.

Without naming names, I’ve had some writers speak to me in the past and talk about being “worried” over an article they’re working on. The articles themselves have been perfectly fine — well written, honest and perfectly fair. However, they’ve been worried about the reader backlash because they really don’t like being called an “ugly fucking cunt with no talent” because they’re just doing what they love doing. One can, of course, just write it off with the attitude that “it’s just the Internet,” but show me someone who puts their genuine personality and face on the Internet and doesn’t get at least a little affected by personal remarks, and I’ll show you a liar or a psychopath.

It’s nothing new, either. Do you know why FOX News blames violent crime on videogames instead of stupid parents who aren’t living up to their responsibilities? It’s because FOX News is watched by stupid parents who aren’t living up to their responsibilities, and they don’t want to deal with the backlash. Why does the Daily Mail complain about immigrants? Because its readership is a bunch of fascist van drivers who have gotten it into their heads that England is somehow a “pure” thoroughbred nation. Most media outlets have forsaken honesty in the name of pandering, and I fear that games media is just the same — people not saying what they want to say, just what their followers want to hear.

I’m certainly not saying that everybody in the gamer community is this sniveling, crying, infantile little shithead, of course. I’ve had the privilege of getting to know some incredibly cool members of the community and having some intelligent debates with those who disagreed with one of my statements, but were able to not get emotional as if I just shot their mother in the head and fucked the hole. Sadly, however, these are not the people with the loudest voices. They are not the ones creating 40-plus-page threads full of abuse.

It is unfortunate, but I believe that a number of writers have resigned themselves to the fact that there are simply too many babies in the gaming community, and have started to just write to keep them from throwing a tantrum. It’s the path of least resistance, after all, and they still get paid at the end of the day, minus an army of feral kids snapping at their heels.

Who can blame ’em, really?