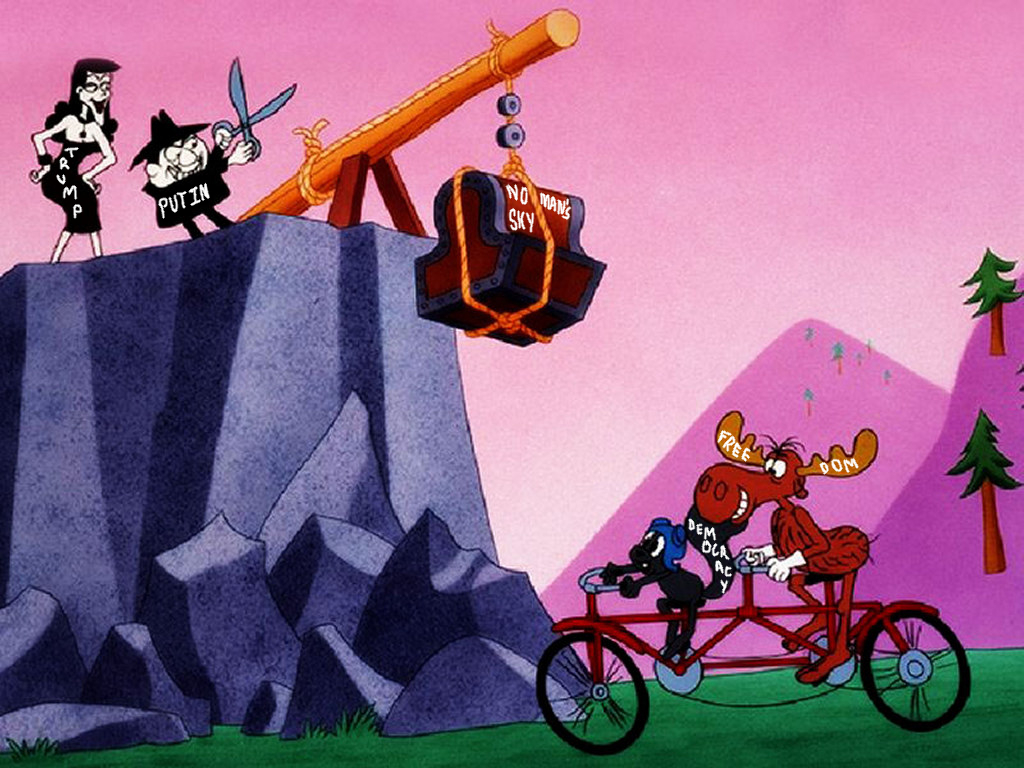 The United States is the gold standard for democracy, also known as a “representative democratic republic.” It’s why we are the freest country in the world and why we have almost 800 military bases abroad to make sure others are doing democracy right. If they aren’t, we can find someone who will for them, like a Yellow Pages or temp agency of democracy. The hundreds of billions spent maintaining these installations is a testament to our philanthropy, so that we may bring our freedoms around the world.

However, our democracy is under attack — at home. Last week the Washington Post dropped a nuclear bombshell: the Russians flooded us with fake news (or, “propaganda”) to elect Donald Trump president. The Post cites a mysterious, newly-established group (it joined Twitter in August) called PropOrNot which has identified 200 news outlets that are Russian plants, unwitting or otherwise. Some of them are even well-respected organizations that have been around for ages!

PropOrNot put these non-mainstream media outlets on “the list.” When some in the media argued “the list” smacked of Joseph McCarthy-era paranoid smearing and red-baiting, PropOrNot’s “collection of researchers with foreign policy, military and technology backgrounds” responded with a now-deleted tweet, “Awww, wook at all the angwy Putinists, trying to change the subject – they’re so vewwy angwy!!”

So the Washington Post, based on PropOrNot’s blacklist, has definitively proven that Russia got Donald Trump elected. Case closed. But what happens next will shock you.

Just one day after the Post’s Watergate-sized breakthrough, Hello Games broke months-long radio silence on one of the biggest releases of the year, No Man’s Sky. Tellingly, the so-called “Foundation Update” was announced with a short, sparse blog post that had almost no detail. It took another two days before Hello Games could cut a trailer detailing the changes.

The timing here is interesting. If Hello Games was trying to reinvigorate its fan base, why break a long period of non-communication to drop news of a huge update to one of the hugest games of the year on a Friday, the day most companies use to drop bad news they want swept under the rug? Why not wait until you have a post ready that actually details the changes, or the video, which is bound to get more excitement than text?

Could it be that the Foundation announcement was meant to distract from the Post’s brave reporting on Russian influence in our supposedly-fair-and-democratic election? As the experts at PropOrNot point out, some of the Russian propaganda arms don’t even know it; they’re known as “useful idiots.” Hello Games might not be taking money directly from Vladimir Putin — though they definitely might be as well! — but rather the company is being manipulated in a 12th-deminensionla chess move it isn’t even cognizant of.

Gamers represent a large voting bloc. It would make sense for Russia to orchestrate a move to try and distract the bloc given their Manchurian candidate’s tenuous hold on the office in light of days-long anti-Trump protests, the near-$7-million raised to fund recounts, and questions over the democratic nature of the Electoral College that gave Trump/Russia the victory, even though Democratic-nominee Hillary Clinton received more than 2.5 million more “votes.” And it wouldn’t be unprecedented. Russia itself was recently the target of a video-game-based CIA psyop meant to destabilize the country — Pokemon Go. Maybe that’s where they got the idea.