From the community blogs

As much as we all love the actual gameplay of various video games, there is no denying that the look and style of a game is becoming all too important. Even with that said, there are still naysayers out there who proclaim that gameplay is the unforgiving king of any good game and that the “artiness” that many games frequently present in modern gaming is unnecessary when such good gameplay is supposed to be the core of the experience. I agree with this to some extent. Gameplay is supposed to be the center of attention when you play a game; otherwise, why call it a game? I once spoke with a very outspoken and clearly disturbed “gamer” (who I am calling Flappy) and listened to him refer to Quantic Dream’s 2005 paranormal thriller Indigo Prophecy (Fahrenheit for non-US gamers) as a “Play” rather than a game. He said it wasn’t a game because you didn’t do anything except push buttons for the time-based sequences. I told him, “Well, yes, because it’s supposed to be an interactive sort of deal”. And after that I stopped talking to him because I could feel that he was about to rant about something especially since he mentioned the phrase “Metal Gear Solid” beside the word “awful”. One thing struck me though for the first time in my life: At least some people don’t like movie-like games.

But can I just ask something?

What do people watch movies for? The story or the moving pictures? The flashy explosions or the demonstration of skill in acting? 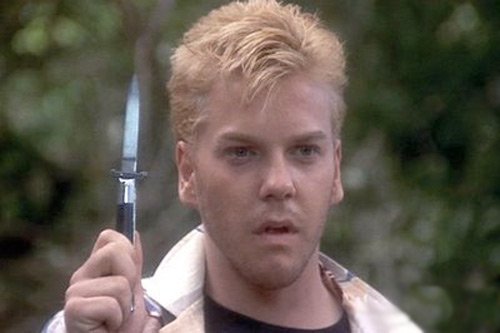 And before you say, “Well, Ras, all of them,” think about it. I know damn well that story matters more than the fact that there are things occurring in motion rather than some flipbook side-show story. I also realize that some people get off on the action that the Mr. Bays of the world seem to thrive on when creating films instead of recognizing superb acting when it happens. Not to mention, nobody goes to the theaters to see a film because it has 3-D despite the popularity it has. It will go away eventually.

So what? What does this have to do with games? Well movies and games are pretty similar. People watch movies for an experience regardless of which experience they’re wishing to…experience. In many cases they’re trying to escape from some crummy life of eating every cake Little Debbie has to offer while creeping around their humble abode. The same holds true for gaming except you can play with your Zebra Cakes while walking around your dirty-laundry festooned domicile.

Now Flaps had one thing right: Great gameplay is completely necessary for a great game. Just take a look at Big Rigs: Over the Road Racing and tell me I’m wrong. Even if semi racing is your thing you’ll be so disappointed that you’ll probably burn your rig to the ground after you’ve finished playing. Even well-known franchises like Sonic the Hedgehog (which is noted for having taken a downturn in the past couple of generations) have seen especially abominable games compared to the original versions, such as 2006’s supposed reboot to the iconic Genesis game. It just sucked as much as I wanted to like it.

But what about the other half of that coin? Are story and cinematic content just as equally important? Certainly not in the early days of gaming. The original Donkey Kong had literally no story other than the fact that an ape frequently kidnapped the girlfriend of Jumpman (now Mario). Or perhaps a better example is the original Pac-Man games (rather than the new abomination that Namco Bandai has cooking). Of course those are older games and technology has change quite a bit.

And then you have the perfect mixes of gameplay and graphical and artistic style, such as the first God of War. Oh, how I remember when that game first came out and I watched the coverage for the release on G4 TV (back when it was actually about games and tech) and how they did rave about that game. The gameplay melded with the cinematic qualities of a film, such as story-telling and camera angles, to make a game that I would dare say is one of the greatest of its day. In lieu of the advent of the player controlled camera, this particular game went for a camera that showed you something. Because of this, it became less about seeing the world around the character than showing the world around the character: A real cinematic touch to say the least.

And then this brings us full circle to the games that focus on cinematic presentation rather than focus on gameplay that so many of us know and love. If I can mention Quantic Dream again; their upcoming Beyond: Two Souls is looking mighty fine and I think everybody realizes that the focus is to present a film-like experience while giving the player the ability to manipulate and drive the characters. There is no denying that this is the goal especially because of the inclusion of real-life actors in the game as well as having their names appear on the box art as if it were a movie poster. This is extremely similar to the Metal Gear series where you always see “A Hideo Kojima Game” or “Directed by Hideo Kojima” at least four times between purchasing the game and taking control of Snake or Big Boss. The reality is that people like experiences and gaming just happens to be a fantastic medium for story-telling because of the adaptation of cinematography into games.

This may be the most redundant post you’ve ever read. Or it may be intriguing or enlightening. Regardless, it’s simple to understand that any game is a game regardless of whatever gameplay is presented. It is also a game even if it is an interactive, cinematic experience. As much as I want to see Xbox One fail because of my Sony and Nintendo fanboy-ism, I became so annoyed every time somebody would complain about Ryse: Son of Rome after they read some first impressions of its demo. While I have absolutely no interest in the game, I understand that quick-time event sequences have been included in many lauded games (Shenmue II anybody?) and that even with the reduction of true action-style gameplay, Ryse will be a game with a very cinematic essence and will have an audience with people who like that sort of thing.

Although it is certainly possible to have a very cinematic experience without the need for quick-time events. But there are many types of games for many types of players. So who am I to judge?