Weaver? I hardly even know her

I’ve been treating Alien: Isolation coldly. If I don’t let myself get invested or excited, I can’t be hurt. I think Alien is a perfect piece of film making. That doesn’t need, should never have been, a franchise.

I played one of Alien: Isolation‘s challenge maps. I don’t know if the entire game will end up being this good, but as a slice that demonstrates the mechanics and tone, it completely won me over and I’m dying to play the full thing.

I also died a lot in the challenge map. I played for about a half hour without getting to the end. I’d died as early as 30 seconds in. I’d survived as long as eight minutes. I was stressed out with a racing heart. I took the headphones off to wrest myself from Isolation‘s constricting, horrible world and struck up conversation with one of the developers to try and calm my nerves.

I mentioned reaching and turning on a generator, which opens an elevator. Have I just been floundering hopelessly? Actually, I had almost finished, he told me. I actually did better than most people. Only about 14 people had made it to the end of the demo all show. That was encouraging. I did one more run and finished in around 1 minute and 57 seconds. A few seconds off the best time.

I’m bragging, but not (just) because I’m an egotistical fishsock. It’s a challenge mode, not the main game, but I love how hard it was. How stressful it was. My first time through, I alerted the alien, freaked out, and tried to run away. A squelch and I couldn’t run. The camera panned down a bit to the spiked tail that pierced me. It retracted, leaving a a blood red hole. A hand crept in front of my face and the screen faded to black. It was chilling and oddly calming. Some of the alien kills were much more brutal. 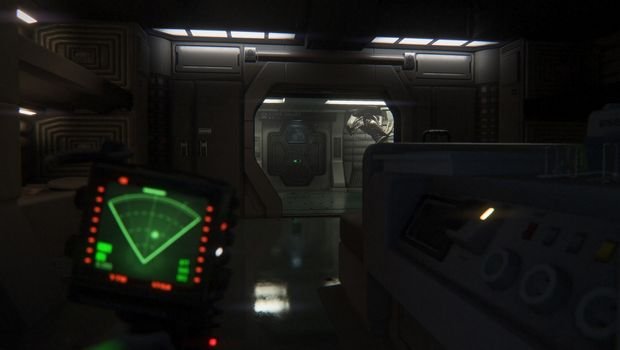 There was so much to like here. The map gave you a flamethrower at the onset, but I quickly learned it had as much gas for one, maybe two blasts. And because of the short range, you need good timing as the alien charges you. A well-timed blasts of fire will get it off your case for a little while, as it retreats into vents.

Entering a vent to get around? Terrifying. Initially, I tried sneaking around in vents to make my way through the demo, but the idea of being cornered in the vent or turning the corner and it being there freaked me out. The alien is huge, occasionally lumbering if you see it walking the halls, but also wicked fast, prone to disappearing and horrifyingly reappearing somewhere else. The motion tracker is invaluable.

When I took my reprieve, I also asked the developer for some tips, maybe something I wasn’t doing well. Use the motion tracker to see which direction the alien is going and go the other way, I was told. Sometimes it will sit in a vent, unmoving. It won’t show up on the motion tracker. You’d only know it’s above you by a thin line of spit hanging from above. Walk under and it will get you.

I love that Isolation has thoughtful, idiosyncratic mechanics. The tracker is one. While you’re holding it up (R1) and focusing on it, you lose depth of field. If you tap L2, the background will come back into focus. If you’re hiding in a locker or box and the alien is looking for you, you can hold L2 to hold your breath and use the left stick to lean away from the front of the door. Sometimes he’ll still find you.

The alien is on point. It cuts an impressive figure. It moves fast. It kills quickly. The tone is right. You are constantly under extreme pressure. The sound design is excellent. Alien: Isolation has the potential to be the second best piece of media in the series. Ten minutes after my heroic 1:57 run, after 30 minutes of intense failure, terrified “oh f**ks,” my hands were still a little shaky. My adrenaline was pumping.

Please be as good as this demo.