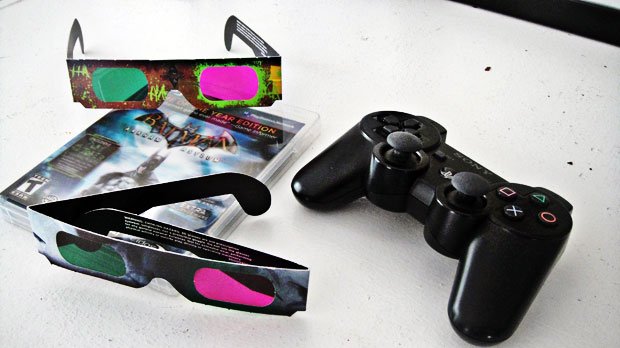 Packed with the original game, the disc (for both Xbox 360 and PlayStation 3) also includes additional content previously only available as downloads. The four challenge maps — “Scarecrow Nightmare,” “Crime Alley,” “Totally Insane,” and “Nocturnal Hunter” — are a nice addition to the already great gaming experience. But the real extra to note here is that Batman: Arkham Asylum can now be played in 3D, on any television, using the included 3D glasses.

How does the 3D look, and does it add anything to the experience? I took it for a test run. Impressions and more after the jump. 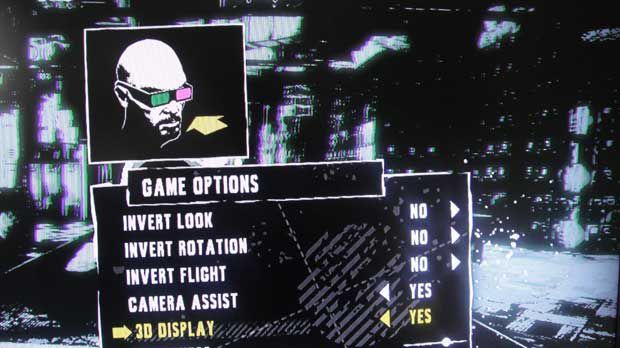 Without going into too much technical detail, the 3D utilized in Batman: Arkham Asylum Game of the Year Edition is a process called TriOviz 3D. The method allows developers to implement 3D stereoscopic tech into existing titles, leveraging depth-of-field to create multi-layered effects. It requires 3D glasses with pink and green lenses, two pairs (one Batman-themed, the other “Welcome to the Madhouse” Joker-themed) of which ship with Batman: Arkham Asylum.

The 3D effects in the game are fully optional, and can be toggled on and off in the options menu at any time. But when the game booted up and I was given my initial set-up choices, I immediately flipped on the effect and (as instructed) slid on the rather silly-looking 3D glasses.

As the game’s first cut-scene kicked in, I wasn’t sure if it was “working.” I didn’t see much of a difference, but was immediately surprised that the pink and green lenses didn’t interfere with the color quality much, if at all. As the camera panned across the Gotham City sky-line and the Batmobile raced through the city’s streets, I started to notice the subtle 3D effects. And I seriously mean “subtle.”

Because Arkham Asylum‘s cut-scenes were (presumably) not designed with 3D in mind, there was none of that “debris flying towards the screen” nonsense you get with content designed with 3D intentions. Instead, the Batmobile itself was felt slightly offset from the street, the buildings in the foreground of the sky-line “popped” more, and the gate leading into Arkham Asylum had clear and apparent depth. 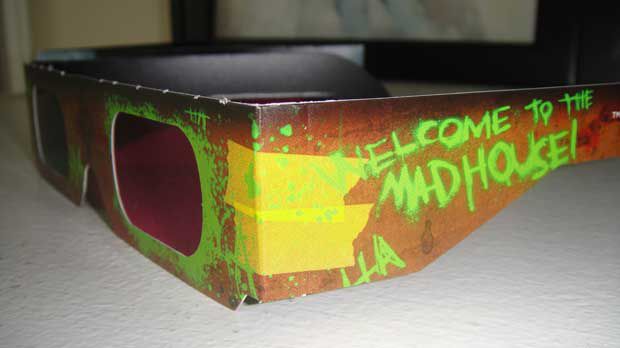 The effect was more obvious once the game’s long opening sequence kicked in. As I moved Batman down the halls of Arkham, following guards as we escorted a restrained Joker, there was some clear separation between the models and the game’s environments. It’s a bit of an odd effect, but surprisingly effective, almost as if you were looking at a diorama come to life on your television set.

As far as gameplay and immersion goes, once combat started up and I was controlling the on-screen action, the effects were still noticeable, but not as much. The issue here was that I was so focused on the action itself — my button inputs and the results of them — that I wasn’t really paying attention to the 3D effect all that much. It wasn’t particularly distracting either; remarkably, the hit that the image quality takes is very little. Colors are intact, if slightly muted; the overall visual quality isn’t quite as sharp, but maybe that’s the trade-off here for this 3D-for-all solution.

I suppose that’s the question, though. Are these trade-offs — slightly reduced image clarity and having to wear idiotic glasses on top of it — worth the 3D experience? It’s a novel effect, and I can see the appeal, but I’m not entirely sure it adds enough to the affect of the game to necessarily make it worth your time… at least in the case of Arkham Asylum, which wasn’t a 3D title from the jump. 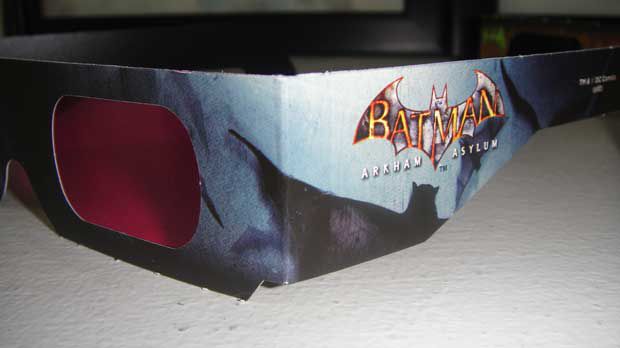 The tech industry is making a pretty big push for 3D gaming, with Killzone 3 recently confirmed and television manufacturers trying to convince me that it would be fun if it were just like sharks were swimming in my living room. (That actually frightens me.) I don’t believe it’s going to stop anytime soon. I know of more than a few games that are making the leap to 3D, some of them high-profile, multi-platform titles utilizing a range of 3D techniques. (Interesting note: Darkworks, the company behind the TriOviz tech used for Arkham Asylum, was at one point the developer of Ubisoft’s missing-in-action title, I Am Alive.)

If I came away with one thing from playing Arkham Asylum in 3D, it’s how damned good the game is, fancy glasses and effects or not. At $49.99, if you haven’t played or purchased the game, here’s your chance with some extra content and kinda-neat 3D for “free.” (Those who already do own the game, note that your save files won’t carry over; the Game of the Year Edition wanted nothing to do with my old files on my PS3.)