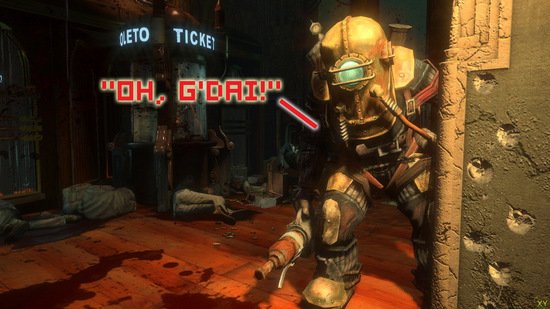 In a move that single-handedly eclipsed all of the creative achievements of the past decade or so, Irrational Games, a subsidiary of 2K Games, has been renamed. Irrational’s offices in Boston and Canberra, Australia getting the earth-rendingly original monikers of 2K Boston and 2K Australia, respectively, in order to reflect the studios’ “further integration” into the holding company’s similarly-named circle jerk.

The snuggling up to Irrational on 2K’s part seems to derive from the growing hype around BioShock, and who can blame them? The studio changes in name only (hopefully), and 2K gets a chance to associate itself with smart, progressive game design. Deep down in the collective industry psyche, a name like 2K Boston reminds people where BioShock comes from a lot more than the cooler-sounding Irrational Games.

“Irrational Games is widely recognized as one of the most innovative development studios in the world,” said Christoph Hartmann, President of 2K. “Following their incredible efforts in bringing BioShock to life, we are proud to make the newly renamed Irrational Games studios a cornerstone of our game development family.”

Recognizing the exceptional talent and creative vision that have made Irrational Games one of the industry’s premier developers, 2K Games has fostered the studio’s growth by substantially investing in its people, allowing Irrational Games to almost double in size since the studio’s acquisition by 2K in 2005. With the upcoming release of BioShock – one of the year’s most hotly anticipated titles – 2K Boston and 2K Australia, with the backing of 2K Games, are raising the bar for forward-thinking game design.

“We’re proud to be part of the 2K Games family and enjoy the new opportunities and artistic freedoms this strengthened relationship provides,” said Ken Levine, President and Creative Director of 2K Boston. “The name change signifies our growing position as a central part of 2K Games, and we plan to ensure our future titles continue to set new standards of quality and innovation for the industry.”