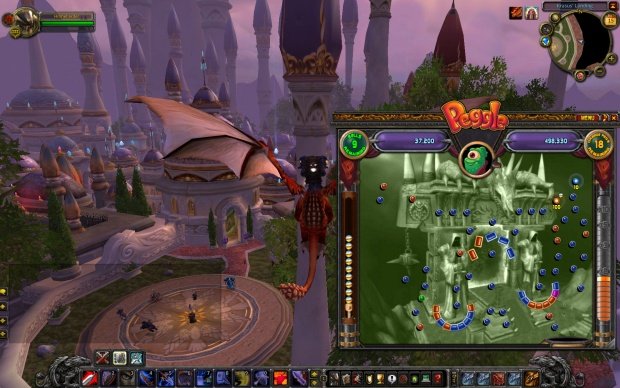 I don’t play World of Warcraft, but I do play Peggle, so I know all about losing your workday to a videogame.

This partnership kills the alt-tab action known to lovers of both titles. Just like Bejeweled being an Add-On, Pop Cap’s puzzler Peggle has joined in the fun. There are twelve stages in this add-on, and they’re all based on major locations in WoW. You can even duel against other players in WoW, going as far as to create custom leaderboards for your guild. A new command, /peggleloot, is a fresh way to use this game to “roll” for loot.

Pop Cap tells us that this add-on was developed by Michael Fromwiller, the guy that made the original Beshared and then later the official Bejewelled add-on. It turns out that he’ll be joining the ranks at PopCap full-time after he graduates in June. Congrats, Michael.

Filed under... #PopCap #World of Warcraft