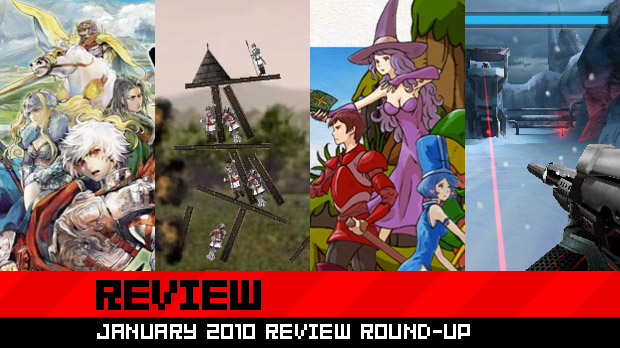 January 2010’s review line-up brings some pretty likable titles to the App Store, and we’ve rounded up some of them for you in a group review.

Two of this month’s titles from Square Enix, but the’re not quite role-playing games. Well, they look and sound like RPGs, and have art like RPGs, but they’re not. They’re both fun, though. There’s also a serious FPS and a no-so-serious catapult game. All great titles this month. I’m as surprised as you are.

On the menu for January:

What have you heard about N.O.V.A.? That it looks like Halo? That it’s the iPhone’s Halo? Well, that’s kind of right. But why deny that? That’s a great comparison, and N.O.V.A. is a great game. Clone or not, this is probably the most solid, well-crafted, tightest controlling iPhone first-person shooter out there.

Yes, you are a kind of spacey mariney guy, and yes, you’re blasting alien baddies with some pretty familiar looking guns. It’s actually unapologetic in its inspirations, but you won’t care once you get into it. You play as a former military man that is brought back in to investigate a space station that has gone wrong, and is about to cause trouble. You’ll change locales nearly a dozen times, though, all the while using shotguns, assault rifles, rocket launchers, plasma guns and more to do the FPS thing. It sucks you in before you know it. What makes it shine is solid storytelling, complete with voice acting and cutscenes. It really seems like a big budget game. How many iPhone games can you say that about?

What also makes it shine is exemplary controls; you won’t miss a step with N.O.V.A.‘s default control scheme. The virtual d-pad control is spot-on, as are the fire buttons and weapon functions. Aiming is tight and feels precise, though sometimes I wondered if I was being helped out a bit. The movement is forgiving, but not insulting. You’ll appreciate it when things get hairy, with multiple projectiles headed your way.

The word is “impressive.” Impressive polish and control, impressive storytelling and visuals. The originality factor? Not as impressive. But even with its obvious influences, N.O.V.A. is still a game that stands on its own, and is a game that is well worth your time and money.

Hills and Rivers Remain. What a name. It sounds fancy. It kind of is. The art and music are quite fancy, and is up to Square Enix’s role-playing console game standards. What isn’t fancy is the game play, which involves you poking at your iPhone screen for hours on end. It may not be fancy, but it’s totally addicting.

A couple of weeks ago I sat down to quickly check out HaRR at the end of a long work day, just to get a preview of what I’d be working on the next day. Four hours later I found myself sprawled out on my living room floor, still poking away at the screen. Hills and Rivers is a strategy game that has you flicking troops from one castle to conquer another, with the eventual goal of taking over an entire kingdom. You start with one castle. You’ll select a number of troops to deploy on grid-like maps and flick them in the direction you want them to attack. Each round, identified by a bar that encircles the playing field, replenishes your troops. You send more out, working to be both offensive and defensive, slowly taking over the continent.  As far as strategy goes, it couldn’t get more simple.

What I dig is that this game does not look like your typical iPhone strategy game. There’s a polish involved, and it extends down to great art and music and characters. There’s also a fully fledged dramatic story going on between maps, but it’s mostly forgettable. You won’t care about that, though. You’ll be too busy tapping around, panicked, eyes darting, trying to make sure all your bases are covered.

The maps are designed to be pretty challenging, so come expecting to have your balls busted. Some of them are a also little lenghty, so don’t expect to bust this out during lunch breaks. That said, Hills and Rivers Remain will keep you on your toes and keep you coming back.

By the name, and by first appearances, Crush the Castle may look like some medieval strategy game. It’s not. It’s a physics based catapult game where you launch projectiles to take down various castles. If it sounds silly, it is, but it’s also a lot of fun.

You’re up against some of the most poorly built castles ever as a trebuchet man, on orders from your thankless king to take them all down, moving from country to country with the eventual goal of conquering everything. Yep, it’s all on you, but no worries, because these castles are built about as soundly as a Jenga tower on underage drinking night. You’ll load up your olde tyme flinging device with rocks and whatnot. Tap once to initiate, tap again at any time during the arc to release your projectile. The “camera”  will follow your projectile to its destination, hopefully hitting the castle walls. Walls (and the people inside them) fall with somewhat realistic physics (advice: aim low and take out the foundation). Walls fall on people and they scream and die. It’s funny every time.

Take down a nation of castles and move onto the next. You get better projectiles as the game progresses, but the castles are also built better. You want to please the king, so you’ll try to take out the target in the fewest shots possible. When it gets into it, you’ll find yourself shooting over 20 times, pissing the king off. There’s always one survivor that just won’t die!

Crush the Castle sounds simple, and it is, but it’s also crazy addictive. The gradually increasing difficulty and the knock ’em down physics make this a game addicting enough to be called a battery drainer. And at $1.99? This is a no-brainer.

I’ll say right out of the gate that Sliding Heroes is not going to impress everyone. It does the trick for me, but I think you have to have an open mind and not take it too seriously. Note Square Enix’s “confidence” pricing of $2.99. That said, I’ve played this more than I’ve played any other iPhone game lately. I love it.

Sliding Heroes is a mix between a action game, a strategy game and a tilting puzzle. Using the iPhone’s accelerometers, you’ll tilt heroes that you summon to slide across a map, bumping them into enemies. That’s the action and tilting parts. The strategy comes in at summoning. You’ll need to summon the appropriate fighter to take down what’s on the map, much like a tower defense game. You’ll pick from a cleric, warrior, mage or lancer, being mindful of a summoning cost of each. Each have a hitpoint gauge, and each have strengths and weaknesses. Like any other strategy game, you can eventually level up your fighters. The goal is to take your fighters, take out all of the enemies on the map, and reach an exit. There’s levels that work toward a boss that is sure to exhaust most of your summoning points.

Sliding Heroes is cute, with colorful graphics and boxy little characters and enemies. The maps, which are essentially mazes, are vibrant and crazy, and sometimes really challenging. There’s cute art and story elements, all drawn in a tongue-in-cheek RPG parody fashion, and often pretty funny. In all, it’s a very light-hearted game. I say this because the game seems to disappoint as soon as you expect to play a serious strategy game. Forget formations and jobs — this is about sliding around and ramming into polygon oxen.

The tilt control is perfectly fine. I had no issues moving my fighters in the right direction. That said, sometimes it was hard to see what I was doing, as the tilt angle was so severe. It is adjustable, though, and I was able to find a happy medium.

You’ll find a huge, likable game in Sliding Heroes if you keep an open mind. If you’re looking for perfectly tweaked strategy gaming, you’ll need to look elsewhere. But if you’re looking for a fun and original game, slide this one into your pocket. Highly recommended.

8.5 — Great (8s are impressive efforts with a few noticeable problems holding them back. Won’t astound everyone, but is worth your time and cash.)