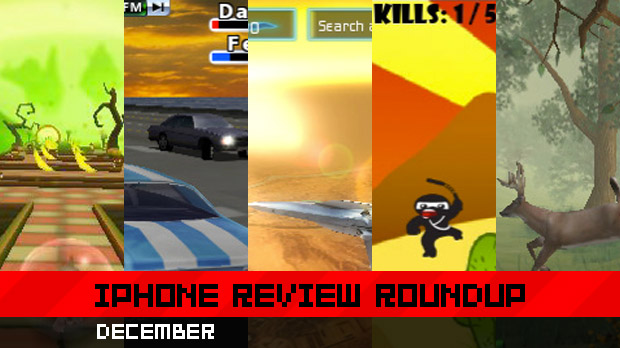 December brings lots of really strong iPhone titles to the iTunes App Store, and we’ve rounded up some of them for you in a group review.

Two of this month’s titles are actually ports or reworkings of big-time console titles. In both cases we were impressed with how they managed to shrink down games for the platform. There’s also the most rednecky game ever made and a comeback from one of the iPhone’s biggest launch games. It’s better this time.

On the menu for December: 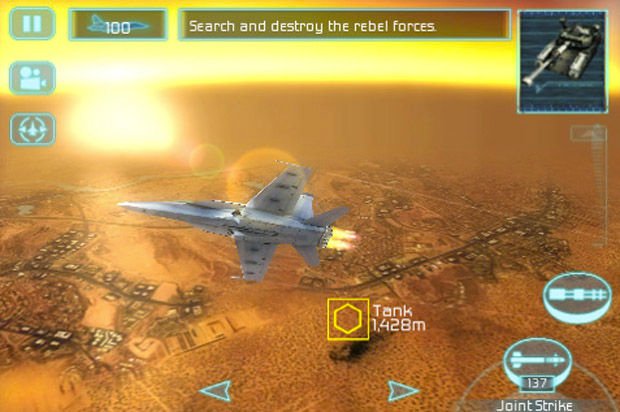 Play as Air Force pilot David Crenshaw, taking to the skies to play through over a dozen missions taking place all over the world, shooting things out of the wild blue yonder and feeling like a Top Gun-type bad ass. That’s what Tom Clancy’s H.A.W.X. is all about.Take the big ‘ol console flight/dogfight game and shrink it down to iPhone size was the idea here. And while it doesn’t sound like the best idea, when you play the iPhone version of HAWX, you’ll be glad they did it.

Compromises? I didn’t see any at all. The story and missions are all still here, down to the gorgeous pre-rendered cutscenes. The graphics aren’t Xbox 360 graphics by any measure, but wow, are they good. The planes shine, the real-world locales are nice, and the sunsets are gorgeous. And the control? Spot on, if you use the virtual stick control scheme. GameLoft apparently has the secret to iPhone controls, and they’re not telling anyone. The game puts up plenty of fight, but it has nothing to do with the control. There’s no online play, but I don’t think you’ll miss it here. Local deathmacth is a nice stand-in, though. Overall, H.A.W.X. is the type of game you’d hope iPhone developers are looking up to. It’s a big game in a little package. Recommended. 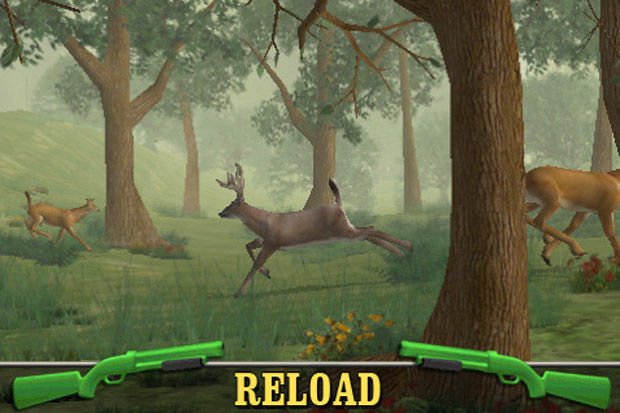 Let me be clear here: I’m not a redneck. I don’t shoot anything unless it’s in a Resident Evil game. And Hunting? No I get my food from the grocery store. I would probably be the last person to enjoy an iPhone game based off the Big Buck Hunter series of “Walmart arcade” games. Believe it or not, this is actually pretty fun.Remember Duck Hunt on the NES? It was fun, though it was never apparent why. BBHP captures this same feeling, except that your fingertip is the light gun.

You’ll pick from a variety of redneck-y locales to start your hunt. Deer and buck will wander in forests, and you’ll pick them off with your shotgun, reloading in between each shot. Don’t shoot the deer, though! There’s very solid 3D graphics and animation, which compares favorably to its arcade counterparts. Crazy as it sounds, it’s a total thrill to bag a buck in one shot. The farther removed you are from the redneck culture, the more you’ll enjoy the country music and voice overs. For me, they were absolutely hilarious. The icing on the cake is silly minigames where you’ll shoot groundhogs that shake their asses at you. There’s simple, fun arcade action to be had here. Don’t let the redneck thing hold you back.

7 — Good (7s are solid games that definitely have an audience. Might lack replay value, could be too short or there are some hard-to-ignore faults, but the experience is fun.) 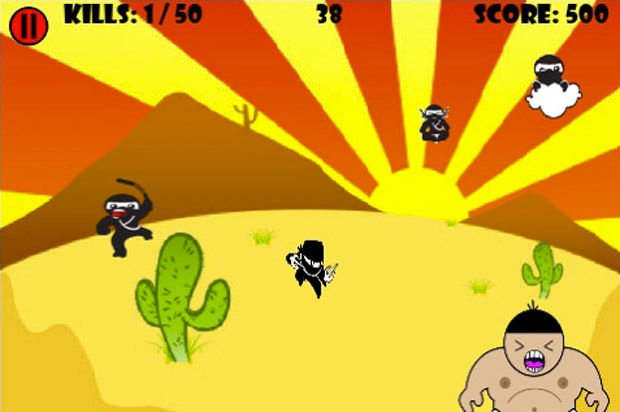 For every iPhone blockbuster, there are 50 more “just for fun” $0.99 games, and Crazy Ninja is one of those. If you go in expecting a deep experience, you’ll be diaspointed. If you’re going in expecting crazy ninja action? Well, you still might be disappointed.

The game has its charms, though. You use your fingertip to fling ninja stars at mostly static pop-up ninjas in levels of steadily increasing difficulty. The star throwing seems kind of physics based, so there’s a challenge in throwing them. Once you do get it down, you’ll be flicking your fingers at some of the strangest looking ninjas ever. They’re all happy and weird, and make strange noises. It’s one of those games that’s noisy enough to get other people looking at what you’re playing The crazy ninjas deserve to die because of this, I’d say.

Again, there’s nothing groundbreaking here. It’s fun, but the enjoyment wears off soon enough. It’s just worth the $0.99, I’d say.

5 — Mediocre (5s are an exercise in apathy, neither Solid nor Liquid. Not exactly bad, but not very good either. Just a bit “meh,” really.) 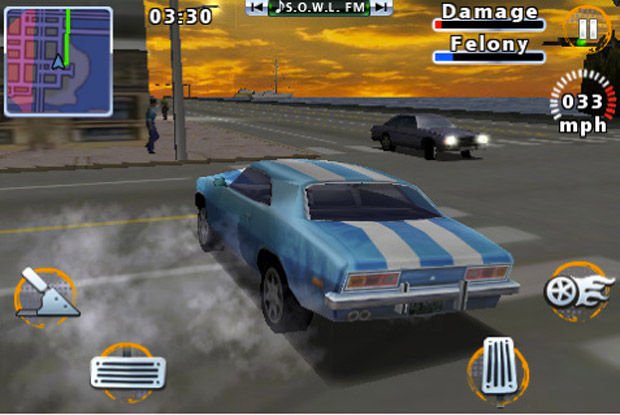 Did you ever play the PlayStation game Driver? This is the same game, on the iPhone. Wait! Where are you going? I’m not kidding. This is the same game. And since it looks like you’re not leaving just yet, I’ll sneak in that I think it’s probably even better than the original. No, wait! Stop!

GameLoft took the old (but still fun) game and polished it up with new models, art, and menu design, as well as iPhone specific controls, and released it to a surprised public. Why surprised? Because the game has aged well, and it plays fantastically on the iPhone. The undercover cop getaway/chase game comes intact with all of its original content, down to the cutscenes, meaning that this is a huge iPhone game. You’ll speed through real cities, doing your best to dodge the heat on your six, with controls that do not disappoint. Just skip the accelerometer control, though. The port is so tight that those that enjoyed the original can still feel the physics at work here. Impressive! It also looks better than the original, which makes it one of the best looking iPhone games out there.

Cops still ram your back bumper to piss you off, but you can now tune them out with switchable radio stations that play retro music. The top-notch faux hits really put you in the driving mood and sets the scene. Hats off to the composer. You’ll want to play this one with headphones on, as all of the selections are great.

Just think: a decade ago, Driver was a top-notch console game. Now it’s on your phone. I can’t get over that. I also can’t get over how great of job GameLoft did in porting this classic. Get this game. 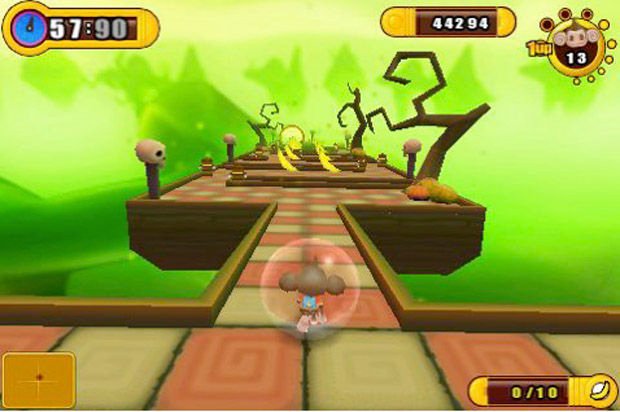 The first Super Monkey Ball was supposed to be one of those must-have iPhone games. The tilt-to-play accelerometer based control was a perfect platform showcase, and the design made it approachable to all. But what held it back was touchy and sometimes glitchy control. When it worked, it was fun. When it didn’t, you wanted to snap your iPhone in half.

In this sequel, you still tilt to guide your monkey-in-a-ball around dozens strange floating courses, working to avoid rolling over the edge and falling into nothingness, working to beat a ticking countdown timer all while steadying your hands. Now all you need to do is worry about getting to the end of the stage, though if you have time (and are brave enough), you’ll want to pick up bananas to earn extra balls. You’ll need balls, as this game seems to have ramped up the difficulty from its predecessor in the later stages.

The control seems more refined in this second game. A little meter on the lower left hand side of the screen shows the direction of your tilt, which helps when you become disoriented from trying to save yourself from another fall. Also, the accelerometer seems like it freaks out less now. Sorry if I don’t have a more technical term. You’ll still have the rare instance where the angle your phone is at leaves you craning your neck to see the screen, though. But we’ll take the control improvements — it makes the sequel much more fun.

There’s some minigame menu options, but they’re grayed out for now, and will be unlocked later. To make up for this silly choice, there’s wifi multiplayer functionality that lets up to four race through stages.

With the improved control, you can now feel like the blame is on the player when you lose, making this a much better game than the last. It’s crazy addictive, too.

7 — Good (7s are solid games that definitely have an audience. Might lack replay value, could be too short or there are some hard-to-ignore faults, but the experience is fun.)