Unlike the last time I tried to review a set if iPhone games, the experience of downloading the titles and installing them went perfectly. I was a little taken aback after the nightmare of the previous attempt, and I wondered to myself if this was a good omen for the games to come. Of course, I really can’t tell you that now, so allow me to digress for a second and talk about peanut butter.

I really like peanut butter. In fact, out of all the butter products that I can think of, I enjoy the peanut version the best. The biggest qualm I have with it is its calorie count. Two tablespoons of a typical peanut butter can contain between 200-300 calories. That’s insanely too much to pay for something so good. I wish I could say the price tag for one of Pangea Software’s two iPhone games has the same thing going for it.

Hit the break for the full reviews. 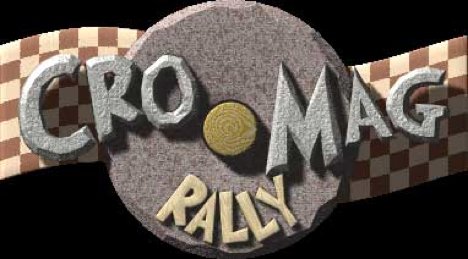 Cro-Mag Rally is like Mario Kart for the Super Nintendo Entertainment System with the same visual flair that Quest 64 had for the Nintendo 64. The only reason that I liken Cro-Mag Rally to Mario Kart is the fact that it’s a kart game. The fun of Mario Kart is not included in the package. The game features a total of two stellar game modes, both of which are essentially the same thing. In “Race” mode you are supposed to race against three AI opponents, while in “Gather” mode you gather up speed boosts to race against three computer-controlled opponents. It’s simple like a mobile game should be, but the controls and visual flair are about as hollow as a vegetarian burrito.

Cro-Mag Rally is based around the premise that potential consumers want to experience the opportunity to utilize go-karts in Stone Age surroundings with Stone Age scenarios. I can’t really think of a demographic that would enjoy this type of game, but then again, I would have never thought that furries would exist if I didn’t take a gander at the Internet every day or so. Interestingly, one of the levels in the game consists of racing around the Great Wall of China, which kind of throws away my argument for the premise. Regardless, the game is all about racing and it looks like trash. Backdrops are pieces of cardboard that your kart can get stuck in, and the levels appear to be designed by someone that forgot this game was going onto a mobile device. The majority of the races are long, boring affairs where you will be consistently last, even on the easiest difficulty setting. And that’s really the big problem.

The reason users will always be last is the very poor steering system. The game is built around the tilt functionality of the iPhone. Tilting the iPhone from left to right steers the kart as long as you have a finger on the throttle button on the left-hand side of the screen. Initially when booting up the game, I found it impossible to control. The sensitivity of the controls is up entirely way too high. After turning it down, I found that I was unable to navigate around the tracks successfully. The racing portion of the game worked at that point, but I lacked the sensitivity needed to navigate all the crap in the levels. The other big failing of the game is how undirected everything feels. On some levels, it’s hard to ascertain which route is the proper way to go and the placement of various objects around the game like mountains, blockades, and weaponry require some very nimble arms and fingers to navigate. I can’t even begin to speak about how many times I got stuck in a corner of the map between a hill and the border. It’s frustratingly dumb and representative of the experience Cro-Mag Rally experience.

Oddly, the last map of the game, Atlantis, is the best. On that map, players are given submarines to navigate through the fabled lost city. There isn’t a throttle and the full power of the iPhone’s tilt functionality is utilized. I found it very disturbing that I had the capacity to dislike every little piece of the game except the last level. My suggestion is to keep your money and buy a System Syn album instead.

Enigmo is a pretty hip puzzle game built around the physics of multicolored globules and the objects they interact with. Every game starts out with a container that infinitely tosses out little globules. The player must then take these globules to a depository located at the other end of the level via the utilization of specific tools that the game gives. These tools are usually planks, drums, and basins designed to repel or dispel the globules. The levels across the game are fairly diverse and the instrumentation put in player’s hands have a tendency to actually get the brain moving. It’s a very intense experience after finishing Cro-Mag Rally.

You move the various tools of the level by grabbing them with your finger and placing them around the map. I thought this was the biggest hindrance to the game. Fingers tend to have the ability to obscure, so when you’re trying to go fast to get bonuses, you’ll find yourself losing precious seconds to remove your finger to see which way the globules are bouncing off the object. The difficulty also ramps up very quickly, and I can easily see that as being a deal breaker for some consumers.  Most people are looking for quick, very casual games. Enigmo is not that at all.

One of the coolest things is that people willing to pay the initial price for Enigmo will be able to enjoy user-created levels for the game. My current favorite is the “Alphabet City” set that features levels in the shape of our favorite letters of the alphabet. Man, screw “Q.” Enigmo is one of the first iPhone games that I can firmly say “go buy it” if you’re up for some water-dropping, puzzle fun.