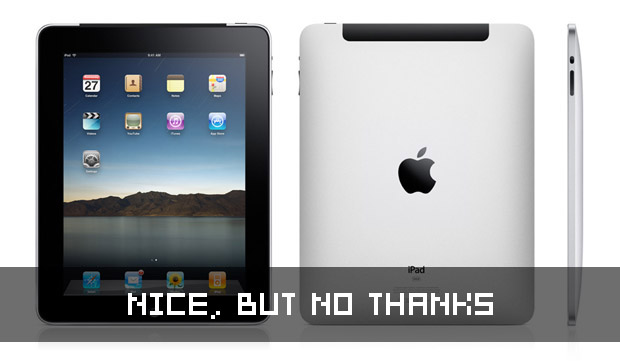 The ground did not shake and planets did not collide when Apple finally announced their much-rumored tablet computing device, the iPad, this week. In fact, unless you were an Apple product fanatic, this announcement hardly registered as little more than an tech-related blip in your readers and feeds. Actually, I guess the internet did slow down a little. Otherwise, big deal, right? And gamers? They heard about it, dropped some snark on Twitter, and then went about their business of playing games with proper buttons.

Oh, but what you call an overgrown iPod is going to be a big deal. A device that is the same size as a pad of paper, that can display movies and internet content, let you buy books and music, and make you look even more douchey in your favorite coffee shop? C’mon. You’re telling me this won’t be huge?  It will be. You just don’t know it yet. Just as Apple changed the face of mobile products forever, they’re also going to change the face of portable computing, like it or not.

But what does the release of the iPad mean for gamers? Well, it depends on what type of gamers you’re speaking of. The iPad is likely to change the face of gaming forever, but I wouldn’t count on it changing your gaming. Mine either.

Out of the box, the only gaming that this 1.5 pound, 9.7 inch touchscreen tablet computing device supports is backwards compatibility with the entire library of iPhone/iPod Touch games. In other words, it’s the same old games, just on a bigger screen. That won’t change gaming, you say. But it already has. From day one, out of the box, Apple will be able to say that the device has an available library of over 140,000 Apps, many of which are games. And as your libraries of software can be transferred from your iPhone to your iPad, there will be iPad gamers right out of the gate. Sure, it’s not a dedicated gaming device, but how many other portable game system makers would love to be able to say that there’s such a large, active userbase from the get-go?

That said, it’s understandable that gamers would look at this as a big to-do about nothing. I mean, they’re just iPhone games, right? Yes, but that’s the point. Right now, we gamers have this quantity over quality mindset about the iPhone game offerings. That’s not likely to change anytime soon, either. But don’t discount the power of built-in storage and both Wifi and 3G broadband internet connectivity (on some models). And having a software store hiding right under an icon right on the device? Brilliant. Let’s be real. You might not, but other people are going to buy these iPads. They’re going to buy games. They going to get gift cards for the iTunes store for their birthday. They’re going to buy more games. Lather, rinse, repeat.

Give it time. Users will feel even more comfortable dropping $6.99 on an App Store game knowing that they can use it both on their phone and their tablet. Eventually the numbers will speak to the game makers out there, much like they have for the iPhone and iPod Touch. More games will come. Better games will (hopefully) come.  In my mind I see an image of the near future: I’m in a Starbucks, and I’m blinded by the sun reflecting off the backs of dozens of iPads. They’re all playing $.99 games. In the background a guy crosses his legs at the knee and daintily sips his drink.

Not on board, you say? Wait. Are you one of the many that poked fun at Apple products, only to later find that you and your iPhone are never separated? Join the club. There are now millions that are happily wiping their face grease of that little pocket-sized touch screen surface to Tweet about how good their lunch was. Give it a few years and homeless people will have iPhones. What makes you think that the iPad won’t achieve the same sales numbers?  It’s the oversized button remote control of the mobile world. Seriously, though: calling it “an overgrown iPhone” may be ridicule from you, but it’s a selling point to the masses. That dad/uncle/brother that you can never pick out a gift for? He’s getting an iPad this Christmas.

Don’t underestimate the marketing power of a $50 billion company. Don’t underestimate the company that moved 250 million iPods so far. Yeah, I also thought that click wheel was stupid at first. Now your mom is calling anything that plays music an “iPod.” Of those eventual millions more Apple portable device users, many will buy games.  Apple has already made an effort to tie gamers to the product. They invited both Gameloft and EA to their launch presentation to show off new games. Those games may not speak to you as a core gamer, but they’ll definitely speak to techy little Timmy, soccer mom, office dad, and older guy with the Maserati and the popped sweater collar.

One more thing [ugh]: The iPad is less of a mobile device and more of a computer. The new SDK permits iPad specific games that will look more like computer games and less like iPhone ones. It’s possible that the iPod could bridge the gap and really flesh out those dwindling sales numbers for computer gaming. I know that’s a bit of a stretch, but look how quick netbooks took off. This could be the next big thing for computer gaming.

Either way, here it is, flat out: Apple has already sold a ton of games on a device we never thought they’d sell games on. This iPad is only going bring about more games and bigger sales numbers.

All of this said, how often do you buy and play iPhone games? Who is the customer when you really boil down all those sales stats? Sure, there’s a dedicated base of gamers that look to these multipurpose devices as the future of gaming, but I think the rest of us pick up App Store games like we would an interesting looking magazine out of a news rack. Cheap thrills. Time passers. Something cheap and novel. The iPhone is less of a gaming destination and more of a gaming alternative, and its big brother, the iPad, is already set to head down the same road.

Apple and any of the game makers working to publish games for the App Store have yet to show off that groundbreaking AAA title that is going to win core gamers over. And I don’t think that any one wants that, Apple included. I’d guess that Apple is quite happy with their varied game offerings appealing to the masses, which means that casual games are the focus. Rather than win a few million picky gamers over, if I were making games for a couple of hugely popular portable devices, I’d aim for the big numbers. I’d aim for the casual crowd. Shit with polar bears always sells well.

Apple is not expecting gamers to drop $600 on an iPad. Of course, they’ll be happy if you do, and they know you’ll pick up a couple of games, but they’re not going to make games for gamers. In time, one of the many developers will, but even then, it’s going to take a lot more than that to win over your typical core gamer. I’d go as far as to say that Apple would need to make a dedicated gaming device to make core gamers perk up and listen. They know how tough that is, though, so don’t count on that.

Look at what is big right now in gaming as you and I know it. Sure, casual games are huge, but the types of games you and I play are not likely to show up on the iPad. Modern Warfare, BioShock, Left 4 Dead and even Super Mario Bros. Big franchises with big budgets a history of quality and…buttons. They’ve tried first-person shooters and survival horrors and platformers, but none of those work as well as their counterparts on consoles and computers. Granted, a bigger screen may help, but I think better games will go farther toward that cause.  I think that one untapped (no pun) avenue, MMOs, shows some promise for winning over gamers. A massive multiplayer touchscreen adventure could be very interesting. Someone has to make it first, and someone else has to put up the servers.

It would be hard to quantify the reaction of the gamer collective to the iPad announcement. I think it’s safe to say that no one was very excited, though. I want to say that it was mostly negative, but that may just be how it looked from where I’m sitting, in my gamer chair writing for my gamer blog. To be fair, there was some excitement, and with most of us not having used an iPad yet, it’s still to early to call. I also think it’s safe to say that as it stands now, something pretty big would have to happen for the iPad to change the way the core gamer plays. Book reading and mobile computing is one thing, but gaming is a completely different beast.