Whenever something gross comes up about a women being objectified or treated poorly, a stock response is often, “You wouldn’t bother talking about this if a man were the victim.” Well, let’s take a look at The Boyfriend Trainer, a mobile game that, quite frankly, is pretty damn icky!

“Crack that whip and teach your guy a thing or two about being the Perfect Boyfriend,” boasts the game’s description. “When scolding doesn’t work, just zap him, whack him and train him to be your ideal man!”

Subscribing rigidly to ideals codified in the 1950s, your hunk of malleable man-clay is prone to making messes, which the women always have to clean up (I think we’re supposed to laugh at that wry observation). The answer, of course, is domestic abuse! Smack him if he drops something, slap him for looking at any other woman but you, and strangle him while he’s driving. Every good relationship thrives on a healthy mixture of intolerance and physical conflict. Just ask my parents!

The game’s drawn the attention of both Buzzfeed and Jezebel, neither of which find the app particularly tasteful. 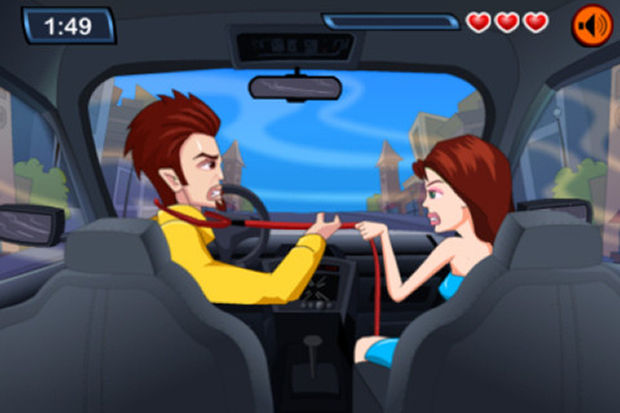 “There’s no way this app would fly if the ‘Perfect Girlfriend’ was the one being strangled, and this shouldn’t, either,” writes Katie J.M. Baker.

Developer Games2Win clearly hoped that, by reversing the roles, it’d get past the radar, but its scheme seems to have not worked out so well given the negative attention it’s received so far. That said, one iTunes review seemed particularly enamored with the whole thing.

“This game is fun I lik to see the boy gettin hit by the girl,” beamed Ms. Caline.

Apple’s approach to controversial apps is to remove those depicting realistic uses of weaponry in an encouraging manner, and strangling a man with his tie while he’s attempting to drive may well qualify. Then again, the boyfriend in question looks like a cross between David Bowie and Satan — a combination so ethereal in majesty it might be deemed too fantastical a scenario to face Apple’s banhammer.