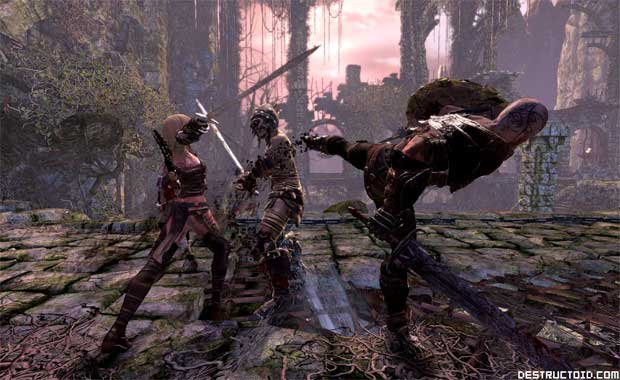 “What would it be like to take the classic dungeon crawl and bring it today’s technology? That kind of classic gameplay, that immersion of the ‘creeping around a dungeon’ experience?”

That’s the question asked by inXile Entertainment’s Bryan Fargo, who founded the company back in 2002, following a long history as CEO of Interplay. About two years ago, Fargo and the team at inXile came up with its answer — Hunted: The Demon’s Forge, a cooperative third-person action title set in a dark fantasy world.

To publish the game, inXile teamed up with Bethesda Softworks, which Fargo sees as the perfect fit.

“Of all the publishers, they remind me most of Interplay in a way,” he says. “They’re a very focused company, they do great quality stuff, and they only behind a few things each year. So it’s kind of perfect for the kind of blood and sweat that we’re putting behind this.”

inXile and Bethesda showed off the results of the blood and sweat at GDC last week, giving us a first look at Hunted in action. Hit the jump for the first details and impressions.

Hunted‘s tale begins with the corruption of the dark ages, with appalling creatures known as the Wargar terrorizing and kidnapping townsfolk across the lands of Kala Moor. With promises of riches at the end of their journey, mercenaries E’lara and Caddoc head out to uncover the truth behind the rise of the Wargar.

That’s the setup for Hunted, ripped from the pages of a classic fantasy tales of old. So I was a bit taken aback when I was immediately reminded of Epic’s Gears of War when inXile fired up a demo of build of the game for us in a behind-closed-doors first-look meeting. That “look” is familiar — the game uses the popular Unreal Engine 3.0, which inXile says was “perfect” for what it wanted to do.

“We could spend all of our energy on the graphical fidelity of the project and the design, without having to fight with what the engine can and can’t do,” he Fargo. 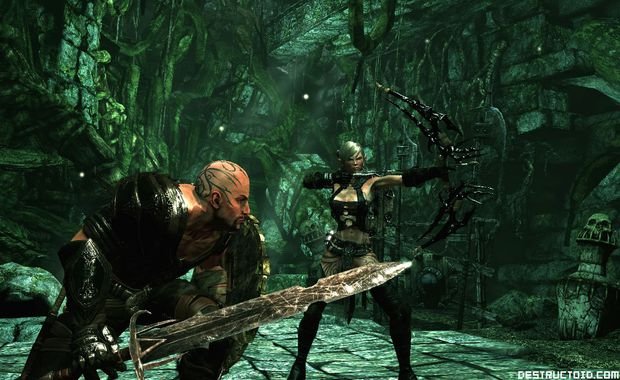 So the game looks great in action, with all of the visual “bells and whistles” updates inXile had hoped to bring to the genre. But there are other similarities, particularly when it comes to one of the game’s focuses — action. Hunted even features a Gears of War-inspired run-and-cover mechanic; E’lara and Caddoc hide and duck behind stone, peeking out to fire arrows at incoming enemies.

But really, that’s where the major similarities end, as inXile worked hard to make the game a truly cooperative experience using familiar dungeon crawler elements. While both characters have similar core abilities — ranged, melee, and magic — its their strengths that set them apart from one another, forcing players to work together. E’lara excels in ranged attacks with her bow; Caddoc is more proficient with melee attacks.

This encourages players to truly collaborate, while not keeping them attached at the hip in the game’s sprawling spaces. inXile points to this, and calls it “co-op at a distance.”

“We look at a lot of co-op games that were out there,” says the game’s director, Michaal “Maxx” Kaufman, “and we found that they did a lot of tethering of the players. We took a different approach; we wanted to spread the players out, use the environment, use the world. So the spells and skills that we created are based on these ideas.” 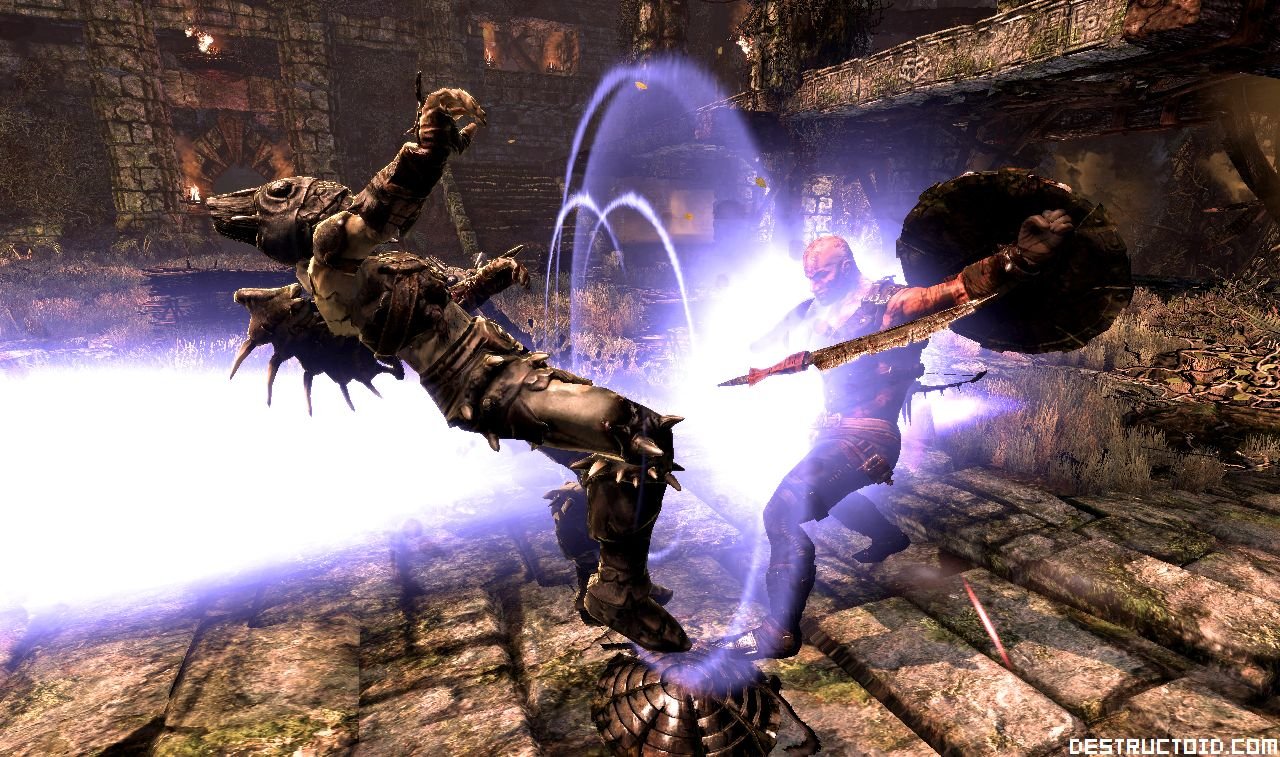 In the example area we’re shown, E’lara casts a spell called “Frost Arrow” which freezes an enemy from a distance. Up close to the action, Kaddoc comes in for the kill, using a melee attack to smash the enemy to bits. In a later example, Kaddoc uses a levitate spell that raises enemies within his radius in the air, while E’lara takes them out with arrows from afar.

This idea of co-op at a distance is also applied to reviving a downed partner. Each player can hold up to three tonics which can be used to ressucitate a fallen comrade from near or from far. Sure, you’ll be able to walk up to them and revive them as you would in other third-person cooperative action games. But in Hunted you”ll also be able to toss them a tonic from a distance; if you can them, you can revive them.

inXile says that the gameplay experience will feel drastically different when using either E’lara or Caddoc, and have tapped 80s body-swapping flick Trading Places for an interesting in-game player-swapping mechanic. At any checkpoint in the game, players can quickly trade the characters they’re playing as. Using this, you’ll be able to experience the game from both angles, taking advance of melee and ranged combat, as well as each characters’ specific magic skills.

Hunted’s not entirely about combat, however. inXile says that exploration and puzzles are also a big part of the experience, as well. You’ll be able to find new weapons and items hidden throughout the world, and will be faced with puzzles to unearth some of the more rare items. inXile says the puzzle difficulty will vary — 40 percent easy, 40 percent chellenging, and 20 percent for only the super hardcore players. 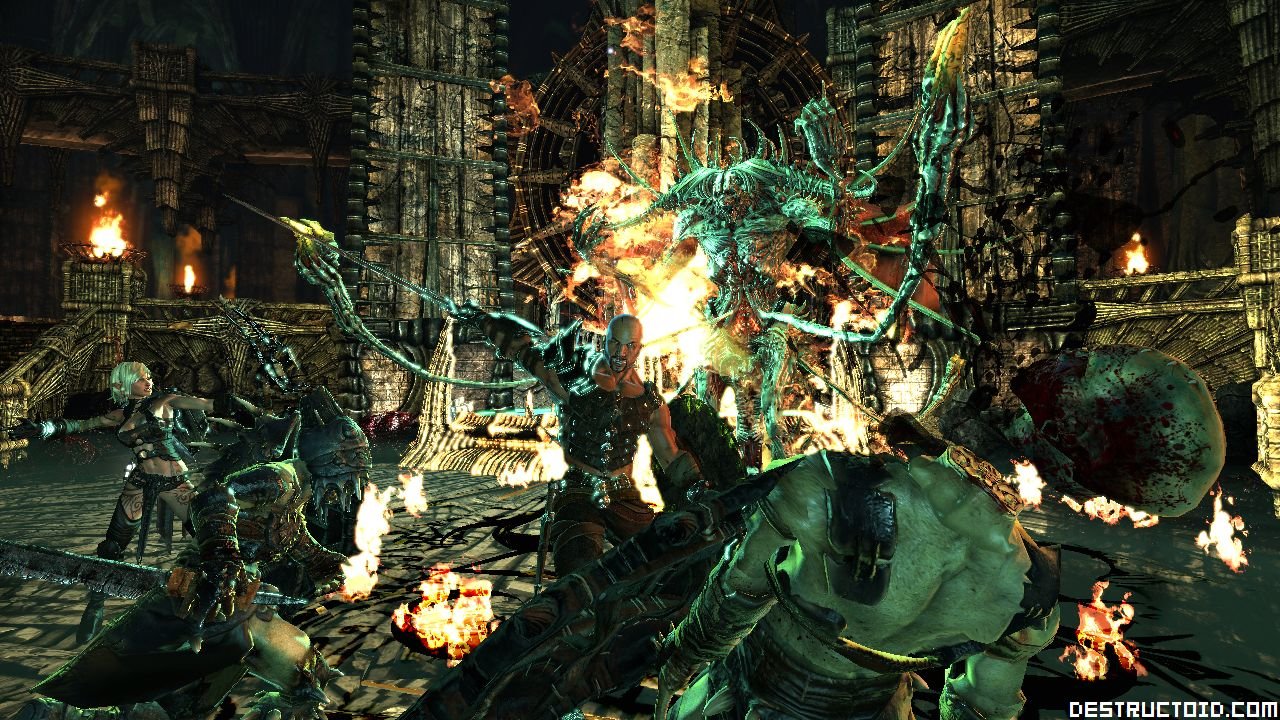 The puzzle we saw was dead simple — a talking wall with one flaming eye bellowed “Stand before me and fill me with the fire of your courage.” E’lara pulled a flaming bow from her pack, firing the shot into the empty eye, opening up a new path to explore.

Hunted can be played both online with a friend, or offline solo. No, there will be no split-screen mode included in the game, so don’t expect to be dungeon crawling with your buddy or significant other on the couch. According to inXile, split-screen would have meant making compromises to the game’s graphical fidelity, which the developer felt was out of the question.

inXile looks to appeal to two camps with Hunted — fans of the old school dungeon crawler and fans of modern action titles. It straddles a fine line between the two, that could appeal to both crowds, but potentially alienate both. Based on the hands-off demo, Hunted does look heavier on the action than the exploration. But inXile promises a nice mix, and with its dungeon crawler pedigree, it’s likely it’ll hold up its end of the bargain.

Hunted: The Demon’s Forge is scheduled for release on Xbox 360, PlayStation 3, and PC.