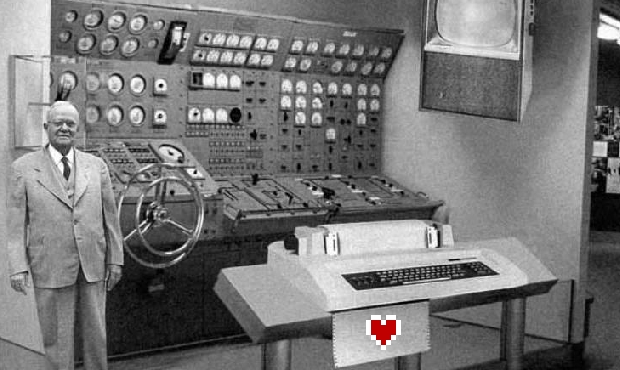 Regardless of whether you love it or hate it, this weekend marks the return of everyone’s favorite polarizing holiday, Valentine’s Day! While most people could care less about the “holiday” (me included!), certain companies thrive off the extra business they receive around this time of year. Restaurants overbook, flower shops sell out of everything, and, in particular, dating Web sites get their best traffic of the year!

But in a shocking display of segregation, these matchmaking sites only apply to real-life people. Trying to enter the personal information for videogame celebrity Pac-Man, for example, only results in multiple error messages.

Well, I am here to put a stop to all this discrimination. If your cougar aunt can get setup with her perfect mate, why can’t some of the world’s most popular videogame characters! To remedy the situation, I invented a brand new matchmaking computer that only works with videogame characters (humans be damned!).

Curious as to how my new, revolutionary invention works, I plugged in the personal information of several of my favorite videogame characters, hoping to find their perfect matches. Based on looks, likes, dislikes, and sexual turn-ons, I wanted to see who each of these characters are destined to spend the rest of their digital lives with.

Hit the jump for the romantic (and sexy!) results.

The computer’s matchmaking process could not be simpler: plug in the picture and personality info for each videogame character, wait for the computer to (slowly) process the results, and — bam! — a scientifically-produced result prints out in the front of the machine.

I wanted to do all of my favorite videogame characters, but, well, this still-unnamed computer of mine takes about six days to process one result (it also blows the fuses in my house with each use), so I only had time for a handful of matches.

Here are some of the most interesting pairings:

Cooking Mama is not just hot and spicy … she is downright insane! As long as Peter Pepper can deal with her crazy flaming devil-eyes, Mama — and her meticulous, seductive cooking skills — is the perfect match for the stoutly chef from BurgerTime.

Two videogame characters have never seemed so perfect for each other. Simon Belmont loves his whips just as much as he loves his women with a sassy attitude, and Franziska comes equipped with both.

Wow. Not only is this computer amazing at making matches, it doesn’t discriminate between species. Good for you, matchmaking computer! You’re so open-minded!

But this unique pairing also begs the question: Karnov and Birdo sex: hot or terrifying?

Both of these cavemen know what it’s like to fight off hordes of nasty dinosaurs with nothing but the loincloths around their waists (and the occasional stone hatchet and big stick). And nothing brings two people together like ridiculously stereotypical portrayals!

Large and in charge! Sure, there are women of all sizes who may have matched up with the classic Punch-Out!! character, but I have it on good authority that King Hippo likes a woman that appreciates eating the pineapples that fly out of his head when he is punched. The matchmaking computer knows its stuff!

Also, they are both royalty! How perfect!

Nothing says “the future” like two homosexual robots falling in love. Yeah, sure, both of these lovable metallic videogame heroes may not be gay, but that doesn’t stop the matchmaking computer from making shameless judgment calls!

And, let’s be honest, Chibi-Robo and Clank would be pretty great together, right? Best crossover game EVER!

Taiz Hori is known as the legendary star of classic arcade game Dig Dug, but he has aged quite a bit over the years. It comes as quite the surprise that the matchmaking computer would setup the young, vibrant Jill — the heroine of Game Boy Advance game Drill Dozer — with Mr. Dig Dug himself. It is known throughout drilling circles that Taiz’s son, the much younger (and much more handsome) Susumu Hori — of Mr. Driller fame — would be the much more obvious fit.

But who am I to try and predict true love?

This is my favorite match so far. Q*bert and Lala would be an adorable couple, living in a house made out of colored blocks and making a beautiful life together.

And can you imagine how precious their kids would be? Little balls of cuteness!

Okay, I take it back: this is my favorite pairing the matchmaking computer has made so far. Two classic adventure game characters from LucasArts’ two best games, listening to heavy metal music, and discussing motorcycles and piercings as they fall madly in love.

The matchmaking computer did not provide the details of which specific Contra soldier should pair up with which Ikari warrior, but I just like to think of their first double date as a glorified key party. Basically, anything goes.

Seriously. Terrible hair. They are meant for each other.

Um … this result is either horribly inaccurate or absolutely amazing. Reality tells me it is the former … but my lower pants area is (literally) pointing to the latter.

I want to vote “absolutely amazing,” but it looks like something might be wrong with this computer. Sorry, Brad.

Okay, as I read back on these results, I think I have come to the conclusion that pairing up videogame characters is just as hard as matching up real-life humans. With a little tweaking, though, I think I can get this computer to work just right. Check back in a few months when I give the matchmaking computer (Version 2.0) another go.

What do you think? Are you impressed by the computer’s matchmaking skills? Would you purchase one of these lumbering mechanical Cupids? Who do you think some of your favorite videogame characters should end up with?