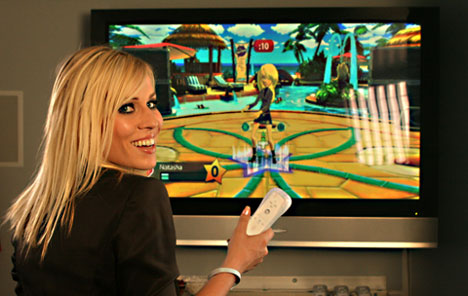 Who the the hell is Bedingfield? She’s that blonde who sings the song about opening up dirty windows and feeling the rain on your skin. It’s called “Unwritten.” It’s a hit. The kids are listening to it. This is a huge coup for Electronic Arts’ marketing department; this game is going to sell millions.

“Boogie SuperStar brings to life all the fun and excitement of performing,” said Bedingfield. “Being on stage is such a thrill and it’s great to be a part of an EA videogame that lets girls experience how much fun it is to express themselves and explore their own creativity by performing.”

Old news, Natasha: Carmen Electra did that in 2003 with her The Lap Dance & Hip-Hop workout DVD. We attempted to contact our tween correspondent Taylor Tiffany for comment, but school’s in session and she won’t be available until after cheerleading practice this afternoon. Rah rah, go St. Anna Prep Walruses!

Bedingfield, who has topped the charts with number one singles and albums in both the U.S. and the U.K., has joined forces with EA to promote the game, which allows girls to perform their favourite Bedingfield songs including her current single Angel, Love Like This, and the title track from her new hit album Pocketful of Sunshine.

“Boogie SuperStar brings to life all the fun and excitement of performing,” said Bedingfield. “Being on stage is such a thrill and it’s great to be a part of an EA video game that lets girls experience how much fun it is to express themselves and explore their own creativity by performing.”

In Boogie SuperStar, players don’t just play along, they are the star of the game. Girls will have a blast belting their favourite tunes into the microphone, and performing real dance moves that are captured on screen using the Wii’s motion-sensing technology and the journey to stardom doesn’t have to be a solo! girls can also sing and dance with or against their friends in fun competitions that show off their singing and dancing talent.

“Boogie SuperStar represents a new level in the convergence of games and music,” said Steve Schnur, EA Worldwide Executive for Music and Marketing. “We have combined the very best interactive capabilities of the Wii technology with the Boogie brand to form an unprecedented soundtrack featuring the hottest new tracks made famous by the biggest artists in the world. We’ve been actively involved in Natasha’s career since its inception, and we’re proud to have a star like her actively involved.”

Featuring nearly 40 of today’s hottest tracks plus additional tracks for an International version, Boogie SuperStar will have girls bursting with excitement as they discover they can both sing and dance to their favorite songs in one game.